Sunny Leone in Song with Diljit Dosanjh for Arjun Patiala

"Sunny plays a small town beautiful and traditional Punjabi girl which is very close to what Sunny’s core is,"

Bollywood acting star Diljit Dosanjh is set to share the silver screen with the one and only Sunny Leone. The duo will be seen together for a song and dance number in Diljit’s upcoming movie Arjun Patiala (2018).

According to DNA India, a source close to the film production added that the actress will be dancing along with Diljit to a sizzling dance track that is set to be shot in the first week of July.

The shoot will take place over three days on a special set that is being put up in Mumbai. Directed by Rohit Jugraj, the comedy film Arjun Patiala will release on 13th September 2018.

Undoubtedly Sunny has built up quite the reputation for her mesmerising item numbers for Bollywood films. This includes her sultry songs for Emraan Hashmi’s film Baadshaho (2017), as well as Shahrukh Khan’s Raees (2017).

Aside from ‘Laila Main Laila’ and ‘Piya More’, Sunny is also known for her lead roles in the likes of Beiimaan Love (2016), Ek Paheli Leela (2015) and, of course, Ragini MMS (2014) where she made her name with the Kanika Kapoor track, ‘Baby Doll’.

For Arjun Patiala, fans will see Sunny playing the part of Baby Narula. Film producer, Dinesh Vijan explained a bit more about her character in the film. He told media:

“Sunny’s character goes by the name of Baby Narula and is a beauty parlour owner, whom Arjun Patiala helps out.”

“In a special appearance, Sunny plays a small town beautiful and traditional Punjabi girl which is very close to what Sunny’s core is.”

Vijay Ganguly, known for his work in Jagga Jasoos is reportedly choreographing the dance number.

Leading the film is the superstar of Punjab, Diljit Dosanjh. The Sajjan Singh Rangroot actor plays the role of a quirky, small-town policeman alongside Fukrey star Varun Sharma.

Dilwale star Kriti Sanon will also join the Punjabi star for the comedy. The actress, who recently dazzled at the IIFA weekend in Thailand is currently preparing for her 2019 action film, Panipat.

Following his Bollywood debut back in 2016 with Udta Punjab, Diljit has become a popular choice for Bollywood.

Check out the video below to see Diljit Dosanjh promoting Soorma. 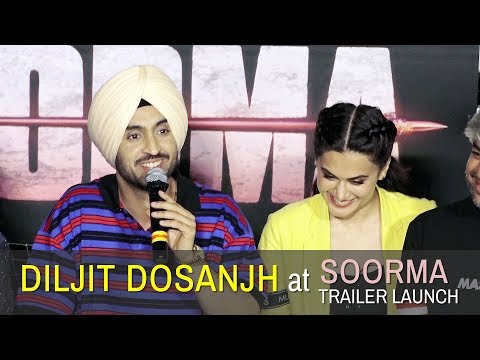 Once the film releases on 13th July 2018, Diljit can turn all of his attention to his upcoming role in Arjun Patiala.

His dance number with Sunny is one that many fans will definitely be looking forward to.

Promising non-stop laughter and entertainment, plus a special appearance from Sunny Leone, the film is sure to be yet another hit for the Punjabi actor.

Winners of IIFA 2018 Awards
What did Priyanka Chopra’s Mum think of Nick Jonas?