After Priyanka Chopra introduced her love interest Nick Jonas to her mother, the couple has been seen wearing matching gold bands. Is an engagement close?

"We just had a great time. She's a lovely person and I'm dying now to go to India."

Priyanka Chopra, 35, has sent the media into a frenzy when she was spotted wearing matching gold bands with her love interest and singer superstar, Nick Jonas.

After the 25-year-old singer was introduced to PeeCee’s mother recently, fans have been consumed with rumours that the two might be getting married soon.

Now it’s been revealed that they are wearing matching rings and meeting each other’s families, these rumours may have some real truth behind them.

According to a report in Filmfare, Priyanka has planned to get engaged to Nick in July or August 2018.

Many people have speculated that this was the real reason behind PeeCee introducing Nick to her mother, Madhu recently. 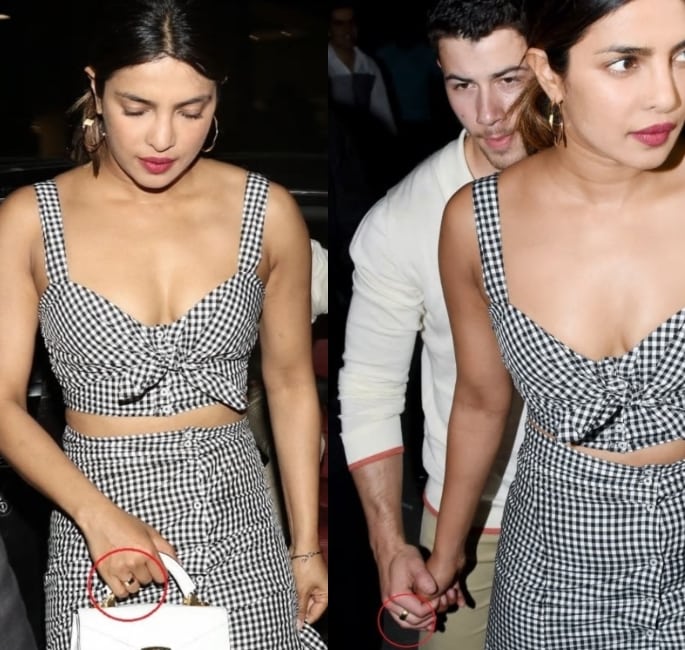 It’s clear that from these images, the rings are not engagement rings. The couple were wearing their rings on their right hands and on different fingers. Therefore, we can be fairly confident that they are not engaged quite yet.

However, whilst they may not be engagement rings, there is speculation that they could actually be ‘promise rings’ instead.

We now know that the rings are matching and the couple are getting their families involved, so it seems that the relationship is certainly taking a serious turn.

Promise rings are often used to signify a promise of engagement and seem to have become more popular in recent times. In place of getting engaged so soon, the couple may have chosen to adopt promise rings instead.

The couple has been spotted on many occasions together. After meeting at the 2017 Met Gala, they seem to love each other’s company.

From spending Memorial Day weekend together through to attending family functions including weddings and holidays, they are inseparable.

In an interview, Nick revealed that it was Priyanka’s Quantico co-star Graham Rogers who introduced them. He said at the time:

“We met up in New York the first time and the same day I think we found out that we are both going to the Met Gala with Ralph Lauren. And as strange as it sounds but we couldn’t have planned it.

“We just had a great time. She’s a lovely person and I’m dying now to go to India.”

From this point, their relationship has dramatically progressed since dating rumours first began. Since rumours of their romance surfaced, fans have been unsure about the stars as a couple.

Now, the possibility of an engagement and subsequent marriage between the two stars has caused an even bigger divide in public opinion on social media.

One Twitter user was pleased for the actress, but warned that Nick would “have to deal with the wrath of desis” if he breaks the loveable PeeCee’s heart.

“I am happy for her . If he break her heart he have to deal with the wrath of desis. And we are all around the world and we can be terrifying if we want to.”

I am happy for her . If he break her heart he have to deal with the wrath of desis. And we are all around the world and we can be terrifying if we want to ????? pic.twitter.com/ccqzOMioq6

Whilst some comments were clearly jokingly aimed at Nick, other tweets expressed pure happiness for the smitten couple.

In response to the Filmfare article suggesting the couple were getting engaged in a month, another user simply wrote:

“Wowww.. can this be true please.”

Some users were surprised but in support of the engagement, whilst others seem doubtful of whether the relationship will work.

Another Twitter user made it clear that they were a fan of the couple. However, they also seemed to doubt how well suited the two stars were. They said:

“I like them, but they just don’t go together.”

I like them, but they just don't go together.

It seems that Twitter is host to an array of divided and varying opinions on the suspected engagement. However, despite these comments and opinions, the couple seems happy enough as they are.

Whether a wedding is imminent for Priyanka Chopra and Nick Jonas or they are simply enjoying spending time together, it’s clear that their relationship is becoming more serious.

Nevertheless, we’ll be keeping a close eye on the two stars. We’re keen to see whether the near-future holds an engagement or wedding for them.