‘The Cut’ apologises for Racist and Sexist Priyanka Chopra article

‘The Cut’ published an offensive article about Priyanka Chopra which echoed sexism and racism. The online site has since removed the article.

"Nicholas Jonas married into a fraudulent relationship and I'll tell you why I think so."

New York Magazine’s online site The Cut published a piece on Tuesday, December 4, 2018, about Priyanka Chopra which received a huge amount of backlash.

In the article titled ‘Is Priyanka Chopra and Nick Jonas’ Love for Real?’, celebrity writer Mariah Smith questioned the relationship between the Bollywood actress and singer.

It was a piece which alleged that the actress was a “global scam artist” who manipulated a young, rich white man into marrying her against his will.

The article began with: “Nicholas Jonas married into a fraudulent relationship against his will this past Saturday, December the 1st, and I’ll tell you why I think so.”

It went on to say that she wanted to get married to a white man in order to punch her ticket to the top in America and painted Nick as a victim.

Smith’s written theory on Priyanka’s marriage caused anger among many people who addressed the sexism and racism which was prevalent throughout the article.

The article, which was heavily updated and later deleted entirely, portrayed Chopra as a fame-obsessed foreigner who has set her sights on America after establishing herself in India.

Smith’s article echoed post-colonial racism throughout despite being an ethnic minority in America herself.

It also mentioned the noticeable age gap between the pair, alluding to the idea that she tricked a younger and more naive man.

It is a bold claim which looks to be untrue as both clearly look in love, judging by the way they look at each other, as well as the fact that both families have been incredibly supportive of the marriage. 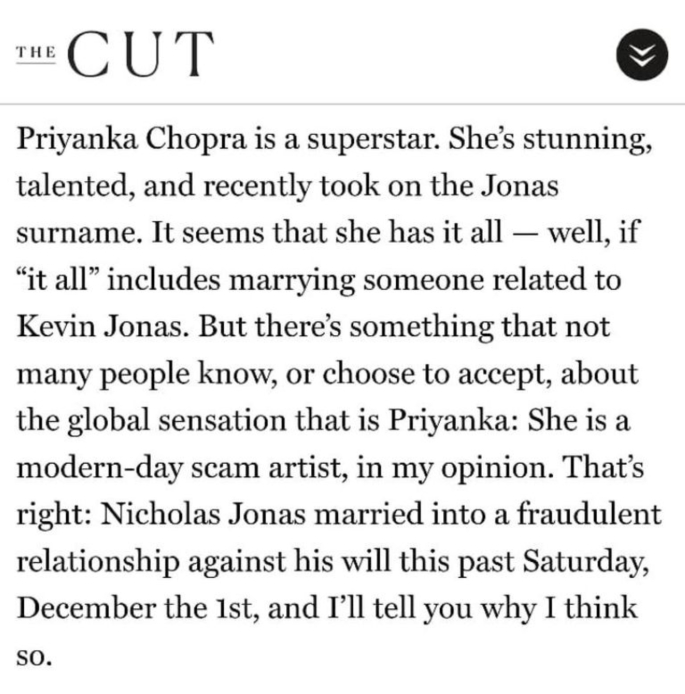 After removing the article, The Cut addressed the offensive story on their site stating:

“Last night, the Cut published a post about Nick Jonas and Priyanka Chopra’s relationship that shouldn’t have gone up. We’ve received dozens of messages from readers expressing their anger.

“We want you to know that we hear you and we’re sorry. The whole piece missed the mark. There is no good explanation for this other than human error and poor judgement.

“This was a mistake, and we apologise to our readers and to Priyanka and Nick.”

This was the only statement the site posted, however, they did not address how offensive and racist this story was, nor did they explain how it managed to get past the editors.

The article offered nothing to support this theory other than the fact that Priyanka is a self-made celebrity who enjoys her wealth.

Smith also focused on the fact that Priyanka is Indian and that the couple hosted their festivities in India.

One documented part of their wedding was Nick riding a white horse into the ceremony, something which seemed to be mocked by Smith.

“She’s a scam artist who never even took the time to make sure he was comfortable riding a horse.”

It is something which the writer assumed but was incorrect about as Priyanka specifically asked Nick about the subject in an interview for Vogue USA in January 2018. 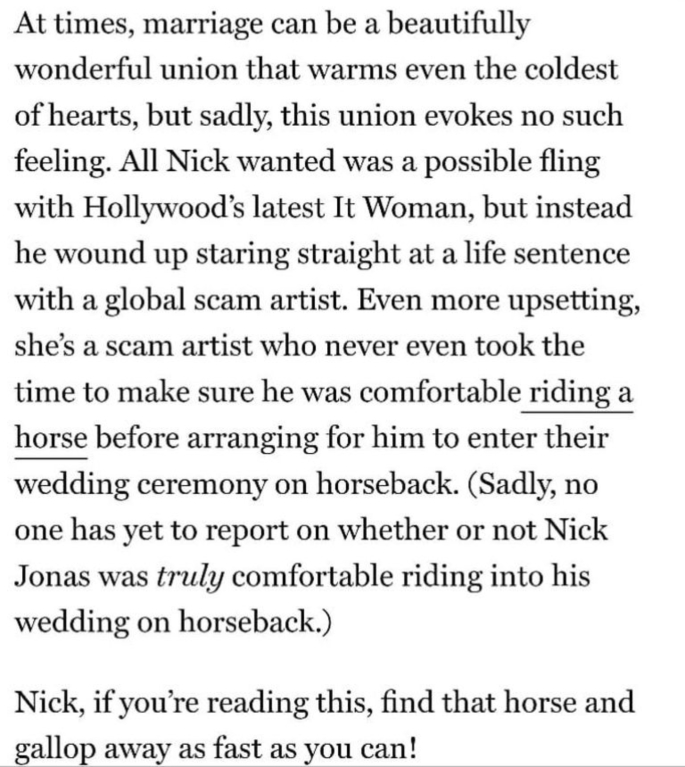 Despite the wrong statement, Smith continued with her assumptions by ending the article and advising Nick:

“Nick, if you’re reading this, find that horse and gallop away as fast as you can!”

It is clear that this article has been purposely laced with bitterness towards Priyanka, an Indian woman who has made it big in America by “scamming” Hollywood.

According to Smith, Priyanka cannot have a “normal” wedding and cannot fall in love with a man 10 years younger than her.

Priyanka’s lavish wedding may have been heavily covered and may have annoyed some, but to target a successful Indian woman who has married a white man is offensive, to say the least.

This is coming from a magazine that talks about taboo issues in the hope of making women’s lives better.

Despite removing the article, many have called out the article for making personal attacks on Priyanka.

Fellow Bollywood actress Sonam Kapoor, who is known for taken people on for their sexist comments, wrote on Twitter:

For a publication that “shows women’s what they are made of” @TheCut has a lot to answer for . The article on @priyankachopra was sexist , racist and disgusting. Also it’s written by a woman which is so sad. It reeks of envy and bitterness. @mRiah shame on you! https://t.co/bmbbX7LrAT

Nick’s brother Joe Jonas and his fiancée Sophie Turner both expressed their anger at the article’s personal agenda against Priyanka.

Joe wrote: “This is disgusting. The Cut should be ashamed to have someone write such evil words. What Nick & Pri have is Beautiful Love. Thank u. Next.”

“This is wildly inappropriate and disgusting. Very disappointed that The Cut would give anyone a platform to spew such b*******.”

While Nick has not commented on the article, Priyanka has reacted to it in the best way possible. She said:

“I don’t even want to react or comment. It’s not even in my stratosphere. I’m in a happy place at this moment. These kind of random things can’t disturb it.”

One thing to point out is that the site never posted such an article about Preity Zinta when she married her American partner Gene Goodenough in 2016.

This is possibly due to Zinta not having as much of an impact in America as Chopra has, who has expanded her acting ventures into the USA with success.

The Cut’s article has elements which may be interpreted as racist, however, that is not the main agenda.

The intent is bitterness towards someone from India who has broken the glass ceiling in a white, male-dominated industry.

This has resulted in a personal attack on Priyanka Chopra which was in poor taste.

The piece also showcases an ignorance over the wider customs of Indian culture as it acknowledged Priyanka as a brown Indian, yet forced upon her the expectations of Western traditions.

It has been sceptically written with no additional research. Smith mentioned the short timeframe between the engagement and wedding.

In India, the gap between engagements and wedding ceremonies are short and Priyanka’s decision is no surprise, her parents were engaged 10 days after meeting each other.

The only potential point which is valid is how their private moments are making money.

But rather than developing the point, it delved back into vile stereotypes about immigrant women marrying white American men.

The article is just one example of the type of ignorance relating to Indian traditions which is a constant battle.

Priyanka’s spotlight in the mainstream media was subjected to toxicity and while the article has been removed, the question arises – will there be further consequences for the site and for Mariah Smith, the author?

Dhiren is a journalism graduate with a passion for gaming, watching films and sports. He also enjoys cooking from time to time. His motto is to “Live life one day at a time.”
Masala Awards 2018 Highlights and Winners
Yash Chopra’s 7 Best Bollywood Romantic Films