Deepika has blasted US media after an incident where photographers ended up calling her “Priyanka”! The unbelievable moment has been captured on video.

Every brown girl does not look the same. Don’t mistake it. Let’s try and tell us apart."

Deepika Padukone has criticised US media after getting mistaken for fellow Bollywood star Priyanka Chopra. She has gone as far as to call the unbelievable mistake as “racist”.

She made the strong comments after an incident where she arrived back to the US. Upon leaving Los Angeles airport, photographers appeared with their cameras, ready for a snap of the star.

However, they made a massive error by calling her “Priyanka”.

Getting mixed up with Priyanka Chopra, the photographers continued calling Deepika the wrong name as she walked from the airport to her car.

Now a video has surfaced showing the embarrassing moment.

During the actual moment, Deepika remained completely silent. However, with a complete stoic blank look on her face, one can understandably see why Deepika may not want to respond to the photographers. 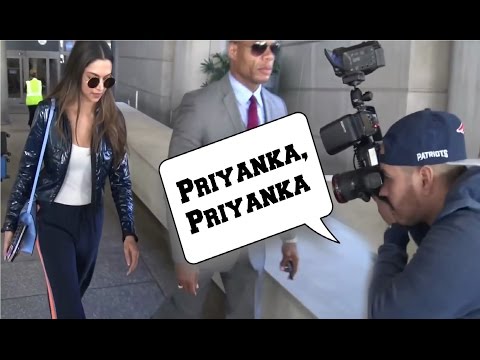 However, she has now commented on the incident. And she doesn’t hold back.

At an event on 5th May 2017, she blasted the US media for their massive error. Deepika said: “Not just me or Priyanka (Chopra), everyone in this room should be offended because it is racist of them to call two people from the same country by the same name.

Priyanka Chopra also gave her thoughts on the issue too. When asked about the incident by Bollywood Life, she explained:

“I did see that (video) and you know that’s just ignorance and it’s not right. I guess I’m the most popular brown face that everyone has known.

“Every brown girl does not look the same. Don’t mistake it. Let’s try and tell us apart. That was not right and it’s not fair she’s a massive star from India.”

Both celebrities raise important points. They are equally popular stars in Bollywood and now, they have a rising status in the US. It’s not a matter of who has more popularity, the US media should recognise Deepika and Priyanka by now.

Could you imagine the scandal if photographers had mixed up Jennifer Lawrence with Cara Delevingne?

With Deepika now making strong comments on the incident, perhaps the US media will wisen up on who they are photographing. And call them by the right name.