Shilpa Shetty admits she “made a mistake” in Cryptic Message

Amid the controversy surrounding her husband Raj Kundra, Shilpa Shetty has indirectly admitted to “making a mistake”.

“Made a mistake but it’s okay.”

Bollywood star Shilpa Shetty recently admitted she “made a mistake” in a cryptic message on Instagram.

Shetty is currently involved in an ongoing controversy surrounding her husband, Raj Kundra.

Police recently arrested and jailed Kundra for his alleged involvement in a pornography racket.

The house Kundra and Shetty share was also raided by Crime Branch officials.

Although Shilpa Shetty has addressed the scandal directly on more than one occasion, she often shares cryptic messages through social media too.

The excerpt begins with a quote by Italian actress Sophia Loren, which reads:

“Mistakes are part of the dues one pays for a full life.” 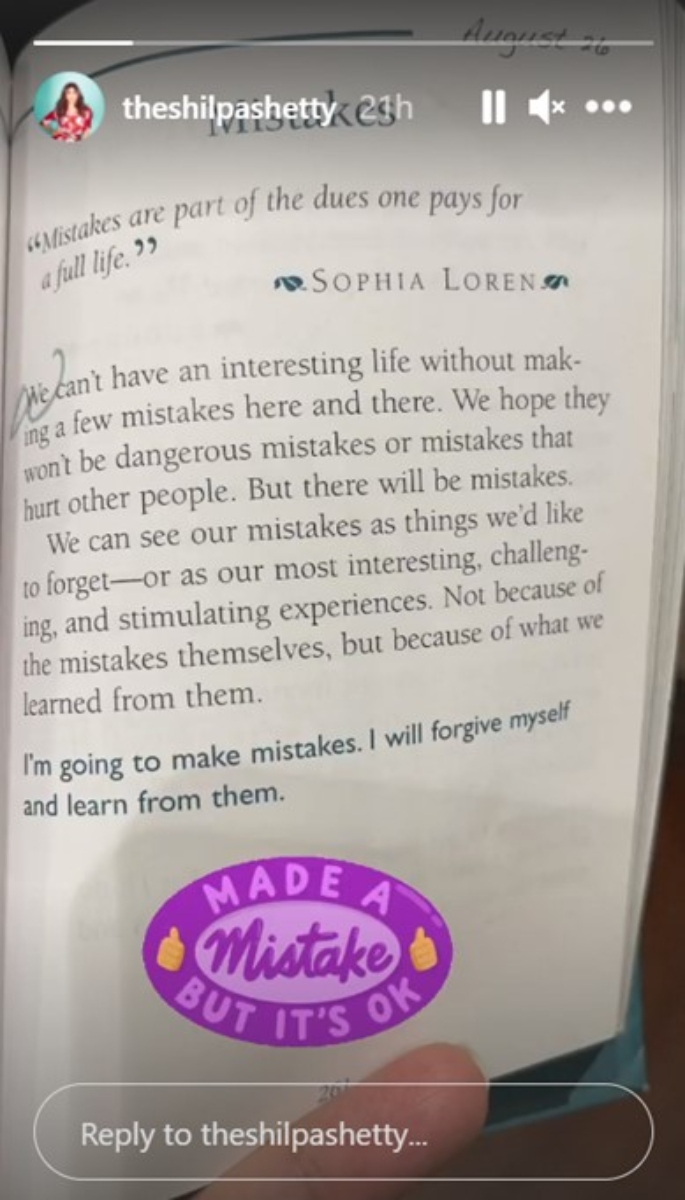 The excerpt itself reads:

“We can’t make our lives interesting without making a few mistakes here and there.

“We hope that they won’t be dangerous mistakes or mistakes that hurt other people.

“But there will be mistakes.

“We can see our mistakes as things we’d like to forget or as our most interesting, challenging and stimulating experiences.

“I’m going to make mistakes, I will forgive myself and learn from them.”

Shilpa Shetty clearly had a specific mistake in mind when uploading her post, but she refrains from mentioning it.

Instead, she added a sticker that reads: “Made a mistake but it’s okay.”

Shetty and her family have faced major backlash since the news of Kundra’s potential involvement in a pornography racket broke.

Therefore, her statement urges readers to refrain from trolling both her and her family online.

Shetty asks her followers to “respect our privacy for my children’s sake” and “refrain from commenting on half-baked information”.

The end of her statement, which she posted to Instagram on August 2, 2021, reads:

“I am a proud law-abiding Indian citizen and a hardworking professional for the last 29 years.

“People have put their faith in ME and I’ve never let anyone down.

“So, most importantly, I request you to respect my family’s and ‘my right’ to privacy in these times.

“We don’t deserve a media trial. Please let the law take its course.