Shilpa Shetty has taken to social media for the first time since her husband’s arrest. The actress shared a cryptic post.

"I have survived challenges in the past"

The businessman was arrested in a pornography-related case.

Shilpa’s social media post appeared to be a page out of a book by James Thurber.

The actress highlighted a portion of the quote which said:

“The place we need to be is right here, right now.

“Not looking anxiously at what has been or what might be but fully aware of what is.”

It also talked about dealing with challenges, possibly indicating the situation involving her husband.

“I take a deep breath, knowing that I’m lucky to be alive.

“Nothing need distract me from living my life today.”

Raj Kundra was arrested on July 19, 2021, for allegedly producing and distributing pornographic films through mobile apps.

He appeared to be the “key conspirator”, with police saying it had sufficient evidence against Raj. 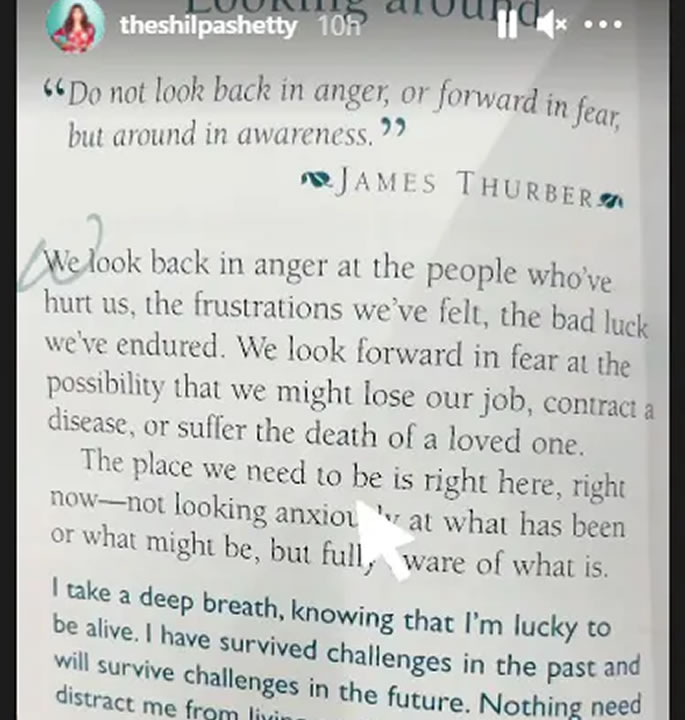 This resulted in further allegations being made against him.

Model and actress Sagarika Shona Suman claimed she was offered a role in a web series produced by Raj Kundra.

However, she alleged that Raj “demanded a nude audition” from her, to which she refused.

She then called for the businessman’s arrest and urged the police to expose the “racket” he was involved in.

Poonam Pandey also weighed in on the matter, saying her “heart goes out to Shilpa Shetty and her kids”.

But she went on to talk about a case she previously filed against him and his associates.

She had a contract with his firm Armsprime Media and it managed her app, which is known for explicit photos and videos of Poonam.

However, after their association ended, Raj’s firm allegedly continued to use Poonam’s content.

When Poonam found out, she filed a case.

But Raj and his associates denied the allegations, adding that they had not received any notice.

Following Raj’s arrest, police have said that Shilpa Shetty will not be summoned for questioning.

Raj’s lawyer has objected to the police case classifying the content as pornography.

A total of 11 people have been arrested in relation to the case, including Raj’s IT head Ryan Thorpe.

Mumbai Police suspect that the money earned from pornography was used for online betting.

They added that transactions between Raj’s bank accounts need to be investigated.

Dhiren is a journalism graduate with a passion for gaming, watching films and sports. He also enjoys cooking from time to time. His motto is to “Live life one day at a time.”
Gehana Vasisth slams Poonam Pandey amid Raj Kundra Scandal
Shannon Singh criticises Love Island 2021 Boys