Amir Khan has once again been hit with allegations of cheating on his wife Faryal Makhdoom. A glamour model claims they had a passionate encounter, calling his “family man” status into question.

"The minute we were alone in the lift, he pulled me against him and his hands were everywhere."

Since his appearance on I’m A Celebrity, Amir Khan has spoken in great detail how he has changed. However, he and Faryal Makhdoom are once again rocked by cheating allegations.

Two models have come forward, each detailing how Amir allegedly cheated or attempted to cheat on his newly-reunited wife.

Both the allegations come after the couple’s appearance on Good Morning Britain (GMB), aired live on 8th January 2018. During the interview, Amir revealed to hosts Piers Morgan and Susanna Reid:

“I went on I’m A Celeb because I wanted people to see what a family man I am.” Even Faryal admitted he appeared a “changed man”.

However, one glamour model claims Amir cheated on his wife with her in a London hotel. While another says he sent a series of texts, hoping to arrange a date with her.

With these allegations in mind, we explore the new scandal rocking Amir and Faryal’s marriage.

The incident at the hotel reportedly took place on 8th January 2018, the same day as the couple’s interview. In fact, reports say Amir set up the encounter with the model, named Sandy Hunter, only an hour afterwards.

Sandy told The Sun that he allegedly messaged her to meet up at London’s Docklands hotel after the interview. The two reportedly met in the evening, having cocktails first before going to his hotel room. The model claims:

“It was obvious what Amir wanted from the start. The minute we were alone in the lift, he pulled me against him and his hands were everywhere.

“When we were in the hotel room he asked me if my bum was real and then gave it a slap before pushing me up against a wardrobe hard and trying to kiss me.”

The 32-year-old also added: “He told me I had an amazing body and was exactly his type — ‘a bit of him’. Then he tried to kiss me again and I let him that time.” They left the room and Sandy claims Faryal attempted to phone him but he ignored her call. 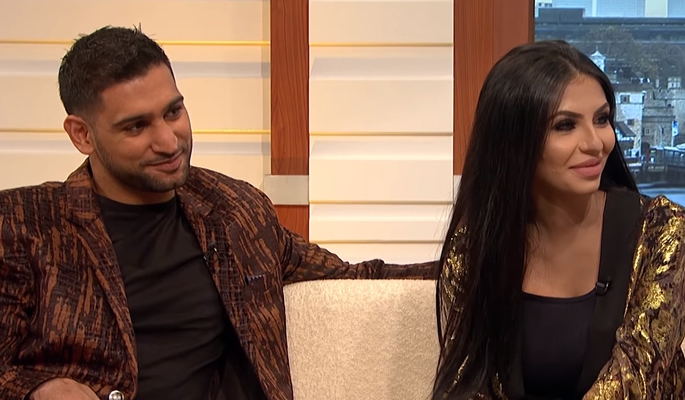 After this alleged meeting, Sandy said Amir repeatedly texted her, attempting to meet up again with her. She further claims he wanted to meet for sex: “He wouldn’t take no for an answer. He told me he was going back to Bolton and he clearly wanted to hook up before then.”

Referring to his comments that he has changed after I’m A Celebrity, Sandy told The Sun:

“He makes a big deal about being a family man, but he wasn’t behaving like one at all. There could have been something seriously wrong at home, but he didn’t seem bothered.”

Meanwhile, another model called Emma Bond has brought Amir’s declaration of being a “changed man” into question. She told The Mirror that Amir allegedly attempted to hook up with her in a long series of texts.

They reportedly exchanged numbers in August 2017 through Instagram and messaged each other. At the time, he was separated from Faryal.

However, Emma claims he resumed his communication with her on 17th December, after he appeared in the Jungle. She said: “I was surprised, ­suspicious, hesitant. I thought: ‘Does he want to confront me?’

“I took a couple of minutes to gather my thoughts then replied, but I didn’t hear anything else for a few more days.”

They allegedly sent text messages to each other, in which Emma claims he attempted to set up a date with her. She also claims he complained about Faryal and called her a “gold digger”. The model added:

“Amir’s been saying he’s changed his ways but I don’t think he’s got any intention of changing. He’s a married man with a young child and a pregnant wife. I’m disgusted at his attitude. He seems so blasé about it.”

After these allegations, some have speculated whether Amir could actually have been set up. Eagle-eyed readers have discussed the images of Amir sitting together with Sandy, which The Sun sources as from one of their photographers.

Some have wondered how was it likely that a photographer from the news outlet happened to sit nearby them. Leading to the possibility that it was a set-up.

However, regardless of this, Sandy’s claims suggest that he may have cheated again on Faryal. In addition to Emma’s allegations, it questions Amir’s ‘changed man’ status. 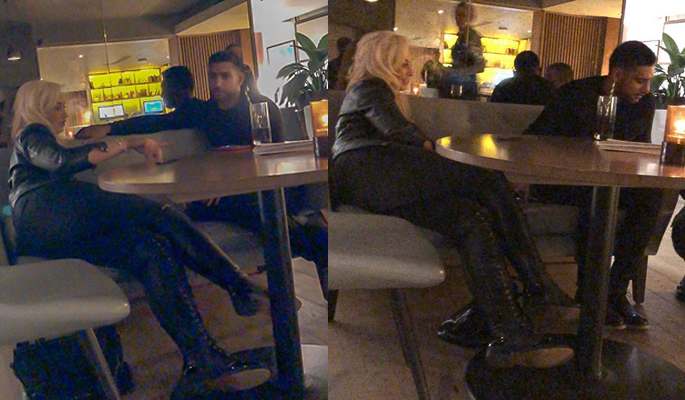 For many, it will come as a big surprise, especially with his recent interviews on GMB and Loose Women. Even after leaving the Jungle he said:

“In a weird way being away from [my family] has made me feel closer to them. I definitely have more appreciation for my little girl and my wife Faryal, because I wasn’t around them.”

As these new allegations contradict his comments, this could impact his public image. With his reunion with Faryal and a return to the boxing ring, the year ahead has looked positive for him. In addition, his time in the Jungle made him popular amongst fans.

But now these cheating claims could cause negative consequences. Especially as Amir and Faryal seem set to move forward, especially with a second child on the way. Could this even spell trouble for their marriage?

Currently, Faryal and Amir haven’t commented on the reports. In fact, the sportsman seems more concerned with his boxing return, showing his training regimes on Snapchat.

It seems then, these allegations will still be speculation. But many will likely keep a close eye on the couple and whether Amir’s declaration of being a “family man” does hold truth.