On her reality show, Faryal Makhdoom revealed how cruel trolls broke her down and taunted her over her husband Amir Khan’s cheating scandals.

"It obviously does upset me."

Faryal Makhdoom broke down in tears while in therapy as she revealed how online trolls taunt her over her husband Amir Khan’s cheating allegations.

She explained that she is “hurt” by “jealous” fans who attack her family online.

On her reality show Meet The Khans: Big in Bolton, Faryal spoke to psychologist Emma Kenny.

She revealed: “Someone posted saying, ‘oh you’re on your high horse you look so happy. Don’t forget about the time your husband was constantly in the papers and there were cheating allegations and your marriage was on the rocks’.

“That’s so harsh, it was so much in one paragraph.

“It obviously does upset me.”

Faryal broke down in tears as she spoke about the online abuse.

She continued: “I do have a thick skin and put up with a lot of abuse online.

“But putting up with things that are said about my husband, my family, my relationship, my children, is something that kind of hurts.

“You look at celebrities and you think ‘oh she’s got everything, she’s got a famous husband, children, money…’

“There is that jealousy and envy which comes with it.

“But I’ve been through so much s*** you have no reason to be jealous.”

“You have to be a really bad person to be miserable and mean towards someone to put that person down. It shows your character.”

After getting her thoughts off her chest, Faryal stated:

“I feel a lot better now, letting it all out.” 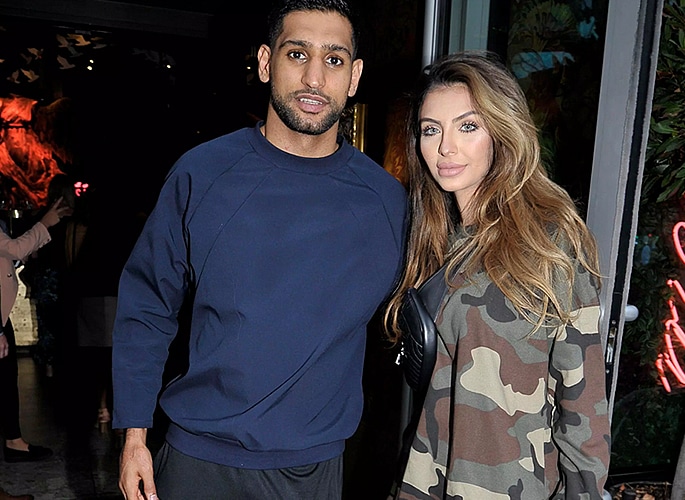 Amir and Faryal got married at New York’s Waldorf Astoria hotel in 2013 and they later moved to Bolton.

However, throughout their marriage, there have been numerous allegations of cheating.

It was alleged that he cheated on Faryal with beautician Sophia Hammani just days after she gave birth to their second child.

She believed Amir was divorced at the time and only saw that he was married when he shared a family photo.

However, the boxer dismissed the claims, saying she was a fan who got angry when he would not pose for a photo.

He was also accused of having an affair with French lingerie model Eglantine-Flore Aguilar.

The couple briefly split in 2017 and during that time, Amir falsely accused his wife of having an affair with heavyweight boxer Anthony Joshua.

During their split, Faryal Makhdoom suffered from postnatal depression which was made worse by the affair allegations.

On Meet The Khans: Big in Bolton, Amir Khan and Faryal Makhdoom talk candidly about rebuilding their relationship.

Amir insisted that his cheating days are behind him after taking his wife to “hell and back”.

Faryal said she took back the boxer for the sake of their family.

Dhiren is a journalism graduate with a passion for gaming, watching films and sports. He also enjoys cooking from time to time. His motto is to “Live life one day at a time.”
Child Rapist who Fled to Pakistan is Jailed
Pakistan added to UK’s Red List of Travel Ban countries