"We have tried something new with this single, hope my fans like it.”

With his signature hairstyle and charm, Guru Randhawa is one of the more recognisable stars of the Indian music industry. He is the most viewed Indian artist on YouTube and his latest song, ‘Tere Te’ is no exception.

‘Tere Te’ follows the immense success of his other recent single, ‘Downtown’. The latter features the model and actress, Delbar Arya, but for ‘Tere Te’, the Indian rapper IKKA lends his talents.

Nevertheless, the musical sensation earns his title of being one of the most viewed Indian artists by constantly pushing the quality of his videos.

“We shot this song in a Mumbai studio with special VFX for the first time.”

DESIblitz takes a closer look at the multiple talents involved in making such a catchy track and impactful visuals.

From its opening notes, ‘Tere Te’ quickly catches the listener’s attention with bouncy beats. Of course, no one can fail to recognise Guru Randhawa’s voice providing Punjabi lyrics over the top.

Most importantly, however, the fricative sound of ‘Tere Te’ creates a beat all of its own, which glues itself in the memory.

Still, while Randhawa is composer and writer of the song, producer Vee cleverly layers the music to avoid monotony.

Instead of including the same repetitive beat that many dance tracks are guilty of, he overlays more swirling sounds at increasingly higher pitches.

This makes up for the absence of a more feminine vocal. Rather, his quest for balance compliments IKKA’s deeper voice and masculine-sounding rap.

Ultimately, the sheer level of fun in the song ensures that it creates the perfect vibe for dancing all your troubles away.

“Ikka paaji has done a great job with rap verses too. We have tried something new with this single, hope my fans like it.”

This touch of the new to classic Guru Randhawa combines to please fans with the perfect New Year anthem.

As mentioned, Randhawa and director, DirectorGift, pay special attention to the visuals of the music video. Opening on the less harsh contrast of dark grey and blue-ish white, there is a sense of elegance and luxury with Guru Randhawa stylishly suited and booted.

This transitions into more casual looks that would provoke envy in many street style aficionados. Still, the striking lapis lazuli of Randhawa’s sweatshirt and pants marries comfort with riches.

Close-ups demonstrate Guru Randhawa’s smoothest moves. Although when he lets IKKA take the lead, he continues to deliver plenty of swag.

A small critique, however, is the presence of six female backup dancers alongside Zaara Y. The video has a futuristic feel alongside Randhawa’s more casual outfits.

Seeing Indian rapper Ikka play the scientist is entertaining. Whereas the inclusion of poles in another scene confuses the narrative. Then the dancers obscure the chance to build the relationship between Guru Randhawa and Zaara Y.

Indeed, Zaara Y, or Zaara Yesmin, sports some interesting looks. From a fun take on the white shirt with black trousers to stunning traditional dress, she has plenty of charisma.

A Boost To His Success

Punjabi cinema is also grateful to the singer for finding a moment to contribute ‘Aaja Ni Aaja’ for the film, Mar Gaye Oye Loko.

The release of ‘Tere Te’ is simply the best way to finish off a great year, earning over 26 million views on YouTube.

Music-lovers have had an extremely positive reaction to ‘Tere Te’, with some of his 224 thousand Twitter followers “loving” the new single.

Many have filmed themselves lip-syncing to the song or have “repeat mode on” – unsurprising considering the catchy desi lyrics.

Some additionally share their praise for the “classy” video and Randhawa’s dancing.

“@GuruOfficial TERE TE crosses 19 million views. Damn happy…  Thanks to @TSeries and @directorgifty for gifting us with such an amazing song. Mind blowing singing and dance by @GuruOfficial GURU RANDHAWA sir”.

@GuruOfficial TERE TE crosses 19 million views. Damn happy… Thanks to @TSeries and @directorgifty for gifting us with such an amazing song. Mind blowing singing and dance by @GuruOfficial GURU RANDHAWA sir ?????? pic.twitter.com/H7dWoY1AVk

“Sir, I am #very_happy by hearing your new song #Tere_Te….It’s an outstanding song. Sir I am your great fan sir and also want to become a #super_singer like you in #BOLLYWOOD..by your #best_wishes @GuruOfficial”.

Sir, I am #very_happy by hearing your new song #Tere_Te….It's an outstanding song. Sir I am your great fan sir and also want to become a #super_singer like you in #BOLLYWOOD..by your #best_wishes@GuruOfficial pic.twitter.com/ojl24c7gQA

Indeed, despite his immense success, Guru Randhawa demonstrates the importance of staying down-to-earth.

He remains connected with fans, retweeting their comments. But upon the song’s release, he thanks the chairman of T-Series, later adding:

“Today we celebrated Bhushan sir’s birthday and release of Tere Te together. I’m thankful to Bhushan Kumar Sir for his support and always believing in me and my music”.

Another Win For T-Series

“Guru is unstoppable. In Tere Te, he once again proves that when it comes to high energy, youthful, melodies no one can beat him. His fans are going to love Tere Te.”

But for T-Series, representing the most viewed Indian artist on YouTube is particularly useful.

YouTuber PewDiePie, real name Felix Kjellberg, is battling to retain his top spot as the YouTuber with the most subscribers. The T-Series YouTube channel began uploading music videos and film trailers in 2010 and is now catching up.

PewDiePie posts video game commentaries and vlogs and is keeping a narrow lead, especially with the support of fans and other YouTubers.

Nevertheless, the vlogger has become increasingly controversial and also works alone. In contrast, T-Series is a music record label and film production company with a huge Indian audience.

Their roster of talented artists is a massive asset in this online competition. For T-Series, Guru Randhawa is almost the jewel in its crown thanks to his immense popularity.

Born in Gurdaspur, Punjab, Guru Randhawa began singing at the age of seven and has come a long way since. Bollywood films are increasingly featuring Punjabi songs and the singer-songwriter has capitalised on this.

He’s enjoyed chart-topping songs such as ‘Suit Suit’, ‘Lahore’, ‘High Rated Gabru’, ‘Made In India’ and many more.

Even T-Series was certain that ‘Tere Te’ would be a hit before its release. But Randhawa’s bankability does have some more altruistic advantages.

Zaara Yesmin is a model and actress. The stunning beauty has already worked with renowned singers like Darshan Raval and Falak Shabir.

However, as a relative newcomer to the industry, appearing in ‘Tere Te’ was a huge opportunity. Yesmin comments:

“Guru Randhawa is a great singer. In this song, he is shaking his legs like a pro to Melvin Louis’ choreography. My experience of working with the entire team was quite amazing.”

“They are very co-operative and they motivate new talent like me to give their best. I feel featuring in ‘Tere Te’ was a great opportunity for me to work with the T-Series team. I hope that audience will appreciate the song once it releases.”

She also hopes that ‘Tere Te’ will become a “New Year anthem for all party people”.

With such fans both in the industry and out of it, it’s likely that this wish will come true and ‘Tere Te’ will accompany Guru Randhawa into another successful year.

Watch the Full Video of ‘Tere Te’ below: 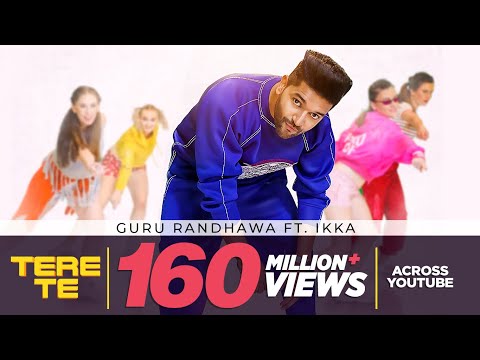