Amir Khan has revealed his embarrassment of the public break-up to Faryal Makhdoom, who he’s since reunited with and explained how they are moving forward.

"If you look at the whole situation, it was all just silly, starting with the texts."

After an ugly, online spat, Amir Khan recently reunited with his wife, Faryal Makhdoom. Now he’s admitted to feeling “embarrassed” about the incident and regrets the public split.

He made his comments to The Mirror, prior to appearing on I’m A Celebrity … Get Me Out Of Here.

The boxer also expressed his goals of getting his life back on track, looking at the reality show as a “detox” for him. Focusing on the break-up, he said:

“And then when we sat down and thought ‘Look, we’ve got a family’. Also she’s expecting so we have to think for the kids. In life you have to forgive. We have to move forward and move on from things like that.”

Back in August 2017, he publicly announced their separation on Twitter. With accusations directed towards Anthony Joshua, it resulted in a flurry of internet memes and reports claiming Amir later apologised to Anthony.

The boxer also added: “That’s part of life. You always make mistakes and it’s about coming through them and not making them mistakes again.

“I made a few silly mistakes. I did put my life on social media, I assumed things which were wrong. So I kind of embarrassed myself.” 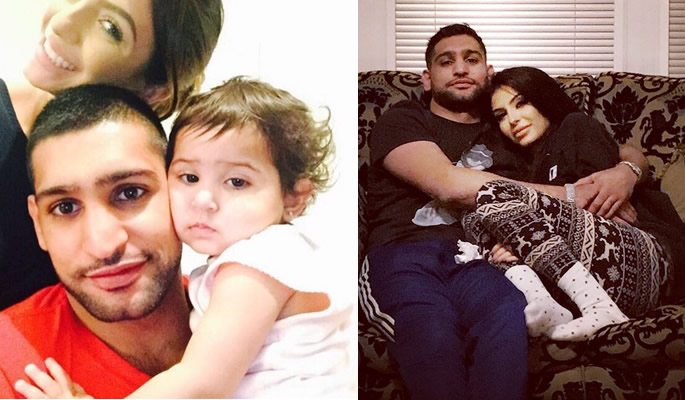 Throughout the couple’s marriage, they have faced several controversies, such as his parent disowning him due to Faryal. But now, Amir suggested that the whole family have reconciled, saying:

“I had a lot of falling-outs with my family and Faryal and now we get on so good and we’ve all put everything behind us.

“It’s all a big wake-up call for us all and we’re all one big family again. The day before I left for Australia we were all at my mum’s house. Me and Faryal slept in our spare room.”

The couple’s split turned into a series of developments, from Faryal’s pregnancy to Amir on a reported date with Bella Gusamo. In addition, a teacher claimed that Amir had blamed their intended split on Faryal’s ‘obsession’ with cosmetic procedures.

The teacher, named Sophie, claimed: “He said she was good-looking until she started following Kylie Jenner and changing her looks. He said she had no need for the work.”

With the two now reunited, Amir looks ahead to I’m A Celebrity … Get Me Out Of Here. He said of his appearance:

“I’m still a boxer, I’m training but there’s no fights on. So I thought, ‘I’ve got time to do this show, so why not?’ I’m only going to be away from training and home a few weeks. I’ll use it as a detox at the same time.”

He also added that Faryal, whilst shocked at first, also agreed “it was a good idea for me to get away and spend some time with myself and focus again”.

With the new series back on, many will keep a close watch on the boxer. Not only for his Bushtucker Trials, but whether he reveals more about his marriage.

Make sure you tune into I’m A Celebrity … Get Me Out Of Here on ITV daily at 9pm.