Sonam Kapoor proves she can glitter in gold at Cannes 2017! Wearing yet another jaw-dropping outfit, the starlet shone above the rest.

We’ve witnessed Day One of Sonam Kapoor’s glamorous attendance of Cannes 2017. Now she has stunned fans again with another gorgeous gown.

Embellished with shimmering designs, it created volume while still highlighting her wonderful silhouette. With a gold belt fastened around her waist, she showcased her beautiful figure.

Sonam also kept her makeup to a similar colour scheme. With immaculate contouring, she glowed under the French sun. Her gold eyeshadow with black eyeliner also highlighted her beautiful brown eyes.

Favouring a nude lipstick, the actress made sure everyone focused solely on the dress.

Doesn’t she look strikingly similar to Aishwarya Rai Bachchan? With both now appearing in romantic ball gowns, it seems the fairytale fantasy is now in trend.

While L’Oreal Paris were proud to showcase their ambassador, Sonam’s sister also couldn’t wait to reveal the gown to her Instagram fans.

Rhea Kapoor posted behind-the-scenes images of the actress posing for a photo shoot:

22nd May 2017 has marked a busy fashion day for Sonam Kapoor. Before dazzling everyone in gold, she created iconic day looks, each oozing with style and sophistication. First wearing an outfit containing hues of red and gold, the actress created stunning vibes with this look.

Next, she appeared in an ice-blue saree. Once again showing the fashionable styles of Indian attire, Sonam completed the look with chandelier earrings and a white clutch bag. 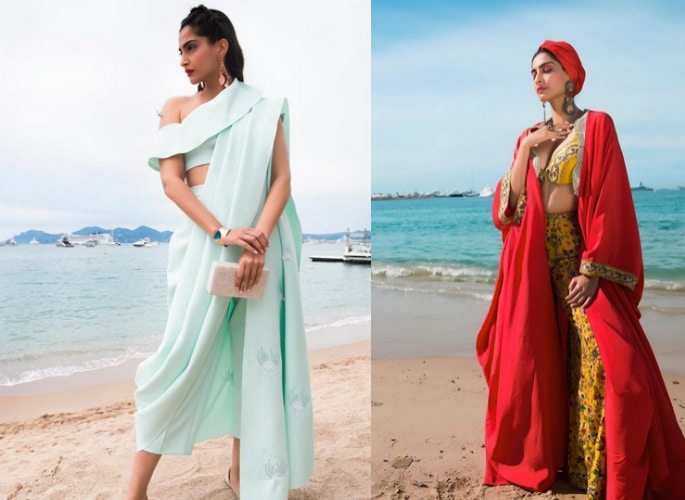 And now with this final red carpet look, Sonam has shown why can out-do even Hollywood stars.

With sophisticated fashion sense, the actress has created a memorable outfit which has left us stunned.

From Deepika’s ‘Ethereal Enchantress’ look to Aishwarya creating the perfect fairytale fantasy, we can’t wait to see what the stars will bring out for Cannes 2018!