Aishwarya Rai Bachchan hits Cannes 2017 with the ultimate fairytale fantasy. Attending the film festival, she showed that she can still slay the red carpet.

“Queen of Cannes” Aishwarya Rai Bachchan impresses fans with her first red carpet look for Cannes 2017. Creating the perfect fairytale fantasy, the star has proven once again she can shine above the rest!

After starlet Deepika Padukone wowed fans with her red carpet looks from the 17th and 18th May 2017, it now marks Aishwarya’s turn. And for her 16th (yes, 16th!) appearance, she didn’t disappoint.

The L’Oreal Paris ambassador stunned fans as she wore a glamorous baby blue gown. Covered with shimmering embellishments, the actress created a vision of beauty and style. The low-neck dress complimented the star’s figure flawlessly.

It also captures the style of romantic ball gowns, as it casts a striking similarity to dresses commonly seen in fairytales. Aishwarya has thus created the ideal fairytale fantasy with this look. With very simple jewellery and sleek, straight hair, the whole emphasis belonged to the gown.

For makeup, the actress wore a dark eyeshadow and a mauve lipstick. This warm combination complimented the outfit extremely well.

Wouldn’t she make a perfect Disney princess? L’Oreal Paris India would agree as they dubbed her as Cinderella:

Posing in a sea-green outfit, the dress contained decorations of brightly-coloured flowers. Finished off with stripes of reds, blues, pinks and yellows, it became the ideal summer look.

Next, she changed into a regal outfit, fit for the “Queen of Cannes” herself! Keeping in theme with her previous dress, the gown contained beautifully-designed floral patterns. The combination of a pastel pink gown with warm flowers finished yet another jaw-dropping look.

With both of these outfits, Aishwarya kept her hair in long, wavy locks and wore yellow heels. But perhaps with her second look, did the actress give fans a subtle hint of what to expect on the red carpet? 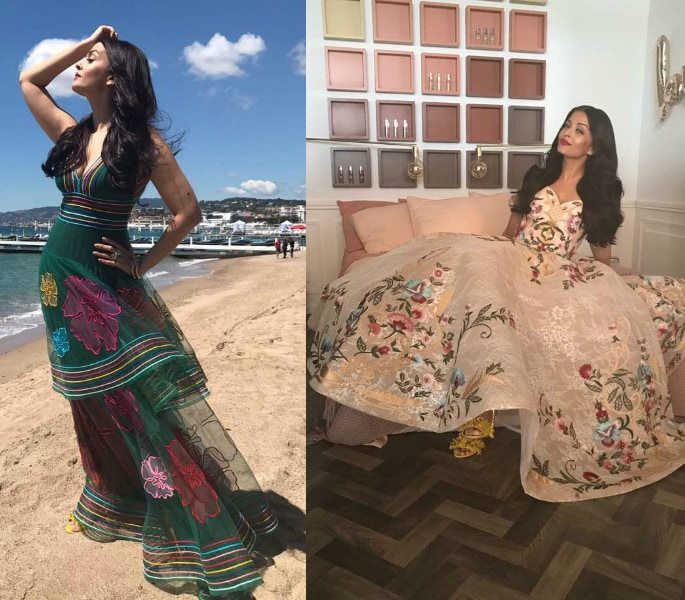 When Aishwarya isn’t wowing us with magnificent looks, she’s enjoying Cannes 2017 with her four-year-old daughter. The star has brought Aaradhya to the film festival, making sure they still have quality mother-and-daughter time.

Arriving at the airport, Aaradhya gave big smiles to the press and appeared excited to visit Cannes 2017. We wonder if she will follow in her mother’s footsteps and eventually become “Queen of Cannes” herself?

With Aishwarya Rai Bachchan’s first red carpet look finally revealed, it appears the star has outdone herself again. For her 16th appearance, she’s shown the world that Bollywood can produce stylish fashion icons.

We can’t wait to see what the fashionista will show off tomorrow!