Aishwarya Rai Bachchan back at the International 66th Cannes Film Festival took the global crowd head on. We take a look at some of her best outfits at the glam event.

Aishwarya has decided to wear a mix of both Eastern and Western attire.

Cannes is one of the best international film festivals around. It draws in the biggest celebrities of Hollywood, Bollywood, and the rest of the world.

One particular celebrity who graces Cannes each year, is India’s sweetheart, the ever beautiful, Aishwarya Rai Bachchan.

Way back in 2002, Aishwarya made her first appearance on the red carpet alongside Shahrukh Khan for their premiere of Sanjay Leela Bhansali’s film Devdas.

For Ash’s debut appearance, she chose to represent her Eastern side and worn a golden Neetu Lulla sari with gold jewellery. One could only be blown away by this women, she looked like a stunning, flawless actress. 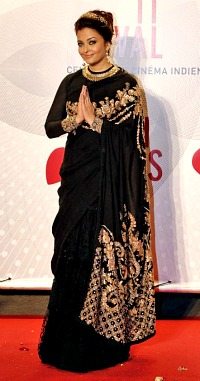 In 2003, things were looking up for Aishwarya as she became the first ever Indian actress to be selected for the jury at the Cannes Film Festival. Unfortunately, we couldn’t say the same about her outfit.

That year she wore a lime green Neetu Lulla sari and had her hair tied up in a bun. This was a huge fashion disaster for the star.

Later on she was criticised again for wearing a hot pink shimmery dress. We can only give this lady the benefit of the doubt, right? She must have been too busy judging and focusing on the films.

A lot of people weren’t very pleased and were shocked by the actress’s boldness. However, in 2005 she came back and was praised by the numerous amount of gowns she chose.

Last year Ash made huge headlines by being seen after her pregnancy and how much weight she had put on.

She was glowing and even though she was plus size, her Elie Saab dress fit her in the right places and showed off her curves. When she arrived she wore an Angelo Katsapis maxidress. 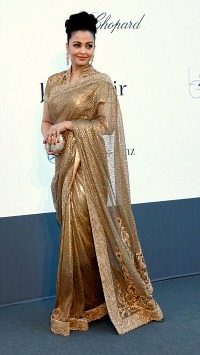 Later on that evening she made a huge faux pas by wearing a cream chikankari Abu Jani-Sandeep Khosla sari for the AMFAR Cinema Against AIDS Gala with an embroidered jacket.

After this huge event she was spotted in a dark blue Roberto Cavalli kaftan, where she looked a million dollars!

This year has been a huge one of Ash, the 66th year of Cannes and 12 years of being on the red carpet. Wow, who wouldn’t want to be in this ladies shoes?

At the 2013 Cannes Film Festival Aishwarya decided to wear a mix of both Eastern and Western attire.

When she walked down the red carpet for AMFAR, she wore a golden sari designed by Tarun Tahiliani, gold accessories were chosen alongside a minimum make up palette with an updo hairstyle.

Everyone was expecting Ash to make an impact and not try to be safe or play it down, not wowed!

At the screening of Behind the Candelabra, Ash wore a teal gown with her hair up and boy did she do the dress justice! 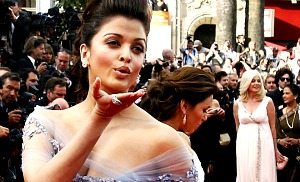 The teal colour stands out against her skin and makes her eyes stand out even more! The pink lipstick looks phenomenal with the whole outfit. Whoever picked this outfit out – we salute you!

When she made her second appearance she wore an Abu Jani and Sandeep Khosla embroidered gown at the Blood Ties screening.

For a 100 years of cinema, Mrs Rai Bachchan wore a Sabyasachi black sari with bits of gold embroidery – simple but elegant.

She was last seen wearing a white shirt and mermaid type skirt. Abhishek tweeted her photo on Twitter saying there she is. His photo looks completely professional and shows Ash’s figure perfectly and how much weight she has lost, she looks fab!

Clearly having Beti B by her side, has certainly done wonders for Ash’s fashion sense. Bringing Aaradhya with her to Cannes, it seems motherhood definitely agrees with Mrs Rai Bachchan:

“It’s splendid… It’s inexplicable.The joy, the bliss, is wonderful. A smile from my daughter and that’s it! She’s good. She’s great.”

Amitabh Bachchan was also at the event in a black shiny tuxedo and white shirt, he was at Cannes due to his cameo in The Great Gatsby, it’s about time Amit ji had a role in Hollywood!

The Bachchan clan are definitely a force to be reckon with. Bol Bol Bol Bol Bol Bachaaaaaan! We can’t wait to see the fine Aishwarya and her husband on the big screen again – Jodi Hai Number 1!

Anisha has lived and breathed Bollywood since she was young! She loves everything Desi and would like to become an actress in the future. Her life motto is " Zindagi nahin milti hai baar baar, toh khul ke jio aur haso - umar beeth jaati hai..."
Spring/Summer Trends 2013 for Men
Pakistani Wedding Fashion