Bollywood’s most fashionable star is without a doubt Sonam Kapoor. The young actress regularly wows her fans with some stunning creative ensembles.

Since debuting at the International Cannes Film Festival in 2011, Sonam’s style sense has truly evolved.

From some questionable ensembles in the early years, her later appearances on the red carpet simply dictate how elegantly chic this diva really is.

Every time Sonam visits Cannes, you can count on her to regularly upstage some of the most glamorous Hollywood stars on the red carpet. 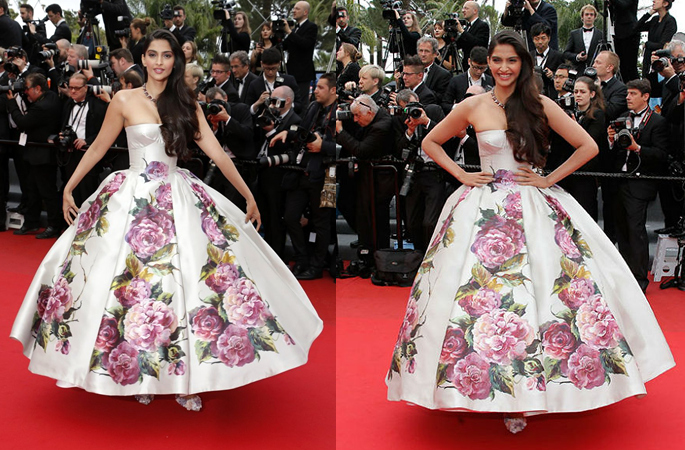 Cannes 2013 saw Sonam Kapoor look like a flower princess in a strapless Dolce and Gabbana printed gown for the premiere of Jeune & Jolie.

The style diva kept her hair naturally wavy and swept to one side, and teamed the rest of her outfit with a matching Sunita Kapoor designed purple necklace and a wide smile. Her heeled pumps were also in the same flower print.

After a few hits and misses in previous years at Cannes, Sonam’s fashion was finally beginning to match her quirky and bubbly personality that we know and adore. 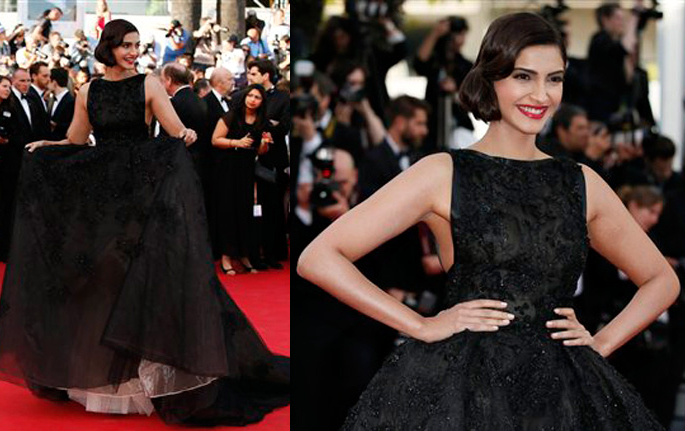 In her first red carpet appearence in 2014, Sonam oozed vintage glamour with a stunning black Elie Saab Couture gown for the premiere of The Homesman.

Voluminous and backless, the gown had a dusty pink underskirt and intricate black embroidery and detailing. 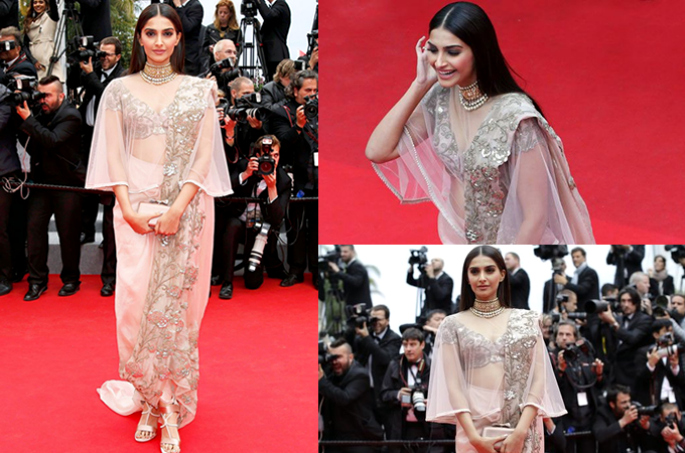 2014 was certainly a good fashion year for Sonam as she upstaged her own black Elie Saab gown with an even more stunning ensemble.

This time Sonam transformed from Hollywood bombshell to a Desi belle, in a traditional look with a modern twist.
Sonam opted for Anamika Kapoor in a salmon pink saree-turned-dress with gold embroidery.

She matched the outfit with a stunning choker designed by her mother Sunita Kapoor, which looked as though it was made specially for the dress.

Sonam also matched her accessories with the stunning sari dress with a gold Ferragamo clutch and Jimmy Choo shoes.

She also kept her hair open and sleek with no earrings. Absolutely beautiful! 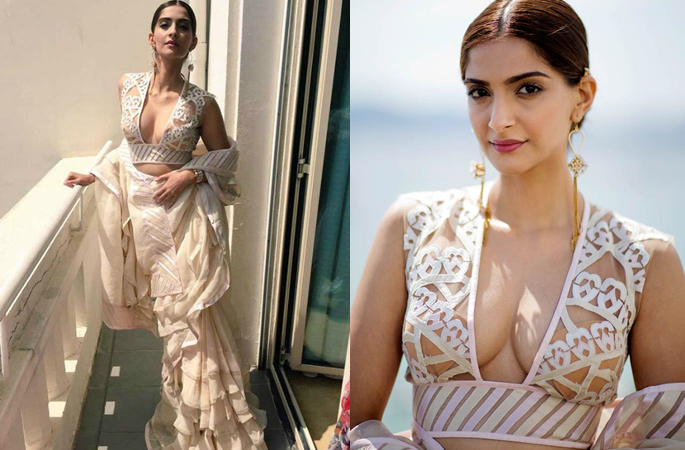 Cannes 2015 saw a more sensually grown-up Sonam in a stunning ruffled sari with an elaborate cut-out blouse that left very little to the imagination.

The neutral hued modern sari was designed by Abu Jani and Sandeep Khosla.

Styled by her sister and bff, Rhea, Sonam matched the daring outfit with hanging Suhani Pittie earrings and a Bvlgari watch.

Her hair was minimal and slicked back into an elegant bun. This was certainly a Sonam appearance that the Cannes crowd will struggle to forget. 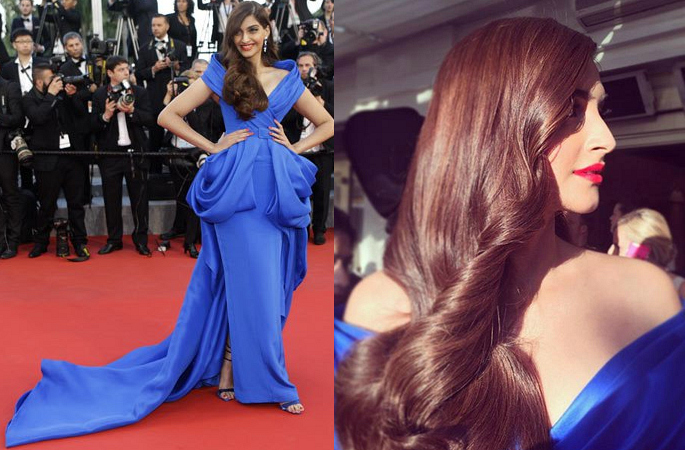 One of Sonam’s most recent appearances on the Cannes red carpet saw her dazzle in a bow inspired electric gown from British fashion house, Ralph & Russo for the premiere of The Sea of Trees.

The powerful blue gown was a perfect statement piece for the loud and larger than life Sonam, and she wore matching Giuseppe Zanotti sandals.

The high drama outfit was teamed with her trademark Chopard earrings and red lips and nails.

Her hair was voluminous, side-swept and in glossy Hollywood waves, showcasing a versatile Sonam Kapoor who can pull off almost any fashion look with grace and perfection.

With so many red carpet fashion hits at Cannes, Sonam Kapoor truly reigns as a style queen. What will her next red carpet appearence at the International Cannes Film Festival bring, we wonder?