Sonam sure has mastered how to put on a show-stopping appearance.

Sonam Kapoor made her second red carpet appearance at the International Cannes Film Festival on May 18th, 2015.

After captivating us with her stunning Ralph and Russo couture ball gown on May 16, the Bollywood star out-did her diva self, this time rocking a glamorously daring Elie Saab design.

In her fifth year at the event, Sonam sure has mastered how to put on a show-stopping appearance.

Attending the premiere of Inside Out (2015), the actress stopped traffic with a magnificent feathered ball gown. 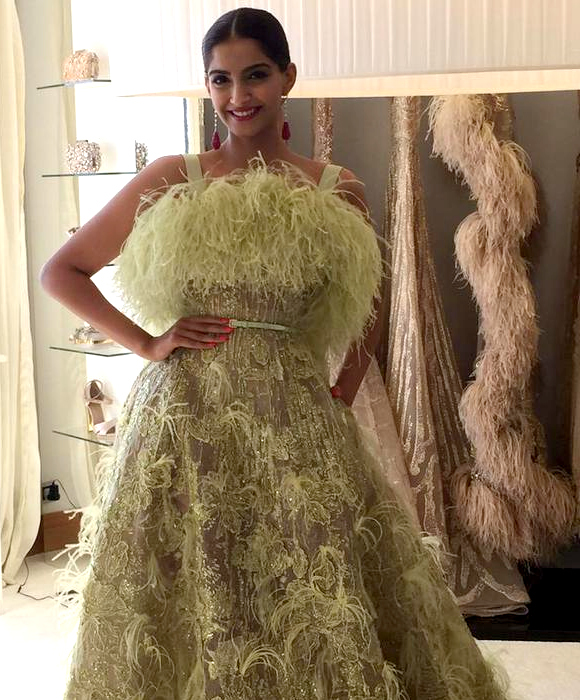 Draped in a sorbet coloured assortment of feathers and beads, the L’Oreal ambassador looked every inch the diva as she posed in her hotel dressing room.

The thick, feathery neckline captured everyone’s attention, whilst the thin belt around her waist accentuated her dainty figure perfectly.

The beaded body of the embellished gown was made even more stunning with the cascade of feathers trailing downwards.

The hem of the dress was gorgeously draped in a soft assortment of feathers, giving her a soft, ethereal look. 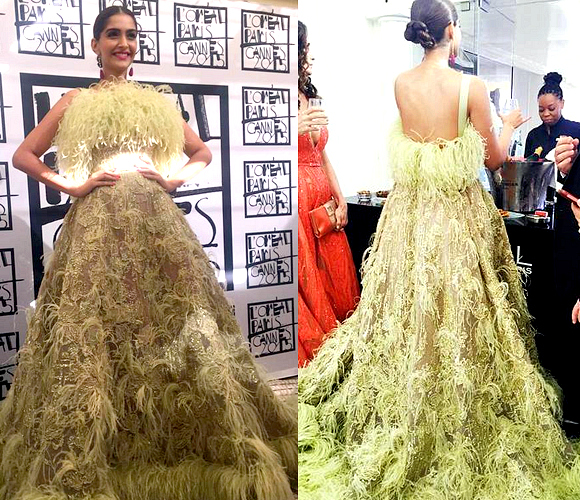 The Bollywood beauty added even more intrigue with her makeup and accessories.

The star opted for sultry, smoky eye makeup and a vibrant pink lip colour in the shade Intense Fuschia to match her Chopard earrings.

Sonam’s sleek hairdo flattered her outfit and complimented the star’s couture gown with its simplicity.

With other Bollywood actresses donning equally stunning outfits, Sonam made sure she upped the fashion stakes with this fearless number.

Earlier in the day, Aishwarya Rai Bachchan stunned fans in a gorgeous Stella McCartney outfit whilst attending press interviews. The star wore a white shirt and printed trousers teamed with a scarlet lip colour to top it off. 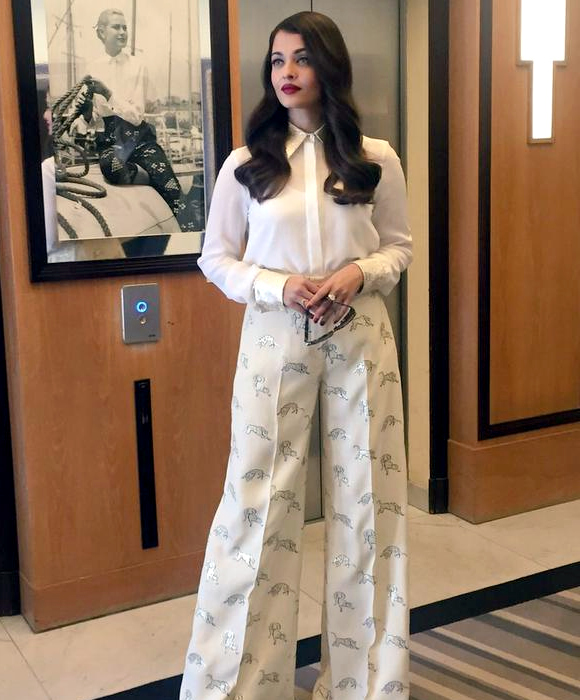 From one Bollywood beauty to another, Katrina Kaif has bid a final farewell to her first visit to Cannes, leaving Aishwarya and Sonam to fly the fashion flag:

Loved sharing this amazing journey to #Cannes2015 with all you lovely people. Until next year! 🙂 @LOrealParisIn pic.twitter.com/1xcu8JPpF4

But with two red carpet outings done and dusted, style expert Sonam and her golden couture gown has us all talking.

Whether you think it’s a fashion hit or miss, this is one red carpet appearance that will stick with us forever!

Danielle is an English & American Literature graduate and fashion enthusiast. If she isn't finding out what's in vogue, it's classic Shakespeare texts. She lives by the motto- "Work hard, so you can shop harder!"
Aishwarya Rai graces Red Carpet at Cannes 2015
Neha Dhupia to host IIFA Fashion Extravaganza 2015