Sara Ali Khan is all praises for her mum Amrita Singh. Expressing her love, Sara declares that she has a ‘woman crush’ on her mother.’

Their relationship is one to be admired.

Sara Ali Khan declares that her mother Amrita Singh is her woman crush, as she shared a heartwarming throwback picture of the two of them.

The actress has been receiving praise for her polite and humble nature. Her father Saif Ali Khan has admitted that he admires Sara’s humility the most.

Sara made her debut in Bollywood with Abhishek Kapoor’s Kedarnath (2018) alongside Sushant Singh Rajput. Despite the mixed reviews regarding the film, Sara Ali Khan’s performance received praise.

Ever since then, she has been winning fans over with her sense of humour and confidence.

Most recently Sara shared a lovely post featuring her mother Amrita Singh. The photo perfectly captures the love between mother and daughter.

In the picture, Sara is seen cuddling Amrita as they both pose for the camera seemingly dressed for an occasion.

Amrita Singh has remained a crucial part of her children Sara and Ibrahim’s lives. Her role in their upbringing highlights how she has taught them well.

In this instance, Sara’s politeness appears to have transcended from her parents, Amrita and Saif.

Even though Saif and Amrita parted ways, Sara and Ibrahim share a close bond with both parents.

They have accepted their stepmother Kareena Kapoor Khan with open arms and attended Saif and Kareena’s wedding. There is no doubt that the Khan family is truly happy.

For the festive season, Diwali, Sara Ali Khan posted a photo with Amrita and Ibrahim.

The lovely picture of the trio received over 2 million likes.

Ibrahim is seen with his arms wrapped around Sara and Amrita as he pulls a funny face. Sara captioned the post on Instagram writing:

“Diwali Hai lots and lots of love, luck and laughter from my two safer, eco-friendlier but equally loud pattakas.” 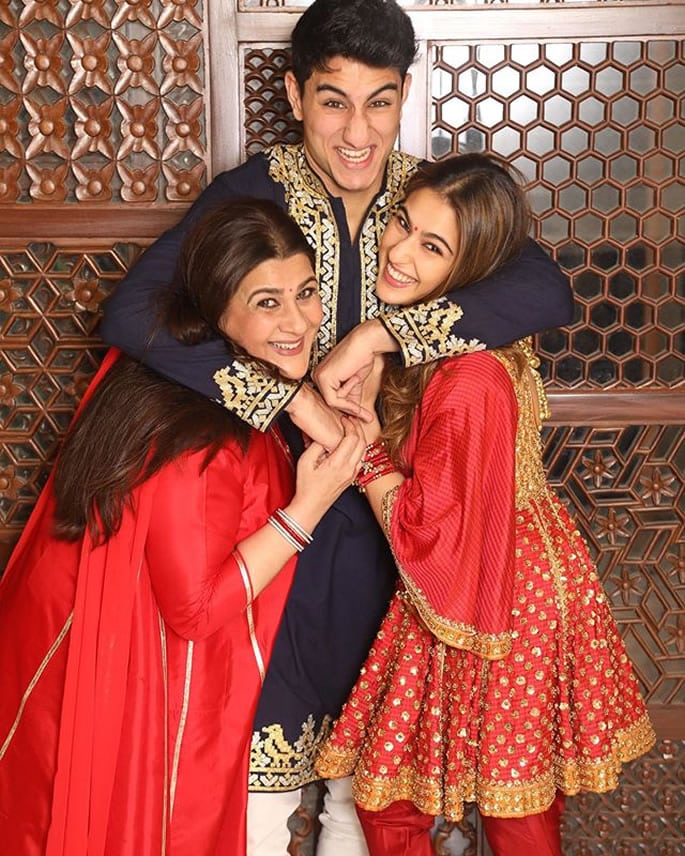 On the professional front, Sara Ali Khan will appear in David Dhawan’s Coolie No.1 (2020) with Varun Dhawan.

This upcoming comedy film will be a remake of the 1995 film with the same name, starring Govinda and Karisma Kapoor.

In addition, Sara will star in Imtiaz Ali’s Aaj Kal alongside Kartik Aaryan. The film has been described as a romantic movie and is due to release on February 14, 2020.

We hope to see Sara Ali Khan continue to impress us with her poise and grace, along with the support of her mother.

Their relationship is one to be admired. It is surely a treat for her fans to see such precious moments.

Ayesha is an English graduate with an aesthetic eye. Her fascination lies in sports, fashion and beauty. Also, she does not shy away from controversial subjects. Her motto is: “no two days are the same, that is what makes life worth living.”
Sonakshi Sinha replies to Social Media Trolls with Video
Hero for Real SRK saves Aishwarya’s Manager from Fire