Sajal Aly has a Crush on Aryan Khan?

Does Sajal Aly have a crush on Aryan Khan? An Instagram Story suggests that she does but not everyone was happy about it.

"It seems like she is desperate for a relationship."

It seems that Sajal Aly has revealed that she has a crush on Aryan Khan.

The picture featured Aryan wearing a white t-shirt and striking a candid pose as the sun begins to set.

But what fans noticed was the red heart emoji.

It led social media users to believe that Sajal was subtly telling her fans that she has a crush on the 24-year-old. 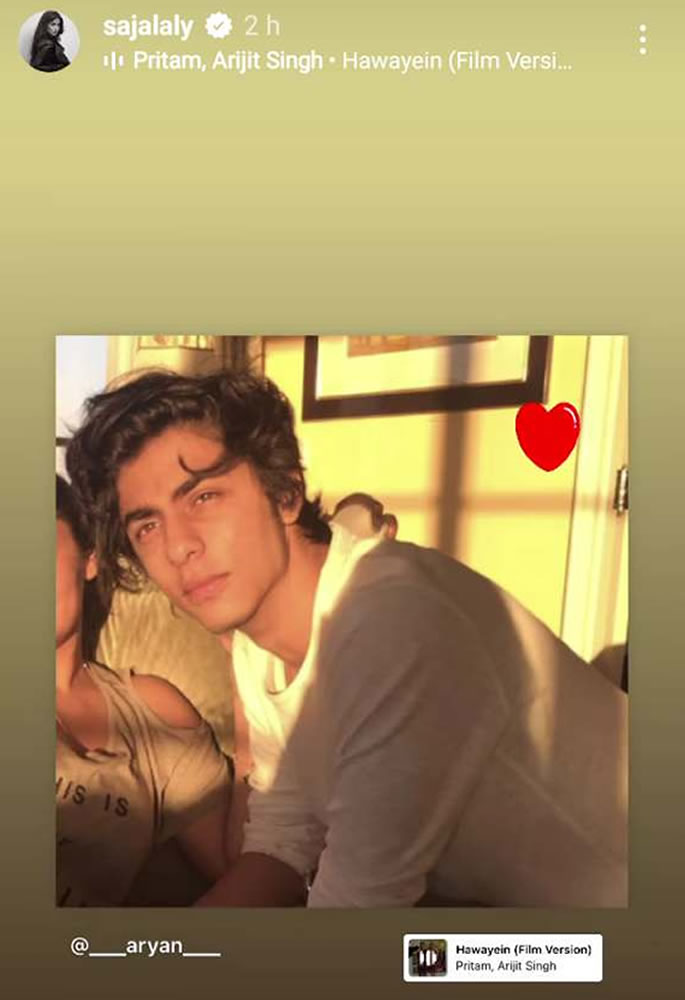 But despite her popularity, many were not happy with Sajal over the matter.

A lot of social media users stated that Sajal is a huge star and should act in an appropriate manner. Many comments claimed that it is mostly Pakistani stars who behave inappropriately.

One person said: “She really likes the ‘only sons’ of superstars.”

Another called her “desperate”, writing:

“It seems like she is desperate for a relationship.”

A third said: “Desperation at its best.”

Some believed it was a ploy by Sajal to get a reaction from her ex-husband Ahad Raza Mir.

While it is not known why they divorce, there has been a lot of speculation, with some claiming infidelity was to blame.

Others were reminded of the incident between Urvashi Rautela and cricketer Naseem Shah.

Actress Urvashi hit the headlines when she posted an edited video of her and Naseem. She was subsequently criticised by netizens, with many pointing out that Urvashi is nine years older than Naseem.

Social media users also criticised Sajal for having a crush on a younger Aryan. However, they incorrectly claimed she was far too old for him when in actual fact, there is a four-year age gap.

“Maybe she is looking for a good quality powder stuff from Aryan.”

On the work front, Sajal Aly recently attended the Toronto International Film Festival for the premiere of What’s Love Got To Do With It?

Sajal thanked her fans for the love they gave her.

In a post, she wrote: “My debut outing at TIFF was an absolute dream and fills my heart with immense gratitude.

“This would not have been possible without Jemima Goldsmith and Shekhar Kapur. I am beyond overwhelmed by the love, appreciation.

“And above all, I am extremely humbled to have had an opportunity to represent Pakistan on the world stage.

“Thank you, Toronto it has been an absolute honour. I hope to see you again soon.

“Special thanks to my family and close friends for always being there for me.”

Dhiren is a journalism graduate with a passion for gaming, watching films and sports. He also enjoys cooking from time to time. His motto is to “Live life one day at a time.”
Ranveer & Deepika to play lead roles in Brahmastra Part Two?
Arjun Kapoor ‘Slides into People’s DMs’?