Ranu Mondal has become a singing sensation. In just a few days, she has gone from singing in railway stations to recording Bollywood songs.

"it was Lata Mangeshkar who inspired me a lot."

Ranu Mondal has gone from being a railway singer to performing Bollywood songs after a video of her went viral.

The woman, who is in her 50s, struggled to earn money for food and made a living by begging and singing at Ranaghat railway station in Kolkata.

While Ranu was known by the locals for her singing talents, she became an overnight sensation after she was filmed singing and the video went viral.

Passenger Atindra Chakraborty first heard Ranu singing a Mohammed Rafi song. He then asked her to sing another song.

Ranu then sang one of Lata Mangeshkar’s chart-toppers.

Atindra said: “I was hanging out with my friends at a tea stall on platform number six. A Rafi song was playing on the radio aloud.

“Suddenly I heard the lady humming to the tune as she sat on the platform floor. I asked her if she could sing something for us.

“She sang a song and I recorded it on my mobile. We were surprised by how melodious she was.”

Atindra and his friends spent some time with Ranu as she sang various old songs. Meanwhile, he had bought some food and water for her.

He later posted the video online and it immediately went viral. People dubbed Ranu as ‘Lata of Ranaghat’.

The video has had almost 5 million views and many people sought to help her by getting food for her and even giving her a makeover at a beauty parlour. 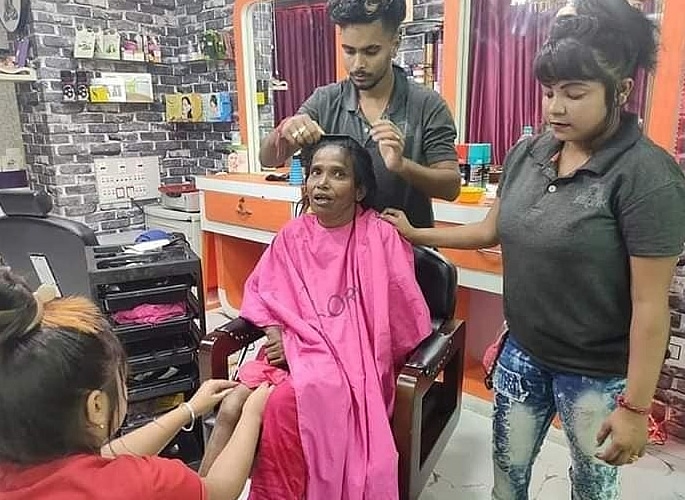 Ranu explained: “From my childhood, I had a passion for listening to music and singing along. Although I liked Mohammad Rafi and Mukeshji’s songs, it was Lata Mangeshkar who inspired me a lot.

“I could relate to her singing and the melody always touched my heart.”

The video even caught the attention of Himesh Reshammiya, who was impressed by her voice.

TV singing reality show Superstar Singer welcomed Ranu on one of its episodes. Himesh, who is a judge on the show, promised to work on a song with her. 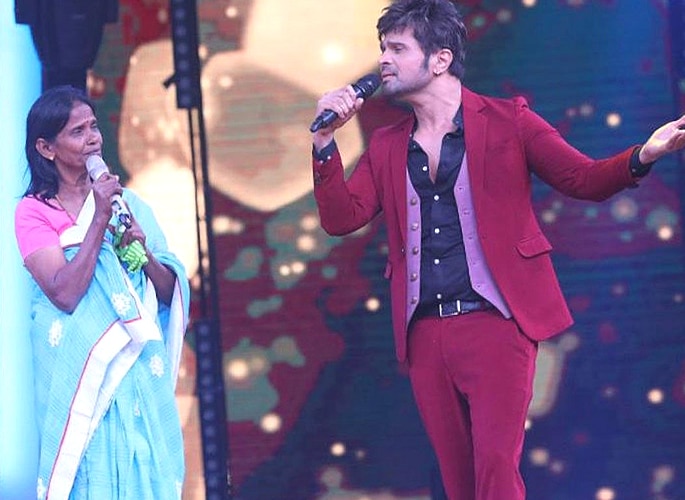 The multi-talented singer stuck to his promise and he has recorded a song with Ranu Mondal for his upcoming film Happy Hardy and Heer.

Himesh shared the collaboration on his Instagram which shows a glimpse of the singer directing Ranu as she records the song.

He also revealed that the song will be called ‘Teri Meri Kahani’.

Himesh wrote: “Recorded Teri Meri Kahani, my new song from Happy Hardy and Heer with the very talented Ranu Mondal who has a divine voice, all your dreams can come true if we have the courage to pursue them, a positive attitude can really make dreams come true, thanks for all your love and support.”

Many praised Himesh for keeping his promise and giving Ranu her big break.

One wrote: “Himesh sir, you are a great man… continuing sir.”

Another commented: “Himesh Reshammiya, more and more respect and salute to you.”

Recorded teri meri kahani my new song from happy hardy and heer with the very talented ranu mondal who has a divine voice , all your our dreams can come true if we have the courage to peruse them , a positive attitude can really make dreams come true , thanks for all your love and support

On focusing his efforts on talents like Ranu, Himesh said:

“Salim Bhai’s father Salim Uncle once advised me that if I ever meet a talented person in life, never let him go away and keep him close to me.

“He advised me to help the person in carrying out his talent. Today I met Ranu ji and I realised that she has got a divine power.

“Her songs captivated me and I could not stop myself from offering her the best I could.”

“She has received a gift from God, which needs to be brought to the world and I think singing this song in my next film Happy Hardy and Heer will help her voice reach everyone.

“She also learned the tune on the live set and quickly recorded the track in a single day and the title of this song is Teri Meri Kahani.”

While Ranu is happy with her newfound success, it has also seen her reunited with her daughter after 10 years apart. Her daughter Sati Roy has a son and runs a grocery shop. 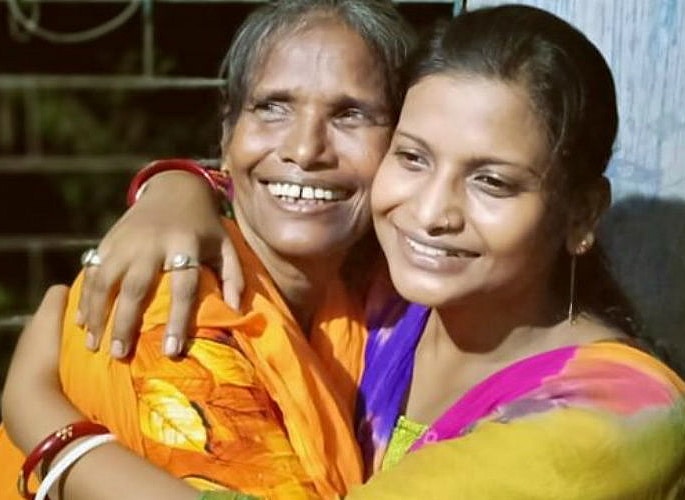 Atindra commented on their reunion. He said: “Today I am really happy, only God knows why I am happy, money is not a big deal in life.

“Ranu is getting her daughter back today due to a video of mine.”

Happy Hardy and Heer stars Himesh alongside Sonia Mann. The romantic comedy is set to release on September 20, 2019.

From singing outside a railway station to performing Bollywood songs, it has been a fast rise to stardom for Ranu Mondal and it is all thanks to one viral video.

When the film releases, audiences will get to her voice alongside Himesh’s and this will hopefully result in more opportunities to perform future Bollywood songs.

Dhiren is a journalism graduate with a passion for gaming, watching films and sports. He also enjoys cooking from time to time. His motto is to “Live life one day at a time.”
Premz talks Indian Summer, Music, Lyricism & Rap Scene
10 Best Parmish Verma Songs You Have to Listen To