Pooja Misrra has responded to a viral video that sees her slapping a hotel staff member in Delhi on Facebook. DESIblitz has all the details.

"A staff member even called me and made a life threat."

Uploaded onto Facebook, the video sees Pooja get aggressive with staff as she checks out of her hotel in India.

On staff member tries to record the incident with Pooja on his mobile phone. In anger, she retaliates by banging the phone onto the floor.

She is also seen hitting and slapping the staff member several times.

Pooja has since responded to the video that has gained over 30,000 views, on her own Facebook page.

The model and reality show star also posted her response to DESIblitz.com, writing:

“There has been a video uploaded by insecure jealous rivals of me alone defending myself against unprofessional, assaulting hotel staff of publicity hungry Taj Vivanta’s new property in dwarka.

“Well the truth is I am busy with my ventures as a producer and really don’t have time for this bullshit. However my rivals insist on me giving them attention so here goes!”

Pooja mentions that in the video she is defending herself against ‘unprofessional, assaulting hotel staff’ at the ‘publicity hungry’ Vivanta by Taj Dwarka hotel in New Delhi. 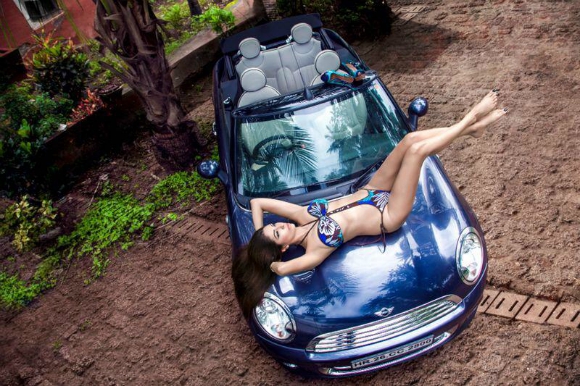 Pooja writes that she was ‘tortured’ by the hotel and deliberately abused and aggravated by staff:

“Whilst my stay i was tortured by the hotel,with the lights being switched off in my room when media had come to interview me.

“I was given 500 missed calls in a day on the intercom which when i picked up were hung up on just to irritate me. A staff member even called me and made a life threat.”

Pooja goes on to write that she decided to check out of the hotel the following morning. After paying her fee in full, she was told of a prior booking fee that had still yet to be cleared.

This was when she had been invited to Delhi by Mr. Navraj Hans for a celebrity appearance. At the time, the Hans’ company had booked her into the Taj Dwarka and covered all the expenses. Pooja writes:

“… the hotel got greedy and started demanding money for the debts not payed by nav raj hans company ions ago! Excuse me!I didn’t make that booking and i most definitely am not liable for dues not payed by them.” 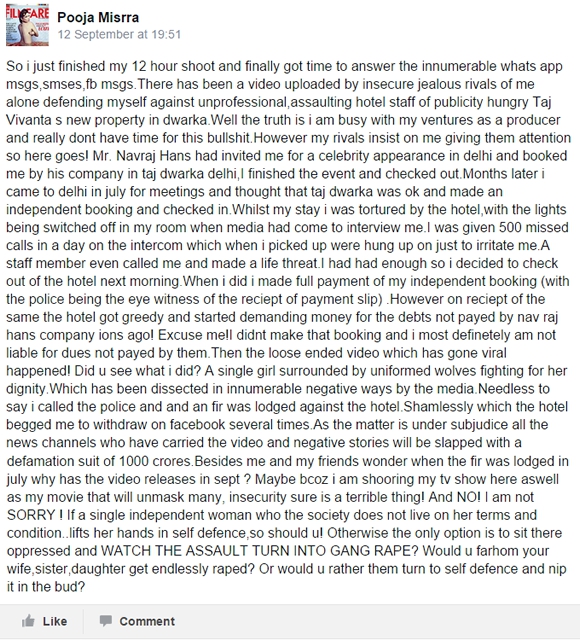 It is at this point where the incident in the video took place. Pooja writes:

“Did u see what i did? A single girl surrounded by uniformed wolves fighting for her dignity.Which has been dissected in innumerable negative ways by the media.”

Pooja adds that she lodged an FIR against the hotel. 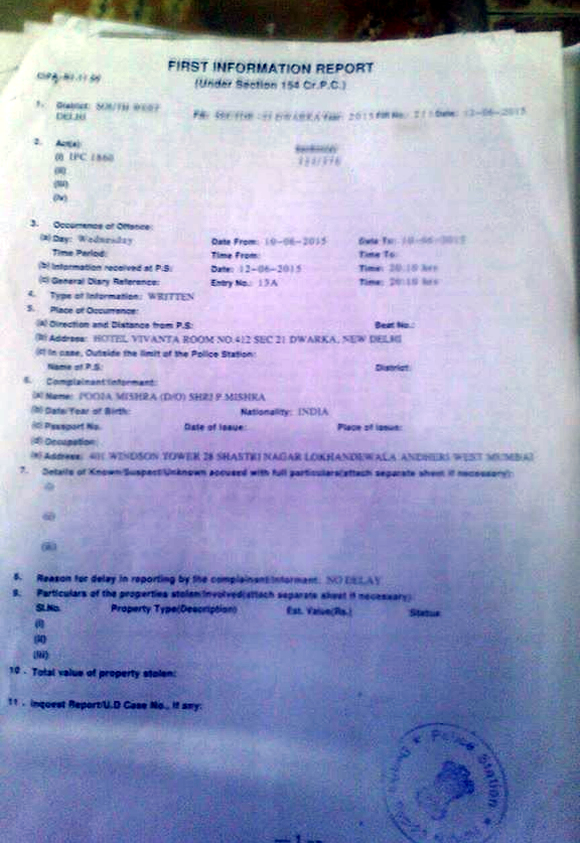 As it is now a police matter, Misrra writes that all the news channels and outlets showing the video will be slapped with a defamation suit of Rs 1,000 crores:

“Needless to say i called the police and and an fir was lodged against the hotel. Shamelessly which the hotel begged me to withdraw on facebook several times.

“As the matter is under subjudice all the news channels who have carried the video and negative stories will be slapped with a defamation suit of 1000 crores.”

Pooja adds that it is convenient that the incident which happened in July was leaked in September, at the same time that Pooja is shooting for her TV show and movie.

She adds that she will not apologise for the incident, claiming that she was acting out of self-defence:

“And NO! I am not SORRY ! If a single independent woman who the society does not live on her terms and condition..lifts her hands in self defence, so should u!”

Pooja adds that more women should have the courage to stand up for themselves and not be oppressed by men:

“Otherwise the only option is to sit there oppressed and WATCH THE ASSAULT TURN INTO GANG RAPE?

“Would u farhom your wife, sister, daughter get endlessly raped? Or would u rather them turn to self defence and nip it in the bud?”

It’s evident from the video the incident took place with Pooja hitting hotel staff whilst accusing one worker of trying to touch her.

However, despite Pooja lodging the FIR in July, no one has been arrested or charged, so it remains to be seen what will be the outcome of this event.