Pooja Misrra, the sexy Indian actress, model and FHM cover girl is now set to launch her singing career, with a catchy Hindi pop track which she is recording in Mumbai.

Pooja will be using her famous phrase, “Spare me” in the song to keep her fans happy.

Pooja Misrra famously known as a model Video Jockey, who has also been featured in an item number in a Bollywood picture Mera Dil Leke Dekho (2006).

Pooja rapidly grew as a celebrity through the Indian reality TV series Bigg Boss 5 where she created controversies almost daily thus earning herself a lot of fans.

With her debut single releasing in a few months, Pooja is now set to commence her singing career as well.

This bold and stunning diva made a worldwide impression with her stint in TV reality shows like Big Switch on the channel UTV Bindass and her entry into the Bigg Boss house which went on to make her an iconic reality star. 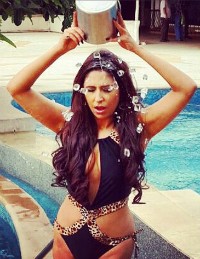 Pooja is known for her controversial and bold appearances. You can expect her to flaunt her boldness either by being video recorded while getting a hot relaxing massage; or during her ALS Ice Bucket Challenge where Pooja took part in her exclusive style while donning a sexy black bikini with leopard print.

The girl of late made headlines with her sexy and seductive FHM India cover in September 2014, where she posed in a stimulating lace body stocking for one of India’s top magazines.

She is clicked posing sensuously in a convertible Mini Cooper stating she is ‘BACK’ and that she will make your popsicles melt!

Pooja, as the ex-contestant of one of the biggest reality shows, Bigg Boss, is at present also blogging for Times Of India to report on Bigg Boss Season 8 which is hosted by Bollywood star Salman Khan.

On her online show ‘Love Sutra’, Pooja is often seen posing as a sexy show host, talking about relationships, taboo topics and advice.

The actress, model, VJ, blogger, surely is versatile as she has even launched her signature clothing line Caliente (meaning ‘hot’ in Spanish) which consists of cocktail dresses and gowns from her workshop in Singapore. The collection was so good that it supposedly sold out in 10 days. 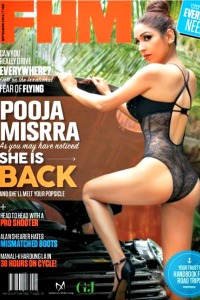 Caliente will be launched in Dubai and London by next year but if you can’t wait already then you can shop her collection online at Pooja’s official website.

Her music career which will be launched with a catchy Hindi pop track that  is currently in production in Mumbai! What’s exciting is that Pooja will be using her famous phrase, “spare me” in the song to keep her fans happy.

Pooja’s debut song will be internationally publicised by the London based Music PR team Sahdev Media, who have worked with a lot of music artists globally.

Pooja who is known for her hot, racy attitude is ready to make a flood back into the limelight with a variety of projects from her singing career, clothing brand to releasing her own Bollywood film as a producer by 2016!

Watch out Pooja Misrra fans, this girl is back with a bang!

Komal is a cinéaste, who believes she was born to love films. Apart from working as assistant Director in Bollywood, she finds herself doing photography or watching Simpsons. “All I have in life is my imagination and I love it that way!”
Yo Yo Honey Singh’s Alcoholic with Akshay Kumar
Kanika Kapoor joins Dr Zeus for Kamlee