Pakistani actress and model, Veena Malik’s recent photo-shoot with FHM India has caused a major media stir with her lawyers suing the magazine for making her nude when she claims she was not, her father dis-owning her for taking lewd photos and the issue regarding the ISI tattoo.

"there is a big difference between being topless and being nude."

Actress Veena Malik has been thrown into the limelight further to her photoshoot for FHM India (For Him Magazine). The cover photo on the specific edition of FHM appears with Veena Malik covering her breasts and nude. However, Veena insists that the shoot which was done was not nude and the photo has been changed and morphed by FHM, making her appear nude.

The issue has become a media frenzy after Veena’s father, Malik Mohammad Aslam, has protested against her decision to take such photos and he has disowned her publicly. He has also demanded that she make a promise not to visit India once the scandal is over. He has stated in a Daily Mirror interview saying: “I have severed all ties with her and I don’t want her to have any share in whatever meagre assets I have until she is cleared of the controversy and pledges not to visit India again.” 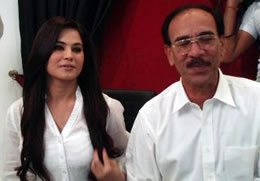 He said: “I have disowned her.” He also indicated that he he hoped his daughter would be punished if found guilty of stripping off for the nude images “so that no other woman would think of doing such thing”. He added: “I can ignore if she disobeys me but I cannot tolerate anything against my country and my faith.”

In addition, to Veena’s father’s outburst, Salim Ullah Khan petitioned a Pakistani court on 7th December 2011 against Zahida aka Veena Malik contending that she should be tried for obscenity, sedition and defamation. However, the Islamabad High Court ruled that the controversial pictures were published in another country and so she cannot be tried in Pakistan. 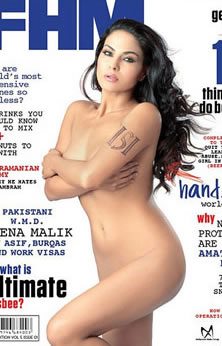 Another issue was that of the ‘ISI’ tattoo in the photo. ISI is the acronym for Inter-Services Intelligence, Pakistan’s intelligence agency. Veena said in an interview that the idea for the tattoo Kabeer Sharma’s idea, who is the editor of FHM India. According to her, the tattoo was supposed to be a humorous addition, something along the lines of: “If anything goes wrong… we say the ISI must be behind this.”

Angered at the public reaction to her doing such a photo-shoot, Veena Malik has hit back. She has vehemently defended her decision for agreeing to the photo-shoot for FHM India and was fully comfortable of what was required of her in the original remit of being topless. She said: “It is my body and what I do with it is my choice. No one can judge me on this.”

When quizzed of being topless, she said: “Actually, I was but I was not nude. You see there is a big difference between being topless and being nude. You will see various shoots here in the Bollywood industry where actresses went topless but they were covered, like the way I was.”

However, she is not at all happy for the way the FHM India magazine published two airbrushed photos showing her in a nude pose without her knowledge.

Taking action against the magazine Veena’s lawyers say she has faced irreparable harm, loss and damage due to morphed photos.

Veena Malik has filed for damages for over Indian Rs 100,000,000 against FHM following their publication of two magazine covers featuring the Pakistani actress and model completely nude.

The lawyers delivered the notice on Sunday 4th December 2011 to the FHM chieft editor Kabeer Sharma and photographer Vishal Saxena as respondents of Maxposure Corporate Media. It outlined Malik’s narrative of events surrounding the photo shoot for FHM, including the claim that “our client was assured that no nude photograph in any manner would be shot by you.”

The notice reiterated that Malik’s photos had been changed. Here are excerpts from the notice:

3. You Kabeer Sharma also informed our client that after the photo shoot, he would contact our client for a short interview which he wanted to publish in the forthcoming issue of the magazine FHM.

10. On 2nd December, 2011, our client came to learn that you have posed naked photographs of our client on the internet site of FHM magazine. You have also circulated and sold the magazine to the public showing the nude photograph. Our client was shocked, astonished and embarrassed to see the said photograph which is published all over the world. It is pertinent to note that there was no written agreement signed by our client and furnished to you as per the Model Release Form which is a contract with your Company. Immediately on coming to learn, our client contacted you Vishal Saxena and Kabeer Sharma. You Vishal Saxena have since then been avoiding our client and our client repeated calls to you have not been replied nor answered. You Kabeer Sharma has also avoided confrontation with our client and have merely sent an SMS to our client indicating that you propose to have a press conference and sort out the issue with our client. You have failed to do so. 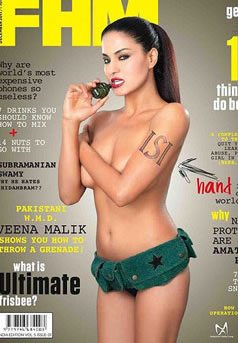 Claiming irreparable harm, loss and damage, the notice said the respondents had committed offences punishable under the Indian Penal Code as well as Information and Technology Act, 2000. The notice called on FHM to ensure the magazine issue would not go into print, remove the tampered photos from the FHM website and pay millions in damages.

Meanwhile, Kabeer Sharma, FHM India’s editor has confirmed having a proof for Veena’s naked photo shoot. Talking to a BBC journalist in Islamabad, Kabeer said, “We have video footage of the shoot as well as emails from Veena about how she’s looking forward to the cover. The idea to have ISI written on her arm was mine, and it was Veena’s idea to have it in block letters.”

Many argue she is a disgrace to her country and religion with a lot saying she is brining shame to her nation. Others feel it is her choice and if this is what she wants to do then no one should judge her. The argument arises as to why there is such uproar when a woman does such a photo-shoot compared to very little noise when men take their tops off all the time in Bollywood?

Veena Malik who made it big in India after her stint on Bigg Boss 4, is due to make her debut appearance in Bollywood movies in 2012. Including, Dal Mein Kuch Kala Hai and Tere Naal Love Ho Gaya, and in a South Indian horror film in 3D called Haunted.

NEWS & UPDATE ON VEENA MALIK
Sahdev Media, Veena’s UK Publicist confirm that actress/model Veena Malik has been missing for the past 36 hours on 18th December 2011. She was shooting for a Bollywood movie, “Mumbai 125 Kilometres”, at Film City in Goregaon of Northwest Mumbai where Malik left in a car after pack-up Friday morning and is not reachable since.

“We have tried to contact Veena since yesterday morning, this is not like Veena to turn her phone off. We are usually constantly in touch via Blackberry messenger and phone calls. we hope and pray she is safe, I would also like to add this is not a PR hoax, police complaints have been filed from our Mumbai team and we are trying our very vest to trace her,” Said Nisha Sahdev CEO of Sahdev Media.

Veena has been under severe depression and stress for the past few weeks due to the FHM matter and family issues alongside a very busy work schedule.

It was then revealed and confirmed by Sahdev Media that Veena is ill and took a few days away from the public eye and turned her phone off without informing anyone. “I have spoke with Veena early hours of the morning she is doing fine, she has a fever and is resting at the moment, she is safe and apologises for all the fiasco,” Nisha Sahdev, UK publicist.

Amit enjoys creative challenges and uses writing as a tool for revelation. He has major interest in news, current affairs, trends and cinema. He likes the quote: "Nothing in fine print is ever good news."
Bollywood loses Dev Anand at 88
Don 2 is ready to Impress