In a bold move, Bollywood actress Veena Malik has allowed Finnish artist, Vesa Kivinen, use her body as a canvas to create art. In an exclusive Gupshup with DESIblitz, Veena and Vesa explain their vision.

"This really is a new experience. Usually in a film I play a character but this is just me."

Great art usually involves the combination of beauty, imagination and extraordinary skill, and artist Vesa Kivinen is no exception.

The Finnish painter and extraordinaire has taken up the services of sultry and sexy Bollywood actress, Veena Malik, to realise his new and innovative vision.

In a new collection of six sensual paintings, Veena offered her own body as the canvas for Vesa’s vision.

The pieces combine both paint and photography as Veena’s decorated body is projected onto the canvas in various stances. This fluidity of forms represents a new type of artistic expression called Artevo or ‘art evolving’. 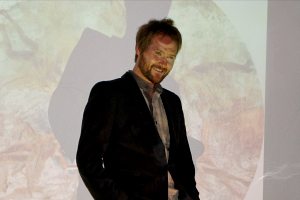 Artevo sees body-painting, photography, and oil canvas all combined to create a perfect piece of art.

“All the works have a story behind them and have a wealth of variety in themes. This is due to working with different people all the time who are varied in temperament, outlook and energy.”

Bollywood actress and model, Veena Malik, is currently promoting her new film Silk. Her choice to help with Vesa’s artistic vision was an evolving one:

“When I heard of the idea I thought. Oh my God. This really is a new experience. Usually in a film I play a character but this is just me,” says Veena. 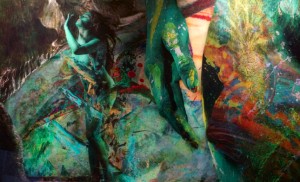 In one piece, titled, ‘The Beginning of a New Era’, Veena has been painted in vivid colours of green. Her body is covered in landscapes – displaying the affinity that exists between the human body and nature – all is earth.

The impact this creates is truly spectacular. Using the human body generates a wholly new approach to texture and representation and is a complete departure from traditional 2D art pieces.

Veena literally comes off the canvas and completely alters our perception of reality. It is Postmodern in its very essence, but with an added element of natural rudimentary common in the Renaissance period, which counteracts futuristic notions.

Also thrown into the mix is a fusion of culture and heritage, represented both by Veena’s exoticness and Vesa’s Western European background. What occurs is a reinvention of cultural norms as we understand them.

The art truly represents a universal theme of life and living, and can be interpreted via any cultural background, harmoniously:

“It’s the East and West coming together. It’s about finding the common origin of humanity. There is an underlying theme that the same force that grows my fingernails, or yours or Veena’s, or the force in Pakistan or Finland or America, wherever, is the same force where we all come from. That’s been the underlying idea to find how similar we are all over the world, rather than how different,” explains Vesa.

What is also interesting about these art pieces is that the paintings are a reflection of the subject’s impressions, rather than those of the painter, Vesa. The unique pieces notably represent a different experience or aspect of Veena’s life.

Vesa has subverted the role of painter and sitter. He becomes a vessel through which art and life expresses itself. Thus, Vesa’s choice in Veena as his muse is ever more important. 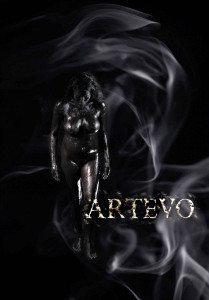 Vesa chose Veena not for her celebrity status but rather for her vivacious courage to live life at her own choosing.

Veena is free from inhibitions and cannot be confined by cultural and social stereotypes.

One of her most remembered TV appearances saw her debate against a religious cleric who slammed her for bringing shame to her faith and country. Being the strong individual that she is, Veena held her own.

Such liberty of expression is what Vesa was inspired by. Vesa admits he admired Veena’s courage to stand up for her own beliefs and rights as a basic human being:

“[I chose her] for her courage, first and foremost. I saw this YouTube video where she had to defend herself up against a Mufti. It wasn’t so much the political, it wasn’t about her being a woman, or it wasn’t about religion, it was nothing like that.

“You saw a very courageous human being handling a very difficult situation with a lot of grace under pressure. I was very impressed by that. So I got in touch with her because of it.” 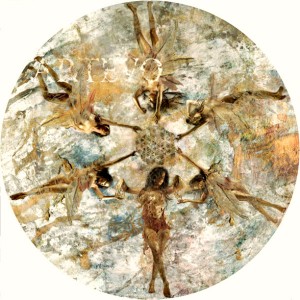 Veena spent some time in Finland as part of this collaboration, where they shot an incredible 30,000 photographs that they went on to shortlist to half a dozen pictures.

Finally, once the project had been completed, they arrived in London to showcase the exhibit that consists of six final intricate paintings of body and art combined. They also plan to take the exhibit and showcase it in other parts of the world:

“I’m very happy and feel privileged to have had the opportunity to present the art we did together with Veena finally. There are no wrong or right ways to interpret what they are.

“It’s about much more than me and her so it’s exciting to now start travelling with the works and see how people around the world will receive them,” says Vesa.

Of course, as with any bold and daring actress like Veena, controversy and judgment trail like wildfire. In her new venture, the Pakistani-cum-Bollywood star has endured some censure from her home nation, where many believe her giving up her body for art as scandalous. But in the art world, her bravery and courage has been praised: 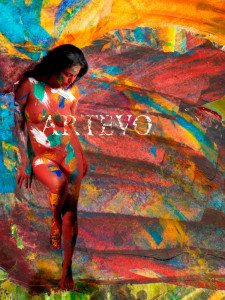 “In Kivinen’s works Veena’s body is only covered by body-paint, which is daring, as in her home country she is always veiled from head to toe,” says writer and journalist, Pasi Kostiainen.

The duo have shown some concern towards the unwelcome reactions they have faced in Pakistan. Vesa is adamant that his purpose is not to be controversial or offend. Rather his aim is to promote spirituality and peace through these paintings.

But Veena is hopeful that those who know her will recognise her bravery: “I hope my fans will appreciate the art and understand what Vesa’s vision was for this project.”

But whatever the reaction she faces, what is certain is that Pakistani star and philanthropist Veena Malik will always do what she wants in life, and that too with maximum impact!

Aisha an English literature graduate, is a keen editorial writer. She adores reading, theatre, and anything arts related. She is a creative soul and is always reinventing herself. Her motto is: “Life is too short, so eat dessert first!”
Balraj Khanna a Journey of His Own
The Library of Birmingham ~ Rewriting the Book