The Library of Birmingham ~ Rewriting the Book

After seven long years, the newly built Library of Birmingham is ready to open its doors on September 3, 2013. DESIblitz spoke to architect Francine Houben and Director Brian Gambles about the extraordinary project.

"We feel a fantastic sense of pride in this library, and hope people are going to share that."

September 3, 2013 marks what can only be described as a pivotal day for the city of Birmingham.

The opening of the much-anticipated Library of Birmingham has finally arrived, and swarms of local residents and city dwellers are expected to visit the newly built cultural destination.

The building itself can be summed up in two simple words: breathtakingly spectacular.

Designed by Dutch architects, Mecanoo, and led by head architect Francine Houben, there is something distinctly open and inviting about the new Library of Birmingham that is expected to attract over 3 million visitors each year. 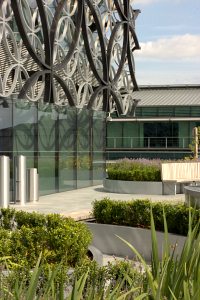 Situated in the centre of Centenary Square, in the heart of Birmingham’s town centre, the Library makes a striking impact on the surrounding sky-scape.

The entire project which cost £188.8 million in total represents the next phase in the regeneration of Birmingham, which has already seen the likes of the Bullring and New Street station transform the city into a city of the future.

In an exclusive interview with DESIblitz, Director of the Library, Brian Gambles says:

“We couldn’t be more excited. This has been a fantastic journey. We’ve all been working hard, and together on this project for about 7 years now.

“We feel a fantastic sense of pride in this library, and we hope the people of Birmingham are going to share that.”

It is no secret that Birmingham is perhaps one of the less aesthetically pleasing cities of the UK. Once a smoke-filled industrial hub, it has faced a complete overhaul in recent decades, with much of the town centre being transformed into a modern and contemporary setting. 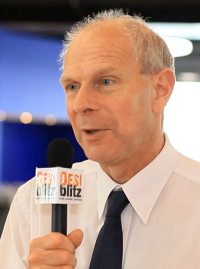 Part of the redevelopment of the city, the Library sits on heavy expectations to bring Birmingham out of its industrial past and into its culturally diverse future:

“The city took a decision that refurbishing the existing Central Library was not a sensible or economic way to proceed. We actually had a huge opportunity to create a new building that really spoke about learning and culture and embodied that.

“It really gave us a chance to be part of the regeneration of Birmingham and to reinvent Birmingham as a city that is not just about manufacturing or services, it is about culture, it is about learning. It is a great city and we should be proud of it,” adds Brian.

The new structure of the library has most definitely been a topic of heated discussion among dinner parties for the last two years. And it is not difficult to see why many may not regard it as conventionally picturesque.

From afar, it appears an obtuse, sharp-edged square building, covered with kaleidoscopic circles attached like scaffolding over its entire surface. But once you delve in more closely, your eyes are struck by the intricately delicate detailing of the circles against the golden yellow of the metal walls and full glass windows.

Needless to say, looking out from the inside is when you really are blown away by its immense structural beauty. Everything has been meticulously thought through with extraordinary detail and understanding. 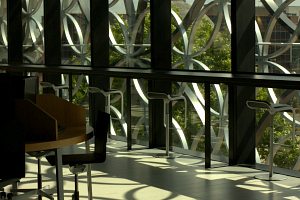 The circular scaffolding on the outside creates elaborate shadows on the ceramic and tiled floors of the galleries, which shorten and elongate according to time, weather and season.

Each level and section harmoniously blends into the next, and the interior is nothing like the hard-edged exterior.

“Perceived as an extension of the street, the library’s interior journey is intended as a sequence of events and experiences, each discernible from the next,” explains Francine.

The Library then, exists in multiple layers. Ten levels in total, the library also merges with the adjacent Repertory Theatre, which has also been refurbished as part of the new build.

The spacious foyer and studio theatre surround the outside musical Amphitheatre, which will be used a performance space in Centenary Square. 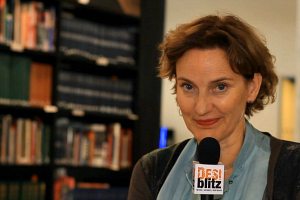 The Amphitheatre links to the underground Children’s Area where fun learning activities and space have been designed to offer a truly interactive social experience.

Perhaps the most breathtaking section of the library is the five floor Book Rotunda that emerges from the heart of the library. It fuses traditional book keeping in curved shelves with futuristic blue-lit escalators.

One of Francine’s particular intentions was to highlight the library’s impressive world-class collections. The archives are situated in The Golden Box, high up in the library and atop sits the recreated original Victorian feature, the Shakespeare Memorial Room.

Consisting of wooden and glass paneling, it is the most traditional aspect of the library that has seen painstaking restoration since its last use in the 20th century. 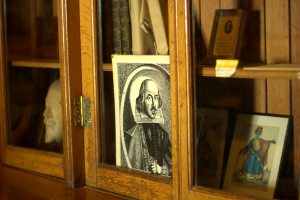 Along with this, are two open terraces which offer comfortable seating amongst beds of wildflowers and overlook the entire city from every angle:

“The stacking of the library volumes creates an opportunity for outdoor gardens, each one relating to the city at a different scale. The lower terrace – The Discovery Terrace – overlooks Centenary Square, and is the most public,” explains Francine.

“In contrast, the upper terrace – The Secret Garden – has a more introverted, intimate atmosphere, reflecting its elevated position in the building. The sloping beds of the garden respond to the gentle slopes around Birmingham,” she adds.

Birmingham is one of the most diverse cities in the whole of Europe with approximately 40 per cent of citizens residing here coming from an ethnic background.

The city reflects British multiculturalism perfectly and for this reason, the Library has been designed to cater for the vast communities of South Asians and other ethnicities that live across the ever-expanding city. The library will house an extensive catalogue of multilingual resources for all nationalities.

As Francine explains: “Investing in knowledge is a key factor for the future success of societies. Libraries play a crucial role in this because they stimulate the growth of a collective knowledge bank and support self-development.”

“Therefore, a library must truly be a public building. With this goal in mind, I have designed a ‘People’s Palace’ for Birmingham.”

“I am truly excited about the new library, and I think Birmingham has shown tremendous foresight and initiative in leading the way with such a project.

“I think this is just another example of Birmingham’s dedication and commitment not only to education and learning, but also the responsibility of upholding and maintaining the legacy we possess as a city of great thinkers, writers, artists, and innovators.”

Following its opening on September 3, 2013, the new Library of Birmingham will see up to 10,000 visitors each day. With so much to explore and experience, the library will be a complete socially cohesive establishment welcoming visitors from all backgrounds and races. Thus creating an inclusive community that reflects the spirit of Birmingham.

Aisha is an editor and a creative writer. Her passions include music, theatre, art and reading. Her motto is “Life is too short, so eat dessert first!”
Vesa Kivinen paints Veena Malik for Artevo
The Cultural Changes of Pakistan