Kapil Sharma angrily fat-shamed a Twitter troll after the user directed a jibe to the comedian in relation to Bharti Singh’s drugs arrest.

"Until you get caught, you say ‘no drugs’ Kapil Sharma."

Kapil Sharma lost his temper with a Twitter troll and fat-shamed him after the person made a drugs jibe towards the comedian.

The message was in relation to Kapil’s colleague, Bharti Singh, and her husband Haarsh Limbachiyaa, who were arrested on drugs charges.

The NCB discovered a small quantity of cannabis at their home, which they admitted to having consumed in the past.

A netizen decided to use their arrests to drag Kapil Sharma’s name into the matter.

In addition to mentioning the arrests, the troll suggested that Kapil may soon be arrested also on similar charges.

The user wrote: “What happened to Bharti? Until she got caught, she said she did not take any drugs.

“I think it is the same case with you. Until you get caught, you say ‘no drugs’ Kapil Sharma.”

This provoked an angry response from The Kapil Sharma Show host who fat-shamed the troll.

Kapil replied: “Fatty, first get yourself a shirt that fits.” 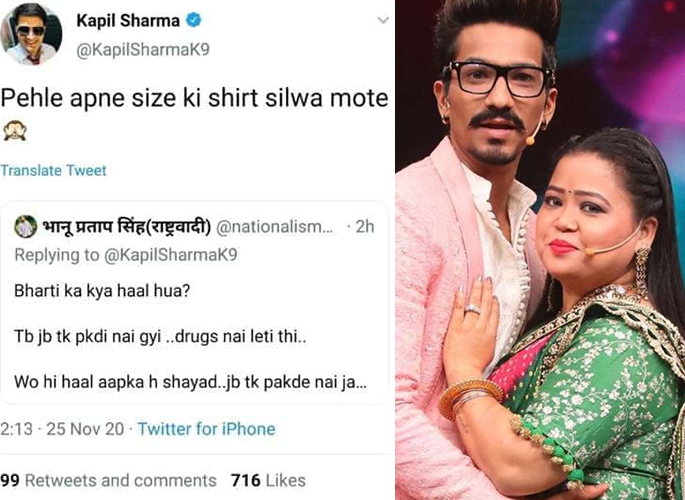 While the tweet was later deleted by the comedian, it quickly went viral.

Since the tragic death of Bollywood actor Sushant Singh Rajput, a drugs angle has come to prominence and showbiz stars have been kept under a close watch by the authorities.

Bharti and Haarsh were arrested by the NCB following a tip-off from a drug dealer.

NCB officers discovered cannabis at their Mumbai apartment and they later told police that they had consumed cannabis in the past.

“I have worked with Bharti a lot. I was surprised when I got to know about her arrest first and thought it’s fake.”

“Then when news channels contacted me, I said maybe a drug peddler named Bharti to implicate her but then I was told she has confessed.

“I was shocked and sad. This is like an allegation on our entire comedian fraternity, if we go to perform anywhere now, people will look at us with doubt like,’ Raju iss age mein bhi dhamaal kar raha hai’, our numbers will be less.”

“There’s a psyche in our country regarding consumption of drugs, and it’s a personal choice if one wants to consume drugs and alcohol, I firmly believe none of these are good for health and make (the) physique weak.

“The news about Bharti was shocking, and I am not being prude shocked here ki ‘aise kaise hua’, it’s like sad that years of reputation… it’s not worth it at the end of the day.

“Having said that, there’s no need to look down upon her or condemn her for usage.

“It does not make her a bad person from any angle, or doesn’t take away from her talent.”

Dhiren is a journalism graduate with a passion for gaming, watching films and sports. He also enjoys cooking from time to time. His motto is to “Live life one day at a time.”
‘Jallikattu’ is India’s Official Entry for Oscars 2021
Karan Johar apologises for Netflix ‘Bollywood Wives’ Title