The Royal Asiatic Society presents the opportunity to explore the ‘Great Mughals’ through a fascinating exhibition at the British Library.

Lead Curator Dr. Malini Roy has described her experience at the British library as “lucky” as well as “a once in a lifetime opportunity to look at rare paintings, manuscripts and art.” The exhibition titled – Mughal India: Art, Culture and Empire includes historical accounts, portraits and intimate glances into the lives of the emperors.

In history, the Mughal Empire stretched from Kabul in the Northwest and covered almost the entire South Asian subcontinent. This presentation is the first to document the complete era, from the 16th to the 19th centuries, through more than 200 exquisite objects.

People attending can witness one of the most magnificent empires that civilisation has ever viewed in its extensive heritage collection exhibited at the British Library.

The exhibition started in November 2012 and runs until April 2013, demonstrating a prodigious number of rulers that possessed exceptional skill in statecraft and culture. The rulers were pioneers in empire building as well as patrons of architecture. 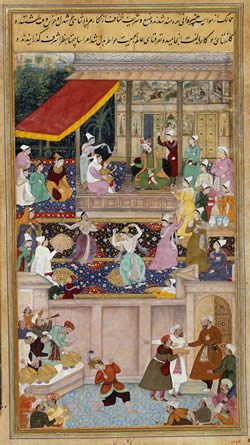 Described as ‘a revelation,’ ‘spectacular’ along with ‘enthralling’ by British newspapers, the lives of the emperors are revealed with their effusive courtly life cycles and fondness for splendour. It’s a visual banquet that discovers politics and Mughal patronage of the arts and sciences, not restricted to just monuments such as the Taj Mahal and the Red Fort.

Dr. Roy has taken responsibility to assist visitors at the spectacle, welcoming them into the sumptuous realm of the Mughals. Behind the stunning visual imagery are dramatic stories of the empire, rife with poisonings, love affairs and the constant hunger for knowledge with power.

Highlights of the exhibition consist of a newly identified portrait of Prince Dara Shikoh [1615-59], the favoured son and heir-apparent of Emperor Shah Jahan [r.1627-58] credited to the artist Murar, circa 1631-32. This portrayal features in the only surviving album compiled by Dara Shikoh, a dedicated connoisseur of the arts and religious scholar. Dara Shikoh personally devoted the album to his beloved wife Nadira Banu Begum in 1641-42.

Furthermore, on demonstration is Akbar ordering the slaughter to stop in 1578 – a folio from an imperial manuscript on the history of Emperor Akbar (r.1556-1605) attributed to the artist Miskina, circa 1595.

Akbar, one of the greatest emperors of the Mughal era was intellectually skilled in statecraft. He was an advocate for promoting religious tolerance. The scene depicts Akbar in contemplation during an organised hunt; in a moment of mystical intervention, he asks for the animals to be unrestricted.

‘The Panorama of Delhi,’ a highpoint painting by Mazhar Ali Khan [1846] is also on display. The five metre protracted painting features a panoramic view of Delhi, inspired by the southern exterior tower of the Lahore Gate at the Red Fort.

This 360-degree synopsis provides a pictorial record of the indigenous area and the Mughal City. This includes the palace complex just ten years before many of the interior buildings were damaged or entirely demolished in the aftermath of the 1857 uprising. Visitors will be capable of observing the palace, including the Chandni Chowk area, nowadays a busy tourist drag. 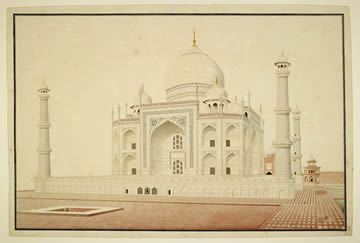 Moreover, the exhibition presents Mid-17th century Mughal cavalryman and horse armour. On loan from the Imperial Armouries is the incredible Mughal armour for a cavalryman and horse. The cavalry wore mail and plate armour [zereh bagtar] with helmets [kolah zereh]. They also carried a cane shield [dhal], while their horses were regularly protected by mail and plate armour [bargustawan]. They were equipped with a sword and composite bow, while some also used a lance, mace [gurz] or saddle axe [abarzin].

In addition, ‘The Notebook of Fragrance’ [1698] is on revealed for the first time. This is the exclusive manuscript of a handbook featuring household management and activities, reflecting the more sophisticated side of the Mughal lifestyle.

In seventeen chapters the unidentified author deliberates matters as diverse as formulas for perfumes and soaps; ingredients for meals and drinks; arranging a house and garden; how to fit out a library; weights and measure; fireworks; and games of chance. It was envisioned for leaders, respected Amirs [chieftain], and Senior Administrators – including Mughals – in Shah Jahan’s new imperial capital, Delhi.

Tourists at the location can also access the ‘Instructional poem for pigeon-fanciers’ by Valih Musavi [1788]. Put on show for the first time is the ‘Book of Pigeons’ [Kabutarnama], consisting of two treatises on pigeons, their maintenance and breeding.

The book, which has several illustrations, includes one portrait showing birds of various colours, and chicks in nesting-boxes. The late Mughal emperors were great fliers of pigeons and thus pigeon-houses were established in the courtyards of the Red Fort.

In the presentation also, is Muhammad Shah making love [c. 1735]. Muhammad Shah was known as ‘Rangila’ [pleasure-loving], and artists often illustrated him celebrating festivals or revealing his exceptional talents as a sportsman. The provocative image of Muhammad Shah explicitly engaged in a sexual happenstance sharply deviates from traditional portraits of emperors at leisure. 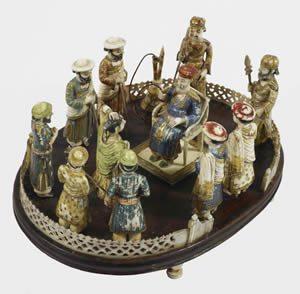 One of the most influential artists of that period, it reveals the emperor’s illusions or confessional beliefs. Surely only the emperor himself could have directed such a depiction.

Another highlight of the exhibition is the Ex-King of Delhi, Bahadur Shah II, awaiting his trial [May 1858]. This is the only documented photograph of Bahadur Shah [1775-1862], the last Mughal emperor. The photo was taken in May 1858, while the British detained him in Delhi awaiting trial for his part in the Uprisings. The photo shows the emperor reclining on a charpoy, smoking a hookah.

It was, ostensibly, common practice for Europeans to visit the ex-ruler during his imprisonment. In January 1859, Bahadur Shah was brought before a British military court and following a trial enduring two months, was found guilty on 29th March 1859 of encouraging the rebels. He was later sentenced to exile in Rangoon, where he died in 1862. 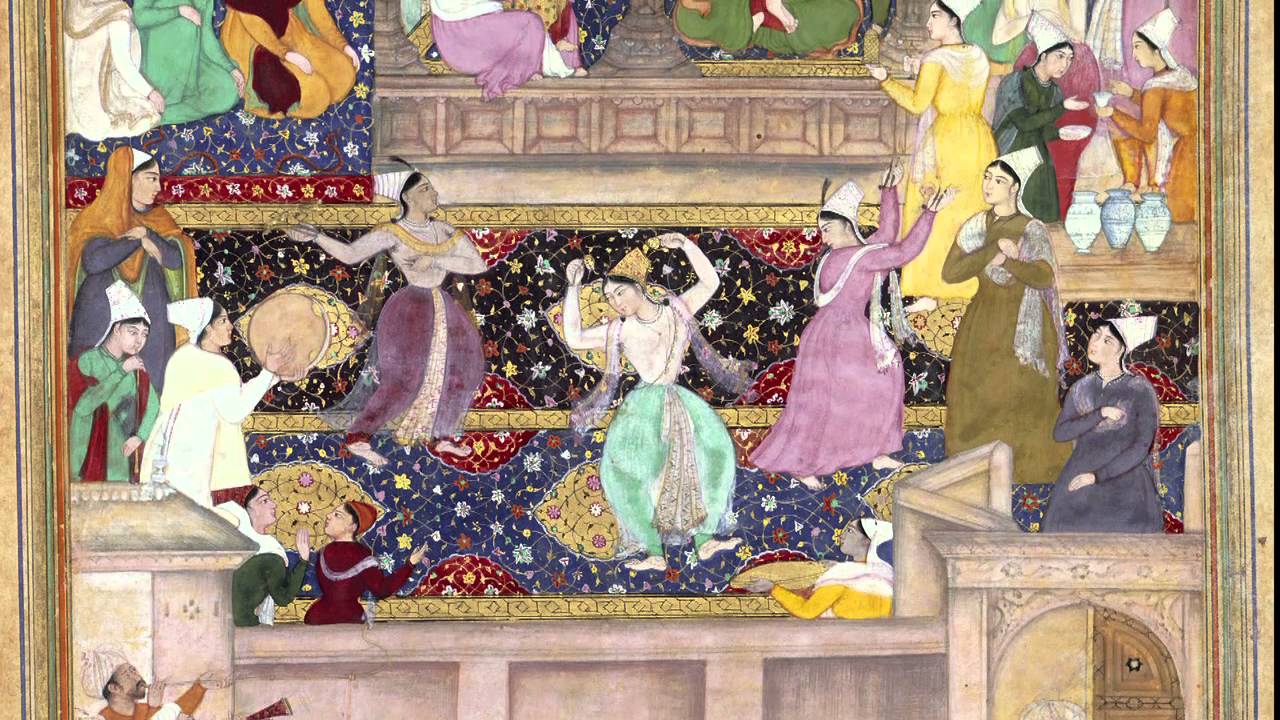 There is also a photograph of Bahadur Shah II representing him as an aged figure just before his exile. His filigreed golden crown, one of the exhibition’s highlights, is inset with diamonds, emeralds, rubies and pearls. John Falconer, the library’s supervisor of photography refers this as “a not so subtle symbol of the transfer of power, voluntary or involuntary.”

The crown was delivered to a sale block in Delhi. A British major snapped it up, and sold it onto Queen Victoria. It has been lent from the royal collection to this educational and notable display.

The final room of the British Library brings ‘Mughal India’ to its conclusion. By 1857, the Mughal Empire was in decline. In Delhi, Indian soldiers mutinied, trouncing British civilians. In response, Britain brutally crushed the uprising and ended Mughal rule.

Glorious monuments remain, such as The Red Fort in Delhi and the Taj Mahal in Agra, but there is poignancy to all that has vanished. All that is left of many tremendously patterned palaces and tombs are the architectural sketches on display at the exhibition, and a five-metre long panorama of Delhi as it once was.

Mughal history has been forgotten at times, but this exhibition at the British Library will surely dominate scholarship, reigniting one of the world’s chief dynasties.

Krystal Volney is an award-winning poetess, author, playwright and journalist. Some of her interests are new technology and mathematical biology and a favourite quote is "One way to get the most out of life is to look upon it as an adventure with most things.”

The 'Mughal India: Art, Culture and Empire' exhibition runs until 2 April 2013 at the British Library in London,UK.