Nimah Nawwab has touched the hearts of many with her sensitively written poetry that tackles issues relating to gender, equality and tolerance.

"This collection differs vastly from the type of poetry that I have been engaged with for many years."

Born in Malaysia to a Meccan family comprised of educated scholars and writers, Nimah Nawwab has become a literary gem that is a rare but rewarding find.

If one reads her poetry first, her origins may take many by surprise.

After all, the stereotype that usually surrounds Arab women paint them as subservient, quiet and demure, at the expense of their own happiness and intellect.

Enter Nimah Ismail Nawwab, a strong, intelligent woman, from an educated background where she was actively encouraged in pursuing the life of an academic once she showed interest in literature.

It couldn’t be more fitting considering the core of Nimah’s poetry and many academic articles focuses on doing away with stereotypes and the copious amounts of negative imagery that surrounds her world.

Though Nimah Ismail Nawwab draws upon her own experiences as an Arab woman, her poetry explores themes and issues which are common to all, regardless of gender or race.

The way in which she tackles and explores themes has enabled her poetry to deliver a message that has reached, touched and been understood by people from all around the globe. 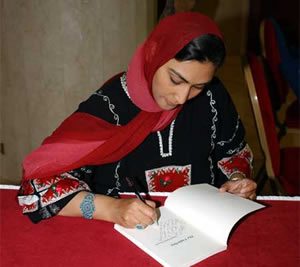 Nimah first developed an interest in English Literature when she was a young child. She recalls how her father, Ismail Ibrahim Nawwab used to read out Shakespeare as her bed-time stories when she was at the tender age of eight.

“He inspired me…he also exposed me to many fields of interests by building up a huge library of very hard to come by books in Saudi Arabia in whatever sparked my interest, whether it was space or animal behaviour,” Nimah explains.

Father and daughter were quite similar. Both shared a passion for knowledge and both were in love with language. Nimah’s father wrote on a variety of subjects including matters relating to faith.

It was this hunger for academics and literature in particular that drove Nimah Ismail Nawwab to immerse herself completely in her studies, including high-school book projects. She later developed an interest in editing.

She graduated from university with a Bachelor’s in English Literature before finding a job as a translator.

Her work has been translated into several different languages including Arabic, Japanese, Chinese, Portuguese and French, amongst others.

When asked about whether there is any fear that the original message of her poetry might get lost in translation, Nimah admitted that while there was some fear, the positives of translation far outweighed the possible damage inaccuracies and language differences could cause to her original meaning.

“I have always thought that translation of poetry is the highest grade of translation and also much will be lost…there are still many layers of meaning that readers are missing in such translations but it would be a big loss to humanity to not have such work translated.”

Nimah went on to mention that in regards to her own work, she makes a special effort to choose poems that will keep as much of their original meaning.

This, she explains will be carried on further with her latest collection entitled The Canvas Of The Soul, where a number of her poems have been written with translation in mind.

Nimah first gained recognition as a poetess with the release of her first collection of poems, called The Unfurling.

With the release of this collection came fame both in her home-country, Saudi Arabia, and abroad. Nimah is also thought to be one of the first Saudi writers to have had a public book-signing event.

When asked how she feels about the attention she has garnered, particularly with regards to her portrayal of Arab women, there was only one word powerful enough to convey her feelings. 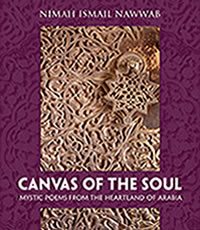 When she is not on tour promoting her latest poetry collection or performing readings of her work, Nimah often delivers lectures on women’s issues both nationally and internationally.

She has become well known for hosting a variety of presentations and workshops, all dedicated to educating and empowering youth.

Aside from these pursuits, Nimah works in Public Relations, and as an editor and photographer for a company called Saudi Aramco.

Her first collection of poetry took Nimah four years to put together. Nimah herself refers to The Unfurling as the result of “four years of midnight inspirations” due to the fact that she cannot sit down to compose poetry until the late hours of the night.

Her second collection differs from the first and proved to be a marked change in subject from the topics Nimah usually explores.

Drawing inspiration from Sufi music, landscapes and human emotion, The Canvas of The Soul speaks to the hearts of literature aficionados worldwide.

Instead of inciting and drawing awareness to political issues, the focus is more on easing the reader into tranquillity and peace of mind and facing their own insecurities. An example of this kind of poetry can be found in The Arena.

Come, come face to face
with yourself
rekindle the flame of truth.
Look past the frayed, the marred
the stain of imposed dictated musts
let the chambers, walls and doors
implode into a new arena
where the face to face
brings forth a rebirth
and the Path Maker supersedes all. 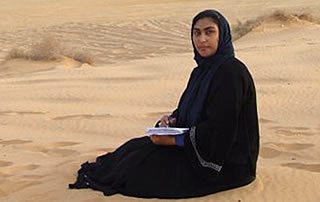 Indeed, Nimah Nawwab’s work has been added to school curriculums across the globe, including countries such as Arabia, the United States, Canada, Singapore, Japan and India.

“The lessons that can be taken from my work depend on what students and teachers gain from each individual piece. The beauty of poetry is that the experiences of each reader colour the meaning.”

“I call her my inspiration because on hearing her read modern day poetry, I started gaining an interest in the same. I had never aspired to be a poet. To this very day when I enter a room, and people call out for the poet, I turn around and look for the poet myself.”

Other sources of inspiration have fuelled Nimah throughout her illustrious career. Sounds, life experiences, scents, sights, and global affairs have all served as ample food for thought.

But for the budding writers who grow day by day in number, Nimah had some simple advice to impart.

“Read, read, read. Be honest in your projection of thought. Be brave, and start with what lies closest to your heart and go on from there. It will all fall into place.”

There is no doubt that you will hear and see the name Nimah Nawwab in the world of poetry much much more in the future.

Simi has a thirst for anything to do with classical music, arts and literature. She can't function without playing the piano at least once a day. Her favourite quote is "Enthusiasm is excitement, with inspiration, motivation and a pinch of creativity."
South Asian Literature Festival 2012
British Library Exhibition for Mughal India