The South Asian Literature Festival celebrated its third year with a wonderful participation of many literary types from the South Asian writing world.

In just three years, the South Asian Literature Festival (SALF) has quickly become known for celebrating established and emerging talent from this region of the world. The festival brings together writers from a variety of backgrounds, including Indian, Pakistani, Bangladeshi, Sri Lankan, and Nepalese, amongst others.

The first festival took place in 2010, and had an impressive 35 events, with more than 70 speakers across 2 weeks. The events were spread around popular performing arts venues in London, Leicester and Brighton. The festival also built links with local communities such as schools and libraries.

In 2011, the festival expanded with more than 80 speakers and artists in 50 events, which was spread across the capital, and in selected UK cities.

This year, the festival showcased an eclectic programme, featuring diverse subjects such as the origins of fairy-tales, the world economy, sports, poetry and the Mughal Empire.

The festival also opened up a platform to showcase new writers, as well as showcasing their favourite established authors on their upcoming literacy projects. For example, the release of a new anthology of short stories called “Five Degrees” was a feature at the festival. 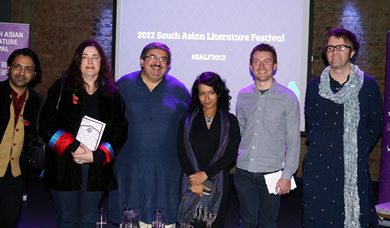 The South Asian Literature Festival has cultivated a reputation for not only offering something for everyone, but for surprising, entertaining and educating audiences on the finer points of South Asian literature. Often, SALF invites audiences to think about well-known Western literature in a very different light.

This year’s opening day is a perfect example of how the festival explores the heritage of literature. The festival kicked off proceedings by discussing the topic “Shakespeare in South Asia.”

The event Shakespeare in South Asia took a deep look at the journey of Shakespearean story-telling in South Asia. The event compared ancient Sanskrit epics such as Ramayana and Mahabharata, through to the sometimes formulaic world of Bollywood to some of Shakespeare’s greatest plays.

The debate was hosted by bestselling author and professor of Indian Cultures and Cinema at SOAS University in London, Rachel Dwyer. Also participating in the debate was journalist and writer Salil Tripathi, Guardian writer Andrew Dickson and Professor of English Literature and critic Nandini Das.

Rachel Dwyer introduced the participants at the event, before handing the spotlight to Nandini Das, who talked about the history of Europe and its relationship with Shakespeare, and how Shakespeare might have received inspiration from India.

Next to speak was Andrew Dixon, who discussed that to understand Shakespeare fully, one should perform his plays rather than simply study them in depth.

Salil Tripathi spoke next in the debate, and he discussed how Shakespeare had similarities to Sanskrit epics.

“If I was to look deep into Shakespeare then there are several vivid connections to Ramayan and Mahabharat. If I wanted to study the theme of jealousy, do I think about how Othello feels or should I look at how Duryodhan feels in the Mahabharat, in terms of losing an empire to cousins he doesn’t like?”

He went on to compare other themes that occur in both Shakespeare and South Asian epics, including drawing comparisons between Hamlet and Arjuna in their more indecisive moments.

He also drew a comparison between the ambitions of Julius Caesar and Raavan and discussed love and romance, highlighting similarities between Romeo and Juliet, and Heer and Ranjha.

“So if one goes really deep into it a lot of these plots have always existed in Indian Stories, Indian Ethos and Indian Culture,” Salil concluded.

DESIblitz caught up with Salil Tripathi after the event and asked him about his thoughts on the debate. “I think it just opened my mind on how rich the topic is. There was still a lot of things in my notes that I wanted to talk about.”

The Bollywood industry has seen many adaptations of Shakespeare. 2003 saw an adaptation of Macbeth in the release of Maqbool, which starred Irrfan Khan and Tabu.

Omkara was an adaptation of Othello, and was released in 2006 which starred Ajay Devgn, Kareena Kapoor, Vivek Oberoi and Saif Ali Khan. It received rave reviews and was awarded with many accolades.

When asked about these adaptations, Salil Tripathi felt that they remained true to the original. “If you see all of them they’re talking about universal emotions and universal ideas and themes, but they are bringing them and making them Indian whilst being true to the cause and the essence”.

One of the organisers of the festival is Bhavit Mehta, who made the leap from scientist to writer in 2007 and produced the children’s book Laghu The Clever Crow. Thoughtfully narrated and with vibrant illustrations, the book was a huge success and encouraged a universal message, to never judge based on appearance.

“But literature is one aspect of South Asian culture which hasn’t had that similar exposure or awareness and that is why John Slack and I felt this is the right time to bring this kind of festival to London.”

Bhavit Mehta brings in a lot of new talent into literature industry, so when asked about this he exclusively told us: “I think the role we can play is to be at the platform, where we can hopefully expose their work to a wider audience, so people can take an interest in it. These things are dependent on funding and resources, and we hope that those people come forward, so then their work is exposed.”

Faisal has creative experience in the fusion of media and communication and research which increase awareness of global issues in post-conflict, emerging and democratic societies. His life motto is: "persevere, for success is near..."
Chitra Banerjee Divakaruni ~ The Award Winning Author
The Gifted Poet Nimah Nawwab