Pakistani actress turned singer Veena Malik has reportedly tied the knot on December 25, 2013. The singer had her Nikkah ceremony in the early morning at a court in Dubai.

"I’m more than happy today, I think I’m the happiest girl in the world."

Has Veena Malik finally tied the knot? The Pakistani personality who has stirred much controversy over the last few years for her exuberant style and opinions was reportedly married in a small Nikkah ceremony in what appears to be an arranged marriage.

Her new husband is Asad Bashir Khan Khattak who runs businesses in both Dubai and the USA. Khattak is the son of Veena’s father’s friend.

The ceremony which took place in Dubai was attended by Veena’s parents and her new in-laws. 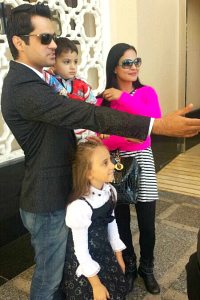 Veena tweeted a wedding band picture along with the happy news early on Christmas Day, soon after the ceremony: “I have found my Soul mate…. my Friend…my Partner!!!”

Speaking to reporters in Dubai who had caught on to the breaking news, Veena said: “I’m more than happy today, I think I’m the happiest girl in the world. Destiny just plays its part, we were destined to be there on this particular day.”

Over the last few months, Veena has been surrounded by a media frenzy trying to figure out who her latest beau is.

Earlier in 2013, she was linked to a Norway businessman, Shaikh Umar Farukh Zahoor, who she had been supposedly dating and set to marry. Even an April’s Fool prank had suggested that she had got hitched, but this later turned out to be false.

However, in an exclusive interview with DESIblitz she quashed all marriage rumours insisting that there was no love on the cards, or at least nothing that she was willing to share publicly so soon.

Media in Pakistan and Dubai then took up the marriage inquiry by reporting that Veena was linked to a Dubai man and had plans to marry in 2015. In the October interview, she said:

“I believe in the institution of marriage. Also, I have seen my family members enjoying a blissful married life. I too would love to belong to the man forever after getting married.” 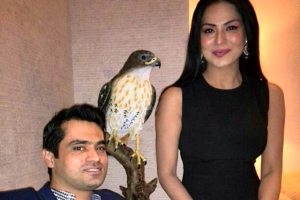 “I have had my share of break ups. It would not be too much to say that I have always ditched men. I am the one who has broken up with all my boyfriends.

“Undoubtedly, I have insecure feelings. I somehow after being friendly to them feel that this guy is unsuitable for me. I want a man to be honest and love me whole heartedly.”

“I am keeping my fingers crossed and am all set to tie the knot sometime in 2015. Will it be a Sheikh or someone from Dubai? Well, I am not sure myself but yes, I am contemplating to get married to a Muslim. I have been living in Dubai for many years now. So could be someone from Dubai,” she teased.

Now it appears that Veena has found the one she has been looking for in the form of Khattak, and what is more is that she has chosen to have a traditional arranged marriage as well.

Wedding bliss comes at a great time for the star who has also been celebrating her recent career move into music. Her latest song, ‘Rum Rum’ comes soon after her first single ‘Drama Queen’. 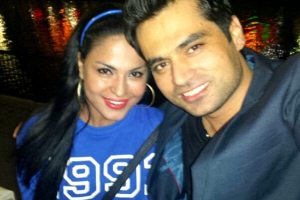 Interestingly, it is thought that Khattak, while being a successful businessman, is also a keen singer himself and has released an album.

Khattak spoke to reporters in Dubai saying that he was very happy.

He admitted that he had always liked Veena and had been able to convince his parents to agree to the union. He said he would plan a big celebration party with his friends soon.

Veena is hoping for a lavish ceremony in Dubai. Current rumours on the web sphere say that Veena is now waiting for her American visa. She will then travel to her new in-laws to America via Saudi Arabia after her Rukhsakti in Dubai.

Trying to keep the marriage plans as vague as possible, Veena said: “You will just get to know the details very soon.”

It seems that there are double celebrations all around this festive season. DESIblitz wishes Veena a huge congratulations on her wedding nuptials.

Aisha an English literature graduate, is a keen editorial writer. She adores reading, theatre, and anything arts related. She is a creative soul and is always reinventing herself. Her motto is: “Life is too short, so eat dessert first!”
IIFA Awards moved to Spring 2014
Dhoom 3 Most Successful film of 2013