‘Mumbai 125 km’, directed by Hemant Madhukar has Veena Malik and Karanvir Bohra who are all set to scare their fans with their forthcoming 3D film.

"I am playing both the 'thriller' and 'horror' element of the film."

Horror film ‘Mumbai 125 km’ is about a night when five friends who are travelling from Pune to Mumbai get stuck 125 km away from Mumbai due to strange horror incidents.

The film, ‘Mumbai 125 km’ stars actress Veena Malik along with the TV actors, Karanvir Bohra, Vedita Pratap Singh, Joey Debroy, Vije Bhatia, Aparnaa Bajpai and Rajiv Anand. The story of the movie is written by Hemant Madhukar and Dheeraj Rattan who have created enough mystery, fright and thrill through the film plot. 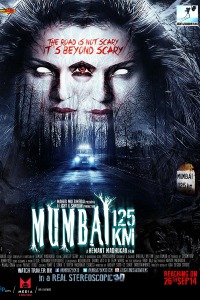 Majority of the audiences think, its not the stars but the thrill and the spine-chilling experience that makes a 3D horror film exciting and interesting to watch. Thus, to give the audience that thrilling effect, ‘Mumbai 125 km’ has joined the 3D horror film trend and interestingly has been shot in real stereoscopic 3D format similar to the format used for Hollywood’s Amazing Spiderman – Spiderman 3 and James Cameron’s Avatar.

After previous films, Veena Malik is seen in a completely new avatar in this movie. She portrays an evil spirit in the film which is an eerie character with a haunting presence.

Veena Malik said: “Mumbai 125 km is a 3D horror film with Telugu filmmaker Hemant Madhukar, and it was really hard to shoot. Now-a-days many directors claim their film to be 3D but actually it is a 2D film which is converted into the 3D format. I am playing both the ‘thriller’ and ‘horror’ element of the film.”

Bizarre rumours suggest that Veena Malik who had been playing the role of ghost in the horror film, walked out of the film due to her wedding which clashed with the final stages of the film shoot.  Rumours further suggest that strangely, director Hemant Madhukar, with the help of another actress and using Veena Malik’s mask, completed the film. 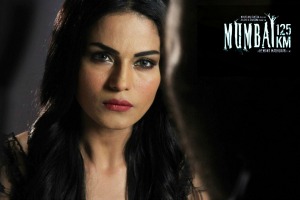 Speaking about bizarre, recently the famous TV actor, Karanvir Bohra, had gone to Ajmer Sharif Dargah and while returning to Mumbai, he experienced something very unusual related to his horror film. He saw someone injured on the road and as he got out of his car to help the stranger, he spotted the milestone at the spot, which read ‘125 km to Jaipur’. Karanvir said: “A milestone bearing the same number as my film’s name gave me an eerie feeling.”

The promo of the film which was uploaded on YouTube reached the one million views mark within two weeks. It is quite fascinating to know that the film was shot within 82 nights and doing justice to its title, it was shot on the Mumbai-Pune highway.

Speaking about his film, Director Hemant Madhukar clarified that he wanted to shoot the film in 3D, which is time consuming, and wanted actors who could give him dates at a stretch for the shoot.

“It is in a way the first horror film shot entirely on a highway. Obviously I cannot have a Shahrukh Khan or a Salman Khan for a horror film. So I was looking for newcomers and actors who could perform and I am happy with my team.”

Commented Hemant on the cast selection and work rate. 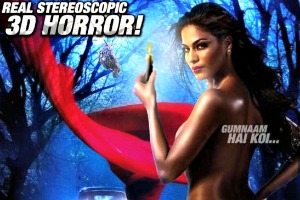 ‘Mumbai 125 km’ makers have also released a promotional video song with a fun Punjabi touch, composed by JSL Singh. The song is titled Ringa Ringa and features the voice of Shalmali Kholgade and Harshit Tomar.

With the star cast on the promotional tour all over India, the audience surely seems to be excited to watch this film and especially, the hot Pakistani actress Veena Malik and the famous TV actor Karanvir Bohra, who has a strong following.

Interestingly, this is the first Veena Malik film to be released after her marriage and transition to family life, including giving birth to adorable baby ‘Abram.’

Komal is a cinéaste, who believes she was born to love films. Apart from working as assistant Director in Bollywood, she finds herself doing photography or watching Simpsons. “All I have in life is my imagination and I love it that way!”
BFI London Film Festival screens Asian cinema
Big B reveals SRK’s naked pics on KBC!