Pakistani actress Veena Malik gave birth to her first child on September 23, 2014. Named Abram Khan Khattak, the newborn boy has already got an active Twitter account in his name with 27,000 followers.

“We have named him Abram Khan Khattak. It is the name of Shahrukh Khan’s son as well."

Actress, singer and all round entertainer, Veena Malik and her husband have welcomed a newborn baby boy into their lives called Abram Khan Khattak.

Born on September 23rd, 2014, in the United States, the adorable child has already created quite a stir in the media world and even has a dedicated Twitter account in his name.

Showing that it is never too early to get started on Twitter, in just 10 days, the account reached 27,000 followers. Little Abram later tweeted: 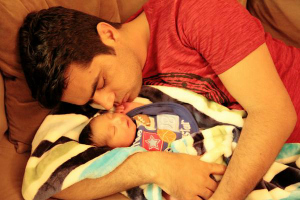 “Thank you everyone for making me feel so special… Just in 10 days i got more then 27K followers on Twitter…!!!”

The besotted parents have also been sharing out pictures and news of their son to the world. Veena tweeted out:

“Alhumdullilah we are blessed with a Baby Boy @iAbramKhan… cute son of Proud father @Asadbashirr.”

The couple who married on December 25th 2013, in Dubai have followed in the footsteps of the Badshah of Bollywood, Shahrukh Khan and also named their son Abram.

SRK’s youngest son was born via surrogacy and the famous father is known to be hugely protective of him. Explaining the name choice, Asad said:

“We have named him Abram Khan Khattak. It is the name of Shahrukh Khan’s son as well. In Hebrew and Arabic, it is Ibrahim.” 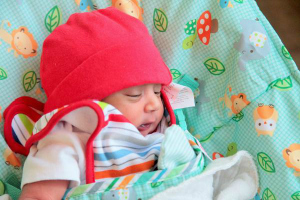 Speaking about his wife, Veena after the birth, Asad added: “She is doing pretty well. We are happy that we are here. She is trying to sleep.”

Known for being a controversial figure, especially in her native country Pakistan, of late the actress has mellowed and has been enjoying her new life in the United States.

Veena has veered away from the limelight since her marriage in 2013, and it is clear that she is keen to be a devoted wife and now mother.

During the peak of her career as an entertainer, Veena was doing everything from acting in Bollywood, releasing albums and starring on Reality TV shows.

Her biggest claim to fame was in the reality show Bigg Boss 4, where she continually hit the headlines with her bold opinions and extremely close relationship with fellow housemate, Ashmit Patel.

Veena also reportedly went nude for the cover of FHM’s India, which she later denied. Her next Bollywood film, Mumbai 125 KM, a 3D film is set to release from October 17, 2014. An Indian horror film, Veena plays the role of a ghost and will star opposite Karanvir Bohra.

The film follows a young group who are travelling on a road trip from Pune, but an accident leaves them stranded 125 kms from Mumbai.

Veena almost became caught in another controversy after a Tweet was posted from a fake Twitter account showing a picture of Indian Prime Minister Narendra Modi with Barack Obama during a state visit to America. The caption in the picture read: “India mein itney bade bade chohey hotay hai” [The mice in India are this big].

With both the baby and mother in good health, the young family is expected to return to Pakistan soon.

Aisha is an editor and a creative writer. Her passions include music, theatre, art and reading. Her motto is “Life is too short, so eat dessert first!”
Haider ~ Review
Shahrukh Khan receives Global Diversity Award