Bollywood superstar Shahrukh Khan has received the Global Diversity Award at the House of Commons. The actor who has been honoured for his humanitarian work adds to his ever-increasing trophy cabinet.

"I will try to do in a small way whatever I can."

Shahrukh Khan was presented with the Global Diversity Award in London’s House Of Commons from the speaker of the House the RT. Hon John Bercow on October 5th, 2014.

In a career that has spanned for over 25 years, SRK has wowed millions of fans worldwide with his stellar performances in countless Bollywood movies.

Within the glamorous world of Bollywood, Shahrukh Khan has seen it all, done it all and won it all, and he shows no sign of stopping.

However SRK is not just known for his on screen antics, he is also working tirelessly outside of cinema and was recognised for his contributions to humanitarian causes across the globe.

Speaking about their choice for the annual Global Diversity Award, Bercow said: “He has already featured in several films and won 14 Filmfare awards out of 30 he was nominated including eight best actor awards.” 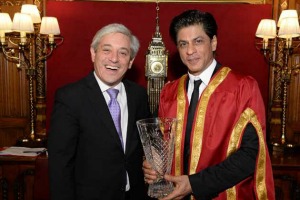 The award recognises not only King Khan’s outstanding work in film but also the philanthropic ventures he has taken part in and given his name to.

Upon receiving this award, Shahrukh said he described this as a ‘big honour’.

The award itself was presented by the Rainbow Foundation, an organisation that works closely with the Next Foundation each year to recognise one individual who has made a major contribution to worldwide diversity.

The RT. Hon Keith Vaz, founder of the Rainbow Foundation highlighted SRK’s work in Bollywood by saying: “Shahrukh Khan is regarded as one of the most famous actors on Planet Earth.”

Bercow heralded his achievement outside of film: “He is also active in the fields of charity, particularly in helping women who have suffered acid attacks.”

SRK expressed his gratitude and appreciation for winning this award saying: “This is a very special day for me and I am very humbled to receive the award instituted by the Rainbow Foundation.”

While this trophy marks an impressive contribution in helping others, SRK is not done yet, and he admitted that he would use this award as encouragement to do more: “I will try to do in a small way whatever I can.”

“My first visit to England was when I was 27 in connection with the first film Baazigar. I have got lot more than I deserved,” Shahrukh added. 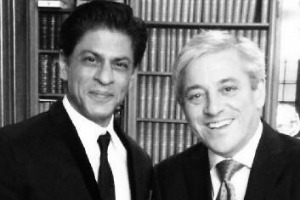 The bollywood star also took to Twitter to thank the two gentlemen at the ceremony: “Now at the Houses of Parliament to receive the Global Diversity Award….humbled & grateful. Thank you.

This award follows a long line of other international awards that the Bollywood superstar has received, including the ‘Chevalier de la Legion d’Honneur’, France’s highest civilian award; ‘Wissam Al Kataa Al Fikra’, Morocco’s highest honour; and the prestigious Malaysian ‘Datuk’ title, which is equal to a British Knighthood.

He even has an rare orchid called the ‘Ascocenda Shahrukh Khan’ in Singapore.

SRK has now joined the likes of other Bollywood heavyweights such as Amitabh Bachchan and Aishwarya Rai who have also received the Global Diversity Award.

This award given to Shahrukh Khan helps indicate the work undertaken by celebrities in order to help those less fortunate and shows their heart is just as big as their popularity.

Khan was recently in London for his SLAM UK concert which took place at the O2 on October 5th, 2014.

Amarjit is a 1st class English Language graduate who enjoys gaming, football, travelling and flexing his creative muscles writing comedy sketches and scripts. His motto is “It’s never too late to be who you might have been” by George Eliot.
Veena Malik gives birth to Baby Abram
SLAM Tour has its Finale in London