SLAM Tour has its Finale in London

The Happy New Year team arrived in London on October 5th, 2014 for their final stop of the SLAM tour. DESIblitz were at the press conference to find out more from Shahrukh Khan, Deepika Padukone and the rest of the star cast.

"It’s difficult yet so rewarding to do a tour like SLAM because of the scale and getting everyone together.”

The Bollywood SLAM tour came to a close on Sunday 5th 2014 but ended with a bang. The last stop, which was London, not only witnessed an incredible turnout but was also touted as one of the biggest world tours Bollywood has seen.

Madhuri and Malaika who are not part of Happy New Year also joined the SLAM tour with some incredible performances: “Back in Mumbai. Thank you London for being such a fantastic audience! Thank you for all the love,” Madhuri later tweeted.

It wasn’t just the crowd that had fun though. The cast too had an incredible experience whilst going on the SLAM tour, they explained excitedly at the press conference in London:

“We had a lot of fun on stage. Everyone’s really comfortable being on stage now. O2 is a wonderful arena. I’ve performed there for the ‘Unforgettables’ tour before with my family. However, now I’ve come with a bigger family!” said Abhishek Bachchan. 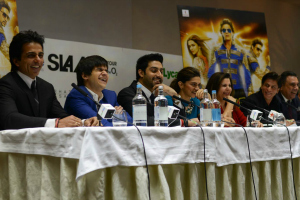 Speaking about the experience of doing Happy New Year and SLAM tour, Shahrukh said: “Everyone has to do a film like Happy New Year in their career, and I am blessed to do this. The worst thing about the end of this tour is that we are going to miss each other the most.”

The key aspect Shahrukh believed differentiated Happy New Year from other films was that:

“The Happy New Year cast was probably one of the most hardworking casts that I’ve worked with. We travelled a lot and we shot for 14-18 hours. It’s difficult yet so rewarding to do a tour like SLAM because of the scale of production, logistics and getting everyone together.”

Vivaan Shah also considered the SLAM tour to be a “life changing experience” and believed: “To represent our country is a huge honour. We’re doing the same in the film, Happy New Year.”

However, with a massive cast and crew of 135, there were some minor hiccups along the journey. Farah Khan confessed that: “At times, a volume of this many people can be difficult to coordinate. When we performed in Chicago, Chicago airport shut down and we were really worried that we wouldn’t make it to our next concert in Vancouver.” 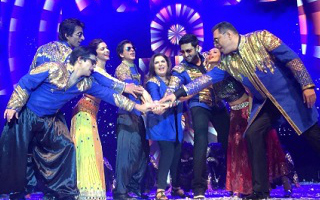 The last stop in the tour was London and for many of the cast, London was a special city. For Boman, it was the London was the first city he had visited outside of London, whilst for Deepika, London was the city where her first film, Om Shanti Om (2007) had premiered.

On having worked with Shahrukh Khan for almost 7 years, Deepika Padukone said: “When you’ve worked with someone it makes the process so much easier. He tells me, if we are doing a particular scene together, he will tell me what to do and I will always trust him. I will never question it.”

Abhishek Bachchan believed: “I feel like every film has its own destiny. You choose a film because of the script, because the character inspires you, me more than others. I chose the film because it has my friends in it, we are in charge of making the process of the film a memorable one.”

Sonu Sood added: “It has been a life changing experience working with Farah. She is the most talented director and no other director is like her and the way she represents her actors. I’m blessed to be a part of Happy New Year and the amazing family that we have made.”

With the SLAM tour finally at an end, the hype around the biggest Bollywood entertainer of 2014, Happy New Year, continues.

With such an incredible star cast and huge production, the film has high expectations, but we are pretty confident that the Badshah of Bollywood, Shahrukh Khan and his team will not disappoint. Happy New Year will release worldwide from October 23, 2014.

Sonika is a full-time medical student, Bollywood enthusiast and lover of life. Her passions are dancing, travelling, radio presenting, writing, fashion and socialising! “Life isn’t measured by the number of breaths taken but by moments that take our breath away.”
Shahrukh Khan receives Global Diversity Award
Nihal and Poppy talk London City Swagger