The Bollywood legend, Dev Anand whose contribution to Indian cinema spanned over five decades passed away whilst on a trip to London. Reactions to his dear loss have been felt by everyone who knew him, his work and most importantly his persona.

"He was an embodiment of long passion for acting and filmmaking"

Dev Anand, often referred to the ‘Evergreen Romantic Superstar,’ passed away in London on 3rd December 2011, following a cardiac arrest at the age of 88. This veteran actor is remembered for his incredible charisma, charm and the will to always play young. He defied those people who used age as an excuse to do things in life.

Dev Anand was in London with his son Sunil Anand visiting for medical check-up because his health was not so good recently. The family say he died of a heart attack at the London hotel where he was staying. 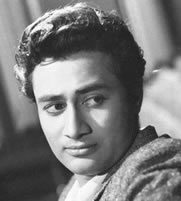 He was born as Dharam Dev Pishori Anand on September 26, 1923, in Shakargarh, Gurdaspur district in Punjab (today known as Narowal district of Pakistan) and was the son of Punjabi lawyer, Pishori Lal Anand. Dev studied and graduated in English Literature and Law, at the Government College, Lahore, in British ruled India.

After graduating, in 1943 Anand left his home town for Bombay, today known as Mumbai, to pursue his love to become an actor in films. Talking about that time Dev Anand said: “I had a little bit of money in my pocket. I arrived in Bombay not knowing anybody there and I struggled for two years. The whole ambition was to be in the movies, to be a star and the leading man.” 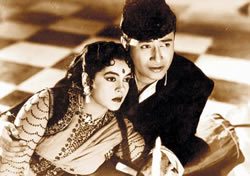 After working in the Military Censor’s Office at Churchgate in Bombay and as a member of his brother’s Indian People Theatre’s Association for two years, Anand was offered his first film role in the Hindi film Hum Ek Hain in 1946 made by Prabhat Films. However, Ziddi in 1947 was Dev Anand’s “big break” in the film industry. It was offered to him by his favorite actor, Ashok Kumar.

Dev Anand was popular for his good looks, melodious voice and success as an actor who played romantic leads very well. Within a few years of his firest movie release, Anand was considered a superstar. 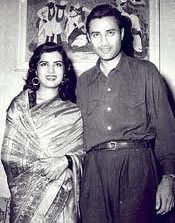 During his early fimling years Anand befriended the actor Guru Dutt and they both helped each other. His first romance was with co-star singer-actress Suraiya. They both appeared opposite each other in the successful films Vidya (1948), Jeet (1949), Shair (1949), Afsar (1950), Nili (1950), Do Sitare (1951) and Sanam (1951). During filming Vidya, Suraiya fell in love with Dev. However, with her being Muslim and Dev being Hindu the relationship was not accepted by her grandmother.

Thereafter, Anand pursued a solo career and went on to become a huge star. The 1950s, 1960s, 1970s, 1980’s, 1990’s and right up to 2005 saw him appear in films in many different guises. In 1954, during the filming of the hit film Taxi Driver, Dev proposed to his heroine Kalpana Kartik and they subsequently married. They then had a son Suneil Anand. Kalpana decided to stop acting after her marriage.

We’ve compiled a small taster of Dev Anand songs to remember this great star, out of many many more hits: 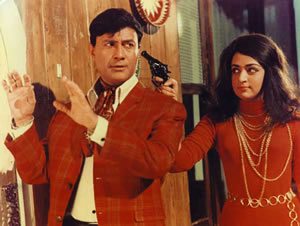 Dev was known for his romance and love for the women and played opposite many different actresses including Nutan, Vaijayantimala, Meena Kumari, Mala Sinha, Sadhana Shivdasani, Asha Parekh, Kalpana, Simi Garewal and Nanda. Notably, a big hit was Guide (1965) which was Dev’s first colour film starring opposite Waheeda Rehman. Then, Johny Mera Naam (1970) which made Hema Malini a huge star opposite Dev Anand.

In 1971, Dev Anand developed a taste for directing with Hare Rama Hare Krishna, which was about the popular hippie culture of the time, featuring his newly found actress, Zeenat Aman, who played the mini-skirt wearing, pot-smoking Janice. 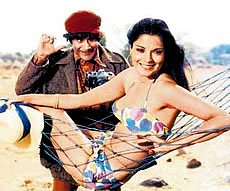 Despite being in his fifties, Dev Anand was still happy to play roles opposite young actresses, including Tina Munim, Rakhee, Parveen Babi and Zeenat Aman, and this characterised his image as the evergreen star.

Dev Anand directed 19 films and produced 31 films of which 7 directorial ventures and 18 films respectively were commercially successful at the box office. He wrote the story for 13 of his films. Critics say his directorial ventures have always been ahead of their time. Dev Anand’s films were always well known for their hit songs.

Dev was known for his support and encouragement for new talent. He discovered actresses like Zeenat aman and Tina Munim; he gave actors like Shatrughan Sinha his first break in Prem Pujari; Jackie Shroff in Swami Dada and Tabu in Hum Naujawan. 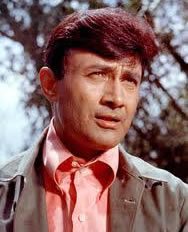 Anand always showed versatility and a was of a forward thinking nature despite his age. He said: “All the films I made were very modern and ahead of their time, including Guide.” In September 2007, Dev’s own autobiography “Romancing with Life” was released at a birthday party with the Indian Prime Minister Dr. Manmohan Singh. In February 2011, his 1961 black and white film Hum Dono was digitised and released in colour.

The reaction to Dev Anand’s death has been tremendous from the Bollywood film fraternity and beyond.

Bollywood actress Padmini Kholapuri was introduced to Dev Anand by legendary playback singer Asha Bhonsle. Padmini who was very fond of him said:”I’m going to miss him a lot because he’s been a great influence in my life in my career. I was very fortunate to have worked with him and to have met with him.” She added:

Prime Minister Manmohan Singh of India said in a statement: “Dev Anand was a great artist who entertained generations of cinema lovers over five decades. He was an embodiment of long passion for acting and filmmaking. I join millions of his fans in mourning his death.”

On Twitter Bollywood stars reacted with remembrance and affectionate tweets for Dev Anand.

Amitabh Bachchan – “Just reading news about Dev Saheb .. praying it is not true ! He was such a positive person .. never associated death with him ..”

Shahrukh Khan – “Dev sahib’s sad demise makes me feel that the film industry is incomplete & has lost its magical energy. May Allah bless his soul”

Priyanka Chopra – “Thank you Dev sahib… For being u and leaving us with ur incredible legacy…u shall be missed… RIP..”

Akshay Kumar – “One of the worst years so far, evergreen romantic actor/director Dev Anand Saab, the one who romanced with life is no more, but he dies young. How many of us will have that privilege? For me Life = Dev Anand! My condolences to his family members. RIP Dev Anand Saab”

Priety Zinta – “Woke up to the sad News of Dev Saheb’s demise ! May God give peace to his soul ! He inspired us all by living his life 2 the fullest . R.I.P”

Dev Anand was a very unique icon in Bollywood who had a tremendous career in the industry and was always known for discovering new talents. Today, he was known as a filmmaker still with the huge hunger to make new films. Now, leaving us with a superb legacy of films, songs and performance which will remain totally evergreen, like the person himself.

Nazhat is an ambitious 'Desi' woman with interests in news and lifestyle. As a writer with a determined journalistic flair, she firmly believes in the motto "an investment in knowledge pays the best interest," by Benjamin Franklin.
Pakistan bans The Dirty Picture
Veena Malik sues FHM India