The Bollywood film fraternity has lost it’s first superstar – Rajesh Khanna. The actor known for his iconic nod of his head, emotional acting and a charismatic presence leaves a legacy of hit films and songs in his name.

"He was the powerhouse of Hindi film industry"

Bollywood’s first superstar passed away on Wednesday 18th July 2012. Rajesh Khanna, the heart-throb from the mid 60’s and 70’s, died at his residence Aashirwad in Mumbai, at the age of 69, after battling a prolonged illness.

Since April, Rajesh Khanna’s health deteriorated and stopped eating and complained of feeling very weak. After being admitted twice to Lilavati Hospital, he was discharged from hospital on Tuesday. However, low blood pressure and major weakness resulted him going onto a ventilator.

It’s reported his illness was related to liver problems. He passed away in the presence of his wife Dimple Kapadia, daughters Rinkie and Twinkle, son-in-law Akshay Kumar, grand children and close relatives.

Akshay Kumar, broke the news to reporters saying: “I have come to inform you that my father-in-law Rajesh Khanna is no more with us.”

Born in Amritsar on 29 December 1942, Khanna was an adopted and raised by foster parents who were relatives of his biological parents. He was known as ‘Kaka’ (Uncle) to his friends and his wife. 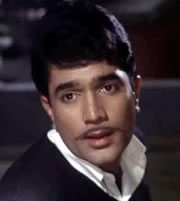 Rajesh Khanna made his debut in 1966 in Aakhri Khat directed by Chetan Anand, after winning the 1965 All India Talent Contest. He subsequently shot to stardom and became Indian cinema’s first true superstar. 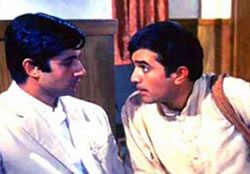 One notable film was Anand made in 1971 featuring Rajesh Khanna as Anand Sehgal, a cancer (lymphosarcoma of the intestine) patient who moved to Bombay to live life to the fullest in his final days.

In contrast in the film, he meets Dr Bhaskar Banerjee, played by Amitabh Bachchan, who tries to explain the stark reality of his illness but Anand wins him over by showing how a terminally ill man can still spread happiness and help others, despite the his own destined outcome. This inspires Banerjee to write and narrate a book about Anand’s life in the film.

Khanna was known for his charisma, emotions, charm, elegance and heroics on the screen. Especially during his peak from about 1969 to 1975, he was a huge icon amongst female fans, women would go to extremes to get a glimpse of him, lines of them would wait outside his home, mark his car with lipstick and even send letters to him written in blood.

Monojit Lahiri a flim critic from the time remembers: “Girls married themselves to photographs of Rajesh Khanna, cutting their fingers and applying the blood as sindoor.” 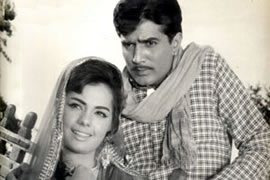 At his peak, Khanna delivered 15 solo hits one after the other between 1969 to 1971, a record which no other Bollywood actor has ever achieved so far.

Rajesh Khanna was the last superstar to set fashion trends. The trend of wearing guru kurtas and belt on shirts became famous in 70s and 80s because of Khanna. 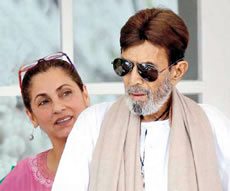 In his personal life, Khanna was in a relationship for seven years with the fashion designer and actress Anju Mahendru between the late 1960s and early 1970s. Then, in March 1973, Khanna married Dimple Kapadia, six months before her debut film Bobby released. They had two daughters and the marriage ended in separation in 1984. In the 1980s Tina Munim and Rajesh Khanna became the leading on and off screen couple. However, Dimple and Rajesh Khanna developed a mutual understanding, where Dimple looked after him right up to his demise. 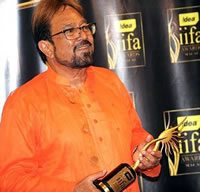 Rajesh Khanna was awarded the Lifetime Achievement Award at the International Indian Film Academy (IIFA) awards in Macau in 2009.

The Bollywood fraternity has been shocked by the sad news about Rajesh Khanna and has reacted non-stop on Social Media and tributes have flowed on media and in the press.

For Bollywood’s first superstar, many of the fraternity’s film directors and actors, several of whom were associated with Khanna, came together to play glowing tributes to the 69-year-old actor and said his name will be written in “golden words.”

Amitabh Bachchan who worked with Khanna in two films tweeted:

“The word ‘superstar’ was invented for him, and for me it shall ever remain his, and no others .. !!” 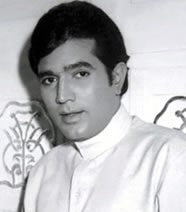 Shahukh Khan, a huge admirer of Rajesh Khanna tweeted: “To live with intention and walk to the edge. Play with abandon, choose with no regret. Smile and made us do the same. Sir, you defined our era. Whenever life felt tough u made us feel how love could change it all. RIP,” SRK tweeted.

Filmmaker Subhash Ghai said: “He was the powerhouse of Hindi film industry. I met him on the sets of aaradhna, he had some kind of energy and you will be charged when he is around you. His name will be written in golden words.”

Karan Johar tweeted: “The magic…the mannerism…the mania of RAJESH KHANNA is inscribed in every archive of indian cinema…forever….RIP SIR!!!”

A tweet from India’s Prime Minister, Manmohan Singh said: “I convey my heartfelt condolences to the members of the bereaved family and countless fans and admirers of Rajesh Khanna.”

In a special message, Prime Minister Ashraf of Pakistan conveyed his condolences. He said Khanna was “a great actor whose contribution to the field of films and arts would be long remembered.”

Bollywood has lost yet another big name from its roster of actors that highly contributed to the foundations of the Indian cinema. Rajesh Khanna will be constantly remembered for his roles, the songs and mostly for an actor who provided us with an era of films that will be evergreen.

Amit enjoys creative challenges and uses writing as a tool for revelation. He has major interest in news, current affairs, trends and cinema. He likes the quote: "Nothing in fine print is ever good news."
Tribute to Strong Man Dara Singh
Saif Ali Khan’s Cocktail is a hit