Actor and wrestler Dara Singh passed away on 12th July 2012, introducing another great loss to Bollywood. We pay tribute to this Bollywood Action King’.

" With a good diet and a strict fitness regime, he was always a man on a mission."

Sad news spread amongst the Bollywood fraternity on July 12th when it found out about the demise of the actor, strong man and wrestler, Dara Singh.

After suffering a heart attack on Saturday 7th July and being at Mumbai’s Kokilaben Dhirubhai Ambani Hospital, Dara Singh lost his battle with life and passed away at 7.30am in the morning.

Many of the new generations of Bollywood film lovers perhaps will not be so acquainted with this ‘humble giant’ that became a known actor for his great display of natural body building and masculinity in the early days of film making. Very different from the six packs and ripped bodies on display in Bollywood using today all sorts of supplements and methods to look the part.

Dara Singh was 83 years old when he passed away. As an adult he stood 6’2″ tall, weighed 132Kg and had a chest measurement of 54 inches, he was in a way, India’s own Schwarzenegger. 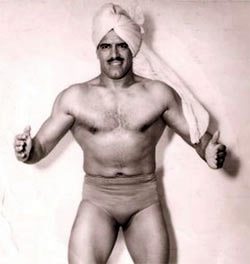 Dara was born into a Jat Sikh family on the 19th November 1928 in the village of Dharmuchak, Punjab, India. As a youngster he worked on a farm and trained in Pelwani (A form of wrestling which originated from South Asia) to get a much better physique. This including simple but effective forms of exercise including hundreds of squats (dand-bhetka) and doing reps using rocks and home-made weights for enhancing strength.

Pelwani is a slow form of wrestling which involves stamina, real strength and technique to beat the opponent. Very far from the cosmetic WWF and staged fights we see today on television.

Diet was an important aspect of Dara Singh’s approach to building strength for Pelwani and back in his day, natural foods were seen as the best way of enhancing your physique. These included having regular intake of milk, ghee, chickpeas, almonds, ‘malay’ (skin from the top of milk), fresh vegetables, and fruits such as apples, wood-apples, bananas, figs, pomegranates, gooseberries, lemons, and watermelons. 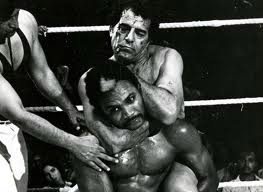 Dara’s cousin and next-door neighbour from the village of Dharmuchak, Darbara Singh aged 70, worked in 10-12 films and learnt wrestling from Dara Singh. He said: “He was a great inspiration. Ever since childhood, he liked to be fit and healthy. With a good diet and a strict fitness regime, he was always a man on a mission.” 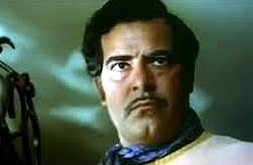 Dara Singh entered the film industry in 1952 with Sangdil. He was known as the ‘Action King of Bollywood’ and was successful as an action hero during 1960-69 in Hindi Films and in Punjabi films between 1970-82. He appeared in over 120 Hindi feature films and in about 21 Punjabi films.

In 1970, he turned a producer, director and writer when he made the Punjab film, Nanak Dukhiya Sub Sansar, which was a huge hit. He also directed the hit film Mera Desh Mera Dharam in 1973, which starred superstar Raj Kapoor. The story of the film was about the history of heroes who sacrificed their lives for the people and the nation.

Salman Khan has the trend of taking his shirt off in films and other actors like John Abraham, SRK and Shahid Kapoor to show their bodies off. But not many people know that the first person to start this trend was actually Dara Singh who had eight-pack abs. 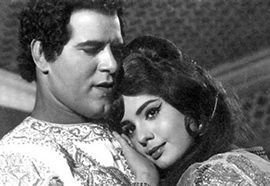 Veteran Bollywood actress Mumtaz acted in over 16 films with Dara Singh and he believed she was one of his most valuable finds for the Indian film industry. Films included, Faulad, Veer Bhimsen, Samson, Hercules, Tarzan Comes to Delhi, Boxer and Daku Mangal Singh.

One of his most famous movie roles was in 1985 when he starred in the hit film Mard which was directed by Manmohan Desai which also starred Amitabh Bachchan and Amrita Singh. In this hit film he portrayed the role as Amitabh’s father and got a lot of praise for that film. 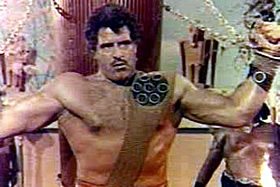 When Manmohan Desai signed Dara Singh for Mard, the director said: “Amitabh Bachchan is playing the title role of Mard. I was wondering who could be his father… If Amitabh plays Mard, then his father can be Dara Singh only. This is why I took Dara Singh in the film.”

More recent appearance included his role in Kal Ho Naa Ho as Sharukh Khan’s uncle who took him in when Sharukh’s character moved to America. Dara Singh’s role in that film was not substantial, however it left an impact with the audience and brought a smile on everyone’s faces.

He was last seen in the 2007 Bollywood blockbuster, Jab We Met and his last Punjabi movie released before his illness was Dil Apna Punjabi.

As well as acting in films and wrestling, Dara Singh also established a film studio called Dara Studio in 1978, based in Mohali, Punjab. 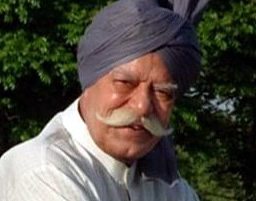 After films, he next went into starring in TV roles and was most famous for his role as Hanuman in the Hindu Epics Mahabharat and Ramayan. He received a lot of critical acclaim for this role. Dara Singh was the first sportsman to be nominated to the Rajya Sabha by the Bhartiya Janata Party during August 2003 till August 2009.

The majority of the Bollywood industry tweeted their shock and sorrow after hearing the news of Dara Singh:

Amitabh Bachchan: ‘Dara Singh ji passed away this morning. A great Indian and one of the finest humans..An entire era of his celebrated presence gone !’

Shah Rukh Khan: ‘Wrestlers r made of sweat,determination & a hard to find alloy called guts…most apt for Dara Singhji our very own Superman.Will miss u sir’

‘Dara Singh ji was LARGER than life but never made anyone feel dwarfed with his presence. The strongest and the humblest. A Hero All The Way.’

Abhishek Bachchan: ‘Dada ji passes away. Had the honour of working with him in Shararat. The most gentle and kind man. Really looked up to him. Will miss him.’

Akshay Kumar: ‘Sad to know the great Dara Singh ji is no more. Some more goodness taken away from us… He was Hanuman for every kid and the God of all wrestlers, the original action hero who truly inspired me. May his soul rest in peace’

Shahid Kapoor: ‘RIP dara sigh ji ……. Was a privilege to have known him and worked with him’

In his personal life, Dara Singh married twice. He has a son, Parduman Singh Randhawa, from his first marriage and from his second marriage he had five children: two sons and three daughters including Vindu Dara Singh, who is a film and television actor.

Dara Singh was one member of the Indian film fraternity who made an impact on all generations and he will be deeply and fondly remembered and missed.

Amit enjoys creative challenges and uses writing as a tool for revelation. He has major interest in news, current affairs, trends and cinema. He likes the quote: "Nothing in fine print is ever good news."
Tooting Broadway ~ a Tamil Thriller
Bollywood loses superstar Rajesh Khanna