Bollywood star Himesh Reshammiya brings the house down with his musical mashup and Salman Khan reprimands the celebrity contestants on Bigg Boss 10.

As the fourth week of Bigg Boss 10 comes to a close, the environment in the house has undergone a change with Bigg Boss demolishing the master/servant rule and celebrities and Indiawale getting equal footing.

And, after a week full of sacrifices and unending disputes, the housemates get the week’s round up from megastar and Bigg Boss 10 host Salman Khan.

At the beginning of the day, the contestants receive a musical surprise as the multi-talented singer and composer, Himesh Reshammiya enters the house singing his popular number ‘Hookah Bar’.

Pepping up the environment, Himesh asks the housemates to join in for a quick musical session. Before making an exit, Hamish launches his new album Aap Se Mausiiquii by performing its title track.

Salman Khan kickstarts the episode congratulating the housemates on the merger.

However, he further reprimands them for putting up a poor show throughout the week and failing to entertain the audience.

Salman reveals that how some of the contestants are not taking the show seriously and are often spotted lazing around inside the house thereby bringing down the entertainment value of the show.

He shows a video of Rahul, Rohan and Karan tucked into their beds for the entire day. He also points out that celebrities are just lurking inside the house showing no excitement while performing the tasks.

Salman asks them to pull up their socks and show some enthusiasm. Adding some fun to the seriousness, Salman compliments Manveer for his new look saying: “It’s good that you shaved your beard as the audience will finally get to see your real face.” 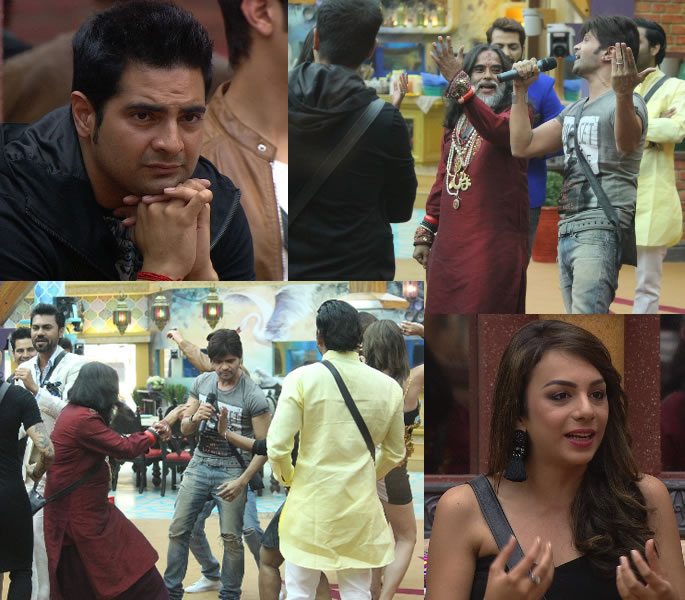 Talking about nominations, Salman questions Nitibha for not giving up on her makeup to save Navin. When Nitibha tries to provide a justification, Salman tells her that she did it intentionally as she didn’t wish to save Navin in the first place.

In her defence, Nitibha says that she feels uncomfortable without makeup and additionally she wanted to save Lokesh from being evicted.

Clearing out the miscommunication that leads to Lokesh’s nomination, Salman shows a video to explain what Bigg Boss exactly told Karan in the phone booth task and what he actually interpreted.

After looking at the video Salman questions Karan that if it would be fair if Lokesh gets evicted this week. Guilty about his actions, Karan tells Salman that he misunderstood the whole thing and would feel terrible if Lokesh gets eliminated.

Amidst all the Hungama a million dollar question still remains.

Which contestant will get evicted from the Bigg Boss House in week four?

Mariya is a cheerful person. She is very passionate about fashion and writing. She also enjoys listening to music and dancing. Her motto in life is, "Spread happiness."
Ranbir Kapoor finds Sexting Boring and Prefers Flirting!
Navin Prakash gets Evicted from the Bigg Boss House