Abhishek Sharma entertains with The Shaukeens

"Abhishek is as mad as I am, especially where the humour is concerned."

Directed by Abhishek Sharma, The Shaukeens is a remake of the 1982 film Shaukeen.

Starring Annu Kapoor as KD, Piyush Mishra as Pinky and Anupam Kher as Lalique, the trio are trying to relive their youth.

These flirtatious middle aged men come across the beautiful Ahana (played by Lisa Hayden) and the story revolves around them trying to woo the young lady.

The Shaukeens is a safe but cheeky film that will serve as a light entertainer. The film is shot in Delhi and Mauritius. Lali is a sad married man and the other two are widowers. 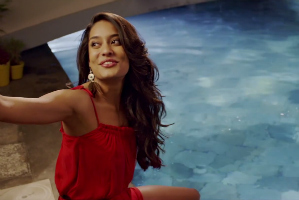 They are so desperate to relive their youth or anything they have missed out on that they go to Mauritius. They end up staying in a Villa owned by Lisa Haydon and their hopes and dreams begin again.

The film also has Abhishek Bachchan and Kareena Kapoor in a special on screen appearance. Akshay Kumar is also seen in a cameo appearance as an alcoholic superstar.

As Sharma explains his choice of Junior Bachchan saying: “Because I liked his performance in Happy New Year. On a serious note, Akshay Kumar is playing himself, so people who are related to him do come in somewhere in his world. That’s why Abhishek, Kareena Kapoor and Sunil Shetty have also been featured.”

Speaking about his role, Akshay says: “I’m doing a special appearance in the film. What made the experience interesting was the fact that Abhishek [Sharma] is as mad as I am, especially where the humour is concerned. That’s why we had so much fun during the shoot.” 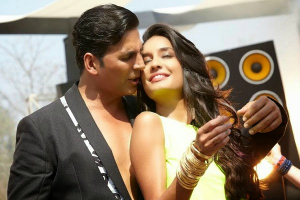 Akshay Kumar being the daredevil stunt lover decided to do his stunts again in this film. He performed a scene where he and Lisa Haydon had to sit on a couch, which would be attached to a helicopter as it flew over the sea.

However, the Mauritian authorities denied permission to shoot the scene. Eventually they shot that scene in Cape Town in South Africa instead without any safety cables. Daredevil at his best!

Before the filming of the movie Abhishek Sharma held workshops with the leading men and Lisa Hayden. This was primarily important for Lisa to be able to speak in Hindi fluently.

Rati Agnihotri (the original lead of the 1982 Shaukeen) who is also part of this film has a firm admirer in Lisa Haydon who says she loved working with her: “Rati Agnihotri was fantastic in the [1982] film. I completely loved her.”

Lisa Haydon who was last seen in Queen (2014) added: “I am extremely excited about the movie. Working with the veterans was super fun.”

“I am enjoying the fact that the humour in this comedy is very self-deprecating. Every actor has made a great effort to laugh at himself,” she said.

Speaking about the three veteran actors and their characters, Akshay says:

“Anupam Kher owns a shoe store and his only dream is to see a girl in Bikini, Piyush Mishra is a cheap guy who just has a wish to touch a hot girl whereas Annu Kapoor has a completely entertaining character where he owns a NGO just for girls.

“This is not a cheap film, it is a cute film. When you watch the film you will get to know what I am mean.”

“I am a versatile director. The only binding factor in my films is the comic element. Comedy has many sub-genres. Like Tere Bin Laden was a satire, the sequel will be a farce and The Shaukeens is a coming-of-age comedy. They are all different genres of comedy and that’s where my versatility lies,” Sharma says.

Anupam adds: “While others make films with young heroes, here’s a movie with senior actors as protagonists. And the entertainment quotient is just as much, if not more.

“There are no sexual innuendoes in the film. It is not a sex comedy, or else, it would have taken away from the innocence and humour. During the shooting, we kept telling Lisa, ‘Please don’t get us wrong when we look at your legs.’ We left the leaching for the camera rather than off it.”

Music wise, it has the famous Yo Yo Honey Singh who provides the music for Akshay’s ‘Alcoholic’ hit track. Honey Singh has worked with Akshay in the past and when he was requested to sing one song for the film he decided to offer three songs for the film. The number ‘Alcoholic’ is especially for AK’s character ‘Alcoholic Akshay Kumar’.

The irony behind portraying Akshay as an alcoholic was quite deliberate Sharma explains: “Tigmanshu and I just wanted to give Akshay a quirk. He plays himself in the film but there is also a fictional side. We featured the song ‘Alcoholic’ on him because everyone knows he’s a teetotaler. The contrast is funny.”

The album itself is a mix of good and average. ‘Manali Trance’ actually gets you in a serious trance.

The Shaukeens promises to be a family film with no double meaning. It is meant to be a light hearted entertainer. The film released from November 7, 2014.

After a short stunt on stage, Archana decided to spend some quality time with her family. Creativity accompanied with an aptitude to connect to others got her to write. Her self motto is: “Humour, humanity and love is what we all need.”
Jaya Bachchan insults SRK?
10 Juicy Details about Arpita Khan’s Wedding