Photographer Mahesh Balasubramanian and the People of India

Mahesh Balasubramanian is loved for his street and travel photography. DESIblitz explores how he captures the people of India in his work.

"This shot is close to my heart."

Mahesh Balasubramanian is an Indian photographer from Chennai. His street and travel photography beautifully captures the people of India.

Though much of his work is based in close proximity to his hometown, he also photographs his travels throughout the country.

His images range from travels to the beach, to observations of a festival, to even the use of bicycles, to name a few.

The style of his work is also varied. Some images are bright and colourful while others are in black and white.

The type of photographs he captures vary too. He switches between the use of film and digital photography.

In this piece, DESIblitz will explore exactly how Mahesh Balasubramanian portrays the people of India. 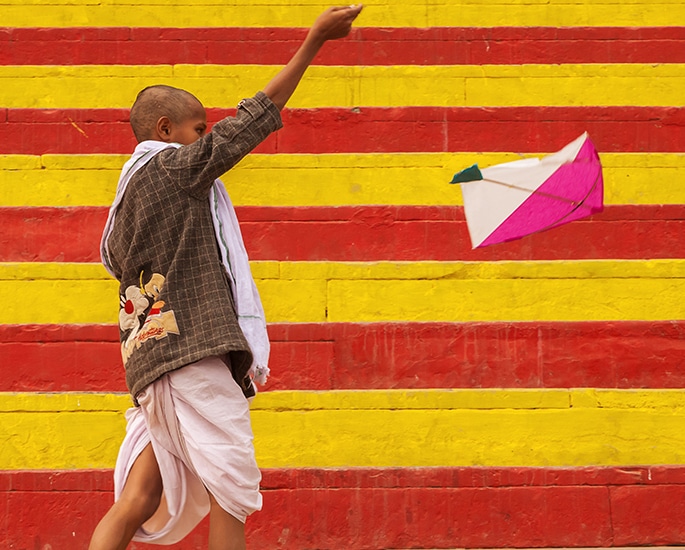 Full of energy, full of colour, and full of sound. That is what Mahesh Balasubramanian captures in so many of his images.

The vibrancy of the people of India is beautifully shown in so many of his photographs. Two of our favourites are shown here.

Beginning with vibrant colours, we have this image of a boy walking with his kite.

This piece ironically is from a series entitled “Minimal”, but the colours in this piece are anything but minimal.

The colours here are so bright and intense. The vivid yellow and red create a wonderfully vibrant image.

It shows Indian people living amongst vibrancy. The bold colours give life to the photograph. 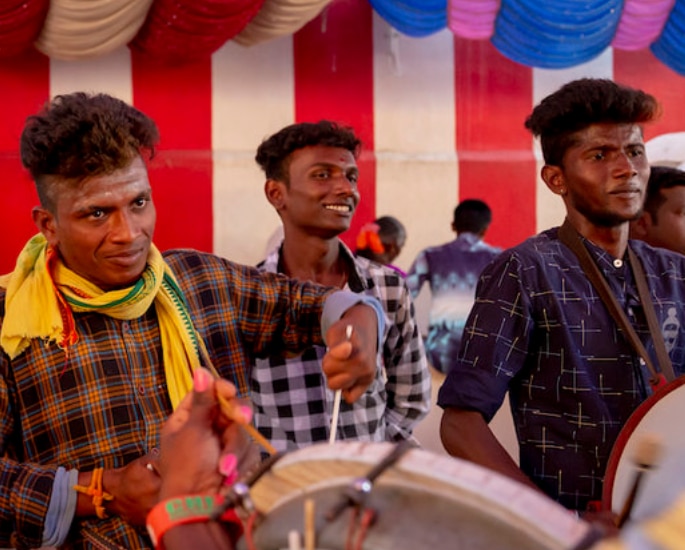 The second image shows intense energy and sound. A group of men are happily playing the drums and are surrounded by smiles and colour.

Even the ceiling of the tent-like building they are in is beautifully decorated with contrasting colours.

When looking at this image, it hard to imagine the people of India being anything but vibrant and energetic. 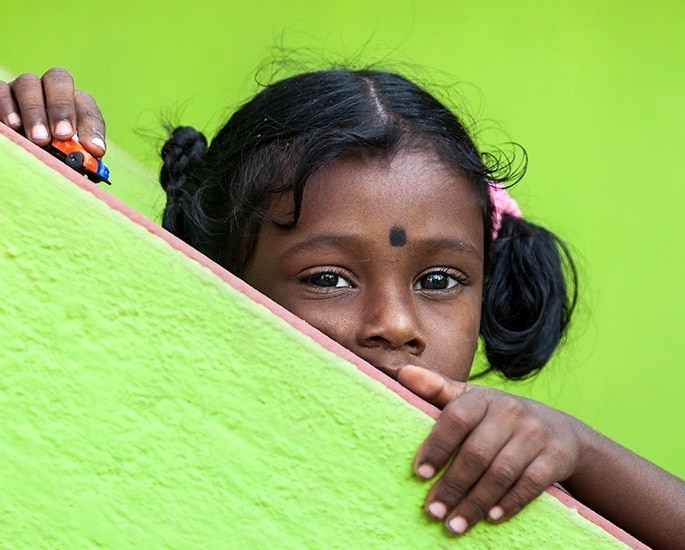 A common theme throughout the various series produced by Mahesh Balasubramanian is the depiction of Indian youth. Therefore there are many images to choose from, but two of the best are provided here.

The first photograph that showcases the youth of India is this beautiful image. It is taken from Balasubramanian’s series entitled “Travel Portraits”.

These images were taken throughout India, from various locations such as Varanasi, Kolkata and Agra.

On Balasubramanian’s website, he states his motivation for this series. Explaining that he aims to capture the heart and soul of his subjects through his photography, he asserts:

“It is my goal to make portraits which will connect the viewers and the subjects directly.”

This image is so striking thanks to Balasubramanian’s impressive use of colour. The green and the pink compliment each other wonderfully, but more compelling is the playful expression of the young girl.

The young girl is caught in the middle of playing with her toy car. Her look is completed by unruly hair and a curious peek from the safety of her staircase.

This image portrays Indian youth as playful and fun-loving. 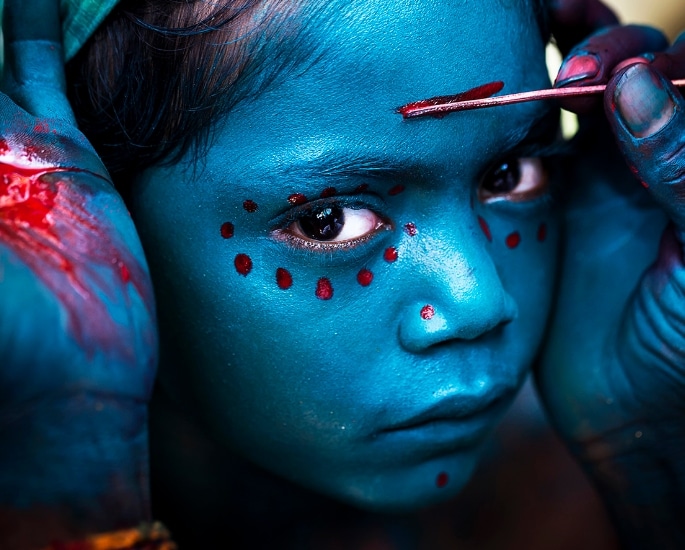 This photograph is one of Balasubramanian’s most famous images. It has won numerous awards including the National Geographic Traveler Photo Contest of 2014.

The image was captured during a festival in Kaveripattinam, a small village in Southern India.

The first thing that strikes the viewer here is the vivid blue. It is even more vivid when juxtaposed against the red paint.

In an interview for the travel magazine Wanderlust, Balasubramanian discusses this prized image of his.

He explains how he travelled to Kaveripattinam specifically for the annual festival and was very pleased to capture this scene. In his interview with Wanderlust he asserts:

“I took several shots at different angles but this shot is close to my heart.”

He later goes on to explain that he was so pleased with this image because it is very compelling. He states:

“This particular picture is what I wanted. I felt it has everything to convey to the viewers.”

The compelling nature of this image cannot be ignored. The young boy’s expression invites viewers to wonder what he is thinking.

He seems to be very aware of the photographer and perhaps confused as to why the camera is focused on him.

He mixes childhood innocence (face paints and celebrations) with growing distrust and self-awareness (a critical eye for those who are watching.) 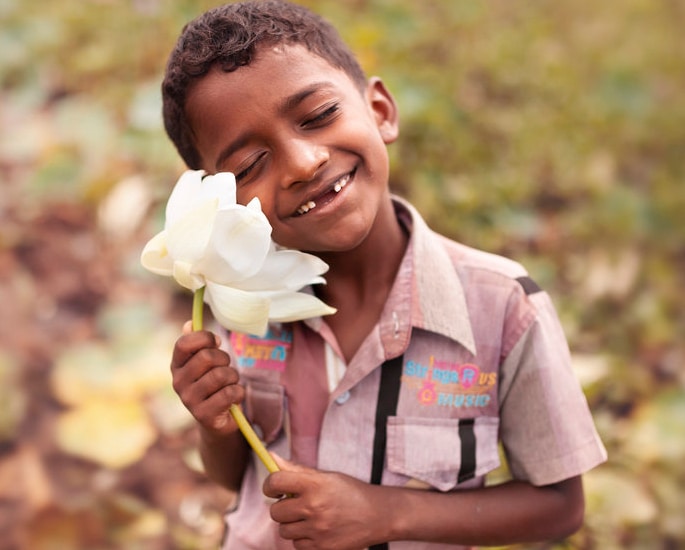 Some of Balasubramanian’s most beautiful photographs are those which show happiness.

His depictions of happiness in India vary across all age groups and walks of life. Two of our favourites, however, are from a young boy and a young girl.

His eyes are closed with a content smile, and he seems to be totally at peace with himself and the world around him. 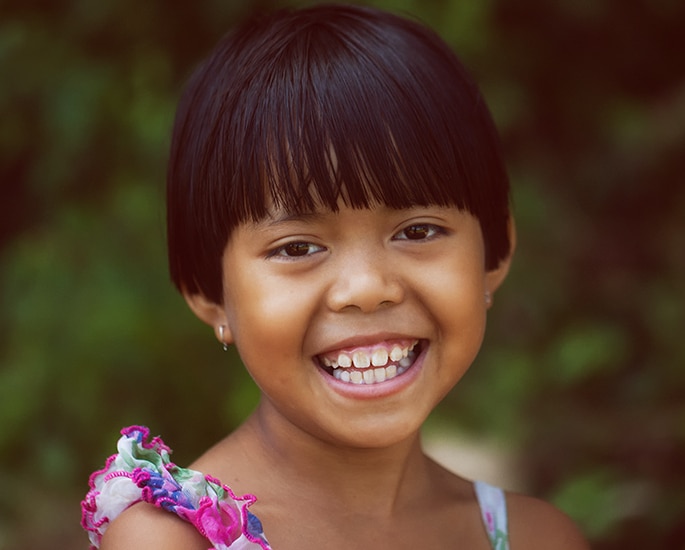 In another image, Balasubramanian shows a young girl laughing. She is surrounded by beautiful nature in the background, but all the focus is on her face.

In addition, the colours of this image compliment each other beautifully. In particular the pink of the girl’s dress with the green foliage behind her.

More noticeable, however, is how happy this young girl is. She seems totally happy to have her photo taken and gives no impression that she is posing. She seems naturally content and full of joy.

These images portray the people of India as content and ready to laugh at any moment.

Balasubramanian portrays a population that is happy, at ease and light-hearted. 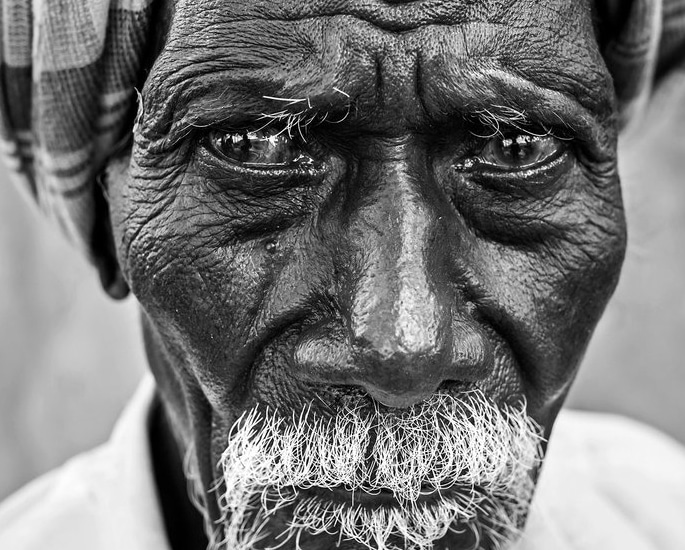 Mahesh Balasubramanian contrasts this depiction of the happiness of Indian people with their concern. A selection of his images convey a population that is worrisome and alarmed.

Two images that portray this are presented here.

The first is a black and white portrait of an elder. He is clearly expressing concern in this image, shown by his furrowed brow and by his eyes that seem stressed.

In fact, if we look closely, we can see that one of his eyes isn’t even facing the camera.

He is clearly concerned about something else, his mind is elsewhere. 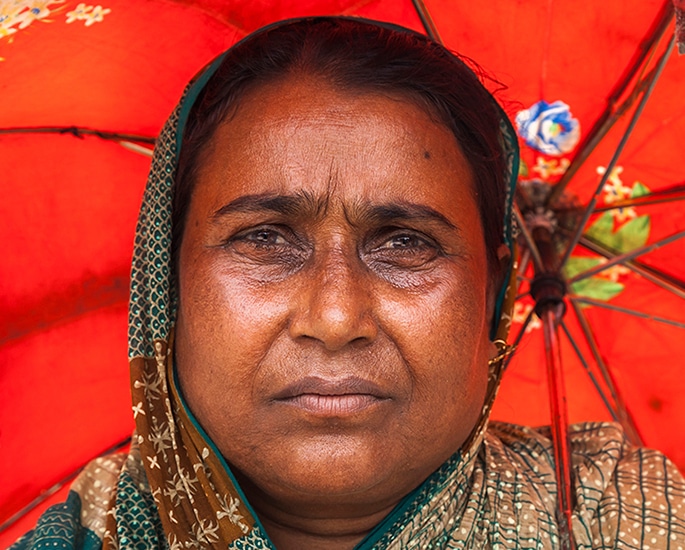 In the second image, we can see a woman holding up a red umbrella as she looks into the camera.

She too expresses concern in her eyes and brows. Even her mouth appears to be tense and bridging towards sadness.

The image itself is beautiful, her vivid red umbrella contrasts perfectly with her green saree.

Her facial expression, however, suggests that her mind is troubled and concerned.

These images show that even in front of a camera, where it is easy to pose and hide emotion, concern shines through.

The people of India, like everyone else, cannot help but express concern and worry from time to time. Balasubramanian captures this brilliantly. 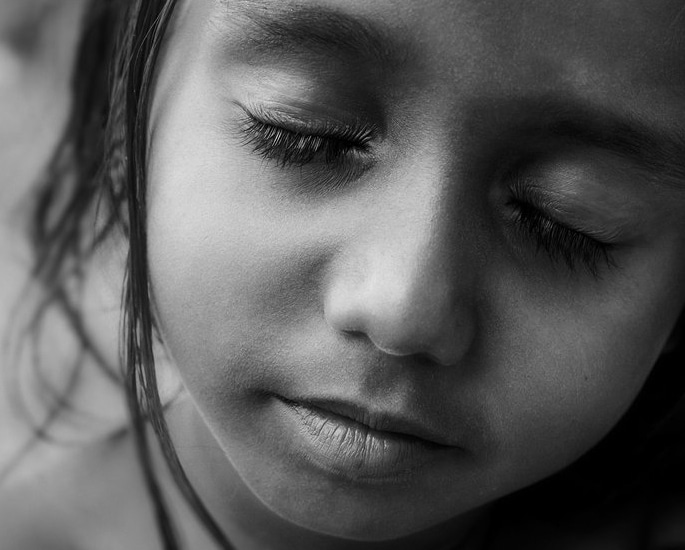 Up next is how Mahesh Balasubramanian portrays the peace of the Indian people.

Two images that convey this in a beautiful way are shown here. The first shows a young girl. Her eyes are closed and she has a calm, relaxed expression.

The young Indian girl appears to be totally at peace. It is hard to imagine that there is any noise, let alone any stress surrounding her.

This image of Balasubramanian’s invites us to stop for a moment and share this tranquil state of mind. 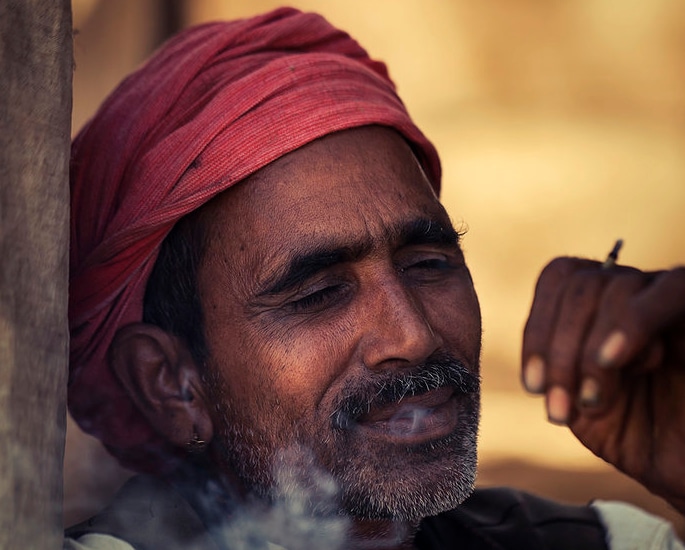 The second image is one of an older man. He is comfortably sat outside, smoking.

His posture shows how comfortable he is, and he is smiling calmly as he blows out smoke. His hand, like the rest of his body, is unclenched and relaxed.

This man appears to be so at peace. He is in no rush and is totally tranquil.

These images show the people of India as individuals who know how to relax and zone out of the busy world around them.

Photographs like this remind us how to take a breath, enjoy the moment, and find peace.

The photographs of Mahesh Balasubramanian are diverse and ranging in styles, but they are all beautiful and thought-provoking.

He brilliantly captures a varied depiction of the people of India, showcasing a multitude of emotions and lifestyles.

Ciara is a Liberal Arts graduate who loves to read, write, and travel. She’s interested in history, migration and international relations. Her hobbies include photography and making the perfect iced coffee. Her motto is “stay curious.”
Venice Preserved: Sex, Tragedy and Rocky Politics
‘Healed’: Manisha Koirala at Jaipur Literature Festival 2019