A 3-year-old Indian girl is in a critical condition after she was raped by her neighbour in Delhi on the anniversary of the 2012 attack on a bus.

"She is bleeding profusely and is [very] critical."

An Indian girl, aged three, from Bindapur, Delhi, was raped by her neighbour on Sunday, December 16, 2018.

The young girl was found unconscious after the sexually abusive attack, which was described as “brutal”. She was taken to hospital for emergency treatment.

It was heard that the perpetrator is a security guard, aged 40, who lived and worked in the building where the girl lived with her family.

The child, who was alone as her parents were away at work, was lured into the man’s home by promising her sweets.

When her parents returned home, they realised their daughter was missing. They began searching for her with the help of locals.

The young girl was found at the man’s house and bleeding profusely. Blood stains were also found on his clothes.

It was heard that locals accused him of raping the girl and started beating him.

Police received a call regarding the incident in Bindapur. Upon arriving at the location, both the accused and the victim were found unconscious.

The girl was taken to hospital while the man was treated for minor injuries before being arrested.

At the hospital, an official said: “The girl has sustained injuries on her private parts. She is stable now, and is being taken to the operation theatre for further examination.”

Delhi women’s commissioner Swati Maliwal travelled to the hospital where the victim was being treated. She disputed claims that the girl was in a stable condition.

She said: “She is bleeding profusely and is [very] critical.

“I am sitting outside the operation theatre and have just spoken to the doctors. The child is battling for her life.”

Police have registered a case against the man under the Protection of Children from Sexual Offenses (POSCO) Act. This could see the death penalty handed out to the security guard.

It is still unclear whether the girl’s condition has improved or whether she will survive the attack. 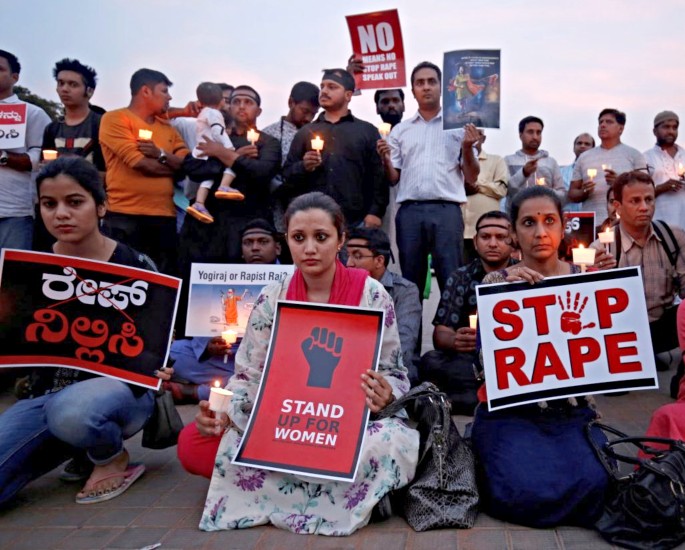 The attack came on the sixth anniversary of a brutal gang rape on a bus in Delhi which left India reeling.

It was an incident which put the safety of India’s women and girls under the spotlight.

A student was travelling with a friend on a private bus on their way home from the cinema. The young woman was attacked by all six other men on the bus, including the driver. Her friend was also beaten by them.

She was beaten with an iron bar, raped while unconscious and thrown from the bus naked.

She died 13 days later from her injuries.

The young woman, known as Nirbhaya which means “fearless”, was the name given by activists and local media as her true identity was protected under Indian law.

It was a case which received such widespread condemnation and forced India to change its legislation on rape.

There was a dramatic increase in awareness of rapes and sexual assaults against women and led to a number of legal reforms including death sentences for those who rape children under the age of 12.

The government stated that people who commit rape “shall be punished with rigorous imprisonment of either description for a term which shall not be less than seven years, but which may extend to imprisonment for life, and shall also be liable to fine.”

While four of the men were given the death sentence and another allegedly committed suicide in prison, the sixth person was released from prison after serving just three years as he was a minor at the time.

Despite the government taking new measures to tackle India’s rape crisis, it seems that it has only got worse.

Several high-profile incidents against children have happened in 2018. In April, an eight-year-old was gang-raped and murdered. A girl, aged seven, was raped in Madhya Pradesh which saw hundreds take to the streets.

Ms Maliwal condemned the attack in Bindapur and appealed to Prime Minister Narendra Modi for stronger punishments. She tweeted:

Really troubled. Been more than 2 hrs. The girl is still in the Operation Theater. Her mother is inconsolable.

On this very night, 6 years back Nirbhaya was brutally raped. Nothing has changed. Until swiftness & certainty of strong punishment is ensured, nothing will change!

The scale of sex abuse in India is staggering. According to statistics by Unicef, a child under 16 is raped every 155 minutes and a child under 10 every 13 hours.

Even though the 2012 bus incident caused the government to impose stronger punishments, the number of reported rapes of children has dramatically increased.

With rape cases being a daily occurrence in India, especially in Delhi, the fact remains that much more needs to be done to combat such a horrific crime.

Only time will tell whether new and stricter laws will be implemented to reduce the number of rapes committed in the country.

Dhiren is a journalism graduate with a passion for gaming, watching films and sports. He also enjoys cooking from time to time. His motto is to “Live life one day at a time.”
Jasmin Mistry jailed for Cancer Fraud to get £250K from Family
Bangladeshi Tutor Murders Student after Watching Crime Show