Nine months on from one of India’s most horrifically glorified sexual attacks, and the four men charged in the Delhi gang rape of a 23-year-old woman have been sentenced to death.

"This case definitely falls in the rarest of rare categories and warrants the exemplary punishment of death."

It was in December 2012 that the world was shocked to see the brutal consequence of a gang rape against a 23-year-old woman on a downtown New Delhi bus.

The young woman, who had been travelling with a male friend after an evening at the cinema, was abused and assaulted by up to six local men.

Details of the assault are perhaps too graphic to comprehend. It was reported that she was harassed, abused and raped repeatedly as well as mutilated with a metal rod that damaged her inner intestinal organs.

After two weeks of struggling to survive, she finally died from her wounds in hospital. 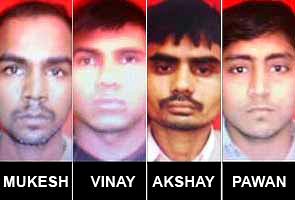 Announced on September 10, 2013, Judge Yogesh Khanna pronounced the men as: “Guilty of gang rape, unnatural offences, destruction of evidence… and for committing the murder of the helpless victim.”

On September 13, the verdict was finalised, and the four men are due to be hanged for their crimes. Judge Khanna described the horrific crime as one that had “shocked the collective conscience” of the country:

“This case definitely falls in the rarest of rare categories and warrants the exemplary punishment of death,” he said.

Days before, on the prosecuting side, Dayan Krishnan had announced that the death penalty must be given to the four men:

“There can be nothing more diabolical. There is no element of sympathy in the way in which the hapless woman was tortured. The common man will lose faith in the judiciary if the harshest punishment is not given,” Krishnan had told the judge.

The father of the victim vehemently stated: “They finished my daughter, they deserve the same fate.” 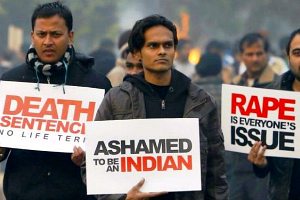 It seems that the wishes of the masses has now been granted. The four men are of six who were initially charged with the girl’s rape. On August 31, a teenager who was 17 at the time of the crime was sentenced to three years in a reform facility.

Ram Singh, the leader of the assault and the alleged driver of the Delhi bus where the assault took place, decided to take matters into his own hands and was discovered dead in his prison cell in March. It is believed that he hung himself.

The Delhi incident, which went on to become an international debate, has gendered continual opinion and reaction from all corners of the globe.

Back in December, the outrage caused the Indian government to introduce stricter anti-rape laws. Those who are guilty of repeat rape offences will now face the death penalty while others will be subject to longer jail sentences.

But in reality how much has this helped India’s women to feel safer walking the nation’s streets by themselves? One rape victim found the courage to speak out about her assault after a 22-year-old in West Bengal died from the same violation. 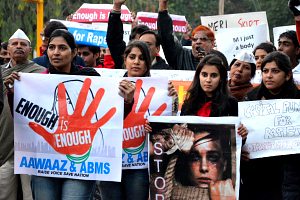 Suzette Jordan was gang raped in Calcutta in 2012. She now helps other women suffering from sexual and domestic violence across India. Speaking about the incident in West Bengal, Suzette admits:

“The brutality she was subjected to made me think that I should fight not only for myself but for the nameless survivors and for those women who had lost their lives.

“But is there more support today for rape victims? The long and the short answer is: No.”

There were 1,036 cases of rape reported up to August 15, 2013. This is more than double when compared to cases reported in 2012 from the same period, suggesting that women are beginning to come forward against crimes made against them.

But the problem is that these new laws and legislations have not actually prevented rape and sexual assault from occurring in the first place. 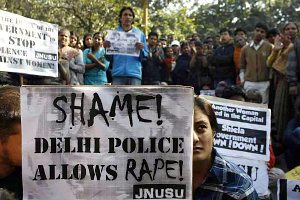 One 2011 study, titled the International Men and Gender Equality Survey claimed that 1 in 4 Indian men had committed sexual violence in their lifetimes. India also led the way in terms of gender inequality, the study stated.

In August 2013, India hit international headlines yet again. This time for the gang rape of a 22-year-old photojournalist in Mumbai who was on assignment at the time.

Some believe that simply amending existing laws is not the way forward. Lawyer at the Supreme Court of India, Karuna Nundy, says: “Though governments have passed some legislation, they haven’t rolled up their sleeves to fix the nuts and bolts of the criminal justice system.”

“Failures to convict rapists are due to institutionalised misogyny to some degree, but they’re also due to insufficient competence of police and prosecutors.”

One Indian Parliament member, Baijayant Panda believes that India has not changed its ways: “Politicians are not focused on the deeper issues because they are looking for quick-fix solutions. The system has tuned them to pay attention to the hot button issue of the week.”

“Rape is a very complex issue. Patriarchy is just part of the story. In India, it is also about rising urbanisation and alienation.”

“A lot of perpetrators are migrants who lead deprived lives, are not educated, don’t hold proper jobs and have been left behind in what is an unequal society.”

With so many calling for the death penalty for the four men guilty of rape and murder, one wonders whether this is giving women the justice they deserve. Should rape equal execution for India’s men?

Is this tangible justice for the poor victim who has been posthumously titled ‘India’s Daughter’? How has the men’s sentencing changed our opinions on women as a whole?

Indeed, why did a young woman have to undergo such horrific abuse and cruelty in order to be honoured with the title of ‘India’s Daughter’ to begin with? Was it a lucky coincidence that she was found, or was it the men’s bad luck that they were caught?

What about those female victims that have been sexually assaulted following the Delhi case? Where in the Indian state will they seek their justice from? Should all their culprits be hung in the same way?

The sad fact remains that much more needs to be done in the mission to revolutionise India’s gender equality. It is too early to tell whether India will begin to heal from the aftermath of such a horrific crime against human nature. Will India’s newfound lease of justice be a lasting one? Only time will tell.

Do you agree with the hanging sentence for the Delhi Rapists?

Aisha an English literature graduate, is a keen editorial writer. She adores reading, theatre, and anything arts related. She is a creative soul and is always reinventing herself. Her motto is: “Life is too short, so eat dessert first!”
Sex Selective Abortions rise in India
The Sex Workers of Lahore’s Heera Mandi