“Our Angel, welcome to the world Andreas”

Amy Jackson posted a family photo of her newborn son on September 23, 2019. She is seen breastfeeding her son, while fiancé, George Panayiotou, is seen kissing her forehead.

However, unlike other celebrities who prefer to conceal their newborn baby’s face, Amy opted to post two adorable photos.

The delighted parents have named their son Andreas and Amy took to Instagram to share their happiness. She stated:

“Our Angel, welcome to the world Andreas.”

Her post has received over one million likes in a short amount of time.

Furthermore, numerous messages from family, friends and colleagues flooded in to congratulate the pair. On Instagram @gregorio commented under Amy’s post:

“Welcome to the happiest days of your life! Words cannot describe how amazing these next few months will be for you! Congratulations to you and your husband Amy!”

The tremendous support and well wishes will certainly add to the couple’s joy. 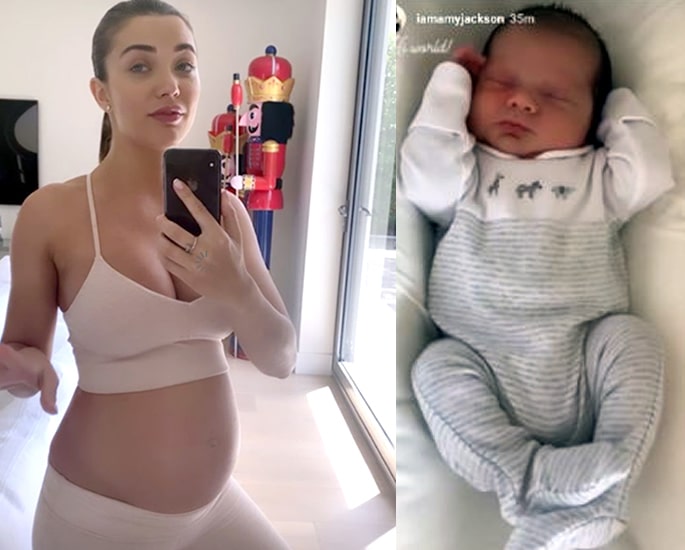 Prior to this, the actress was regularly posting stages of her pregnancy phases, in which she candidly shared her experiences with followers.

“Greece!?! Nooo … the munchkin and I are spending the rest of our summer in the back garden, waiting for their little appearance! I’m officially in week 33 of pregnancy … Embracing my body and my bump … stretch marks, weight gain and everything in between.”

It was clear the Singh is Bling (2015) actress appeared healthy throughout her pregnancy.

Also, in August 2019 the couple had a gender reveal party. They chose a light blue theme, a popular construct by many celebrities.

At the party, amongst her nearest and dearest, Amy announced she was expecting a boy.

Additionally, Amy was last seen in 2.0 (2018) alongside two of the biggest names in Bollywood: Rajinikanth and Akshay Kumar.

She has also enjoyed success for her notable role in A.L. Vijay’s Tamil period-drama Madrasapattinam (2010) in which she portrays the leading role.

As well as in the romantic film, Ekk Deewana Tha (2012) which was her Bollywood debut film.

Moreover, everyone eagerly waits for the reveal of her newborn son’s first look which will surely make hearts melt. Also, it is rumoured that Amy and fiancé George who got engaged in early 2019 will be tying the knot sooner than we think.