Dua Lipa performed at the One Plus Music Festival in Mumbai, India. Before the concert, Dua shook a leg with SRK who taught her a few of his moves.

"Try the steps I taught you on stage.”

International singing sensation Dua Lipa met the King of Bollywood Shah Rukh Khan while on a concert trip in Mumbai.

Dua has travelled to India to perform at the first-ever live concert at the One Plus Music Festival.

Amidst the buzz around the music festival, Dua Lipa met Shah Rukh Khan. Yet what took everyone by surprise was that SRK turned into a dance teacher for Dua Lipa.

“Have decided to live by ‘New Rules’ and who better to learn them from but @DUALIPA herself!! What a charming and beautiful young lady … and her voice!”

SRK continued to wish Dua the best for her concert. He stated:

“Wish her all my love for the concert tonight. Dua if you can, try the steps I taught you on stage.”

Dua also shared a message and an image of the two stars. On her Twitter she posted:

“So much fun hanging with @iamsrk today! Thank you for teaching me your Bollywood moves!!” 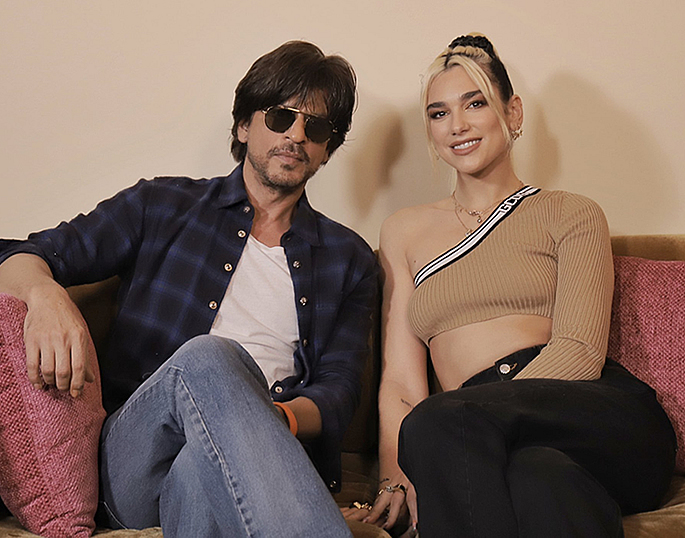 In the photograph shared, Dua Lipa can be seen in a one-shoulder beige crop top, black high-waist trousers and chunky boots.

To complete the look, Dua opted for a high ponytail with minimal jewellery.

While SRK wore a classic combination of a chequered shirt, a white t-shirt, denim jeans and trainers. To accessorise the look, he donned a pair of sunglasses.

The two stars posed for the camera on the sofa, looking chic and comfortable.

So fun hanging with @iamsrk today! Thank you for teaching me your Bollywood moves!! ???? pic.twitter.com/iXlH5BZWq4

The One Plus Music Festival took place on Saturday 16th November 2019.

The lineup for the One Plus Music Festival included:

Recently, Dua Lipa released an Indian version of her song ‘New Rules’. For the music video, Dua is seen singing in English while Hindi subtitles are being used.

“To all my fans in India, are you following the rules? Here’s a version I made just for you! Watch and listen to New Rules right here.”

Dua’s self-titled debut studio album, ‘Dua Lipa’ was released on June 2 2019. The album includes 17 hit songs like Be the One, New Rules, IDGAF and many more.

There is no doubt that Dua’s amazing vocals and SRK’s Bollywood dance moves created the perfect combination.

Ayesha is an English graduate with an aesthetic eye. Her fascination lies in sports, fashion and beauty. Also, she does not shy away from controversial subjects. Her motto is: “no two days are the same, that is what makes life worth living.”
20 Top Atif Aslam Songs that are Amazingly Soulful
Ranu Mondal trolled for Makeup Picture which went Viral