The anthology, ‘100 Great Indian Poems’, edited by Abhay K. takes us on an emotional and thought-provoking journey through India. DESIblitz reviews the prominent themes and outstanding poems of this collection.

It depicts a more realistic and everyday look at love, perfect for the modern reader to relate to

Edited by Abhay K., the anthology, 100 Great Indian Poems, has an almost impossible task of narrowing down some of the most moving verses and couplets to have emerged from the vast and richly diverse land of India.

Abhay’s purpose for doing so is to “take great Indian poems to the world”. And he begins this labour of love by asking the question on everyone’s minds:

“What makes a poem great?”

His response is seemingly simple: “What moves me is great for me. It could be a painting, a piece of music, a photograph, a poem or anything under the sun. I don’t think there is or there can be a universal definition of greatness.”

Admitting to us the subjectivity of this fickle feeling, he encourages us readers to find our own poems and make our own anthologies instead.

However, as existing anthologies go, 100 Great Indian Poems is an impressive starting point. And Abhay has certainly done much of the hard work for us.

The poems selected for the book published by Bloomsbury India span 3,000 years and 27 different languages. This is a feat in itself considering the rich and stunning diversity of Indian poetry.

Abhay includes everything from Bengali and Bhili to Sanskrit and Santhali and considers almost all Indian poetic traditions. Interestingly, the anthology only uses English translations, thus targeting itself towards the new generation of Indians and the wider diaspora to read and enjoy the words of their ancestors.

DESIblitz takes a closer look at some of the key themes and poems that Abhay has selected for this diverse anthology.

An Anthology of Love 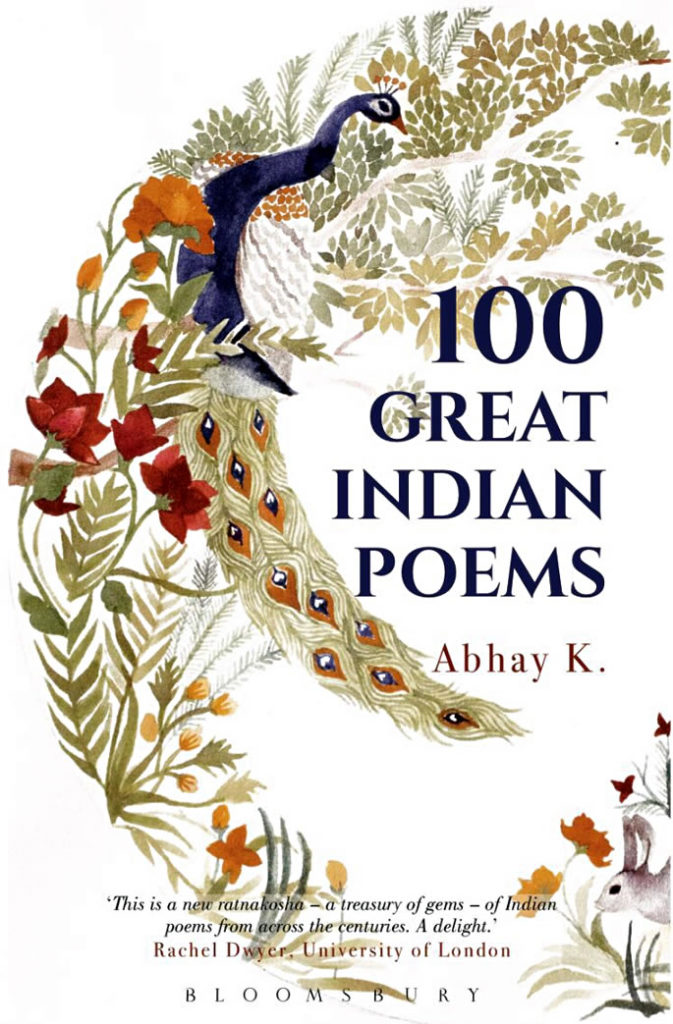 100 Great Indian Poems is at its most moving when it features some iconic reflections about love. Mir Taqi Mir invites us in with his opening verse, “Love brings tiny sweat into your hair/like stars marching in the dead of night.”

We then begin our journey through endless emotions of forbidden love, lust and romance. Poems 66 to 76, in particular, include selections from great collections including the Chauraspanchasika.

From the 11th century, ‘The Love Thief’ is a set of fifty verses from Kashmiri poet, Kavi Bilhana. There are several versions of the imprisoned Bilhana writing of his secretive love affair with the Princess Yaminipurnatilaka.

The anthology includes three of these stanzas. And the evocative poetry immediately inflames the reader’s senses.

Nevertheless, it’s interesting to consider why Abhay has chosen only these particular stanzas out of the fifty. All are so vivid in their description of the “gold-tinted” beautiful princess with “lotus eyes” and “poppy lips”.

Then, in contrast to the sweet longing of the Chauraspanchasika, are selections from the Gathasaptasati. Written in the Prakrit language of Maharashtra, it is made up of 700 single verse poems.

These poems are mostly women talking about life in local Indian villages during the third and fifth centuries. It depicts a more realistic and everyday look at love, perfect for the modern reader to relate to while looking at the past.

In the selections, there are profound truisms like “Distance destroys love/So does the lack of it”. These feature alongside the comic scene of a woman giving birth telling her friends “I won’t let him/Touch me again” only to hear laughter. Whatever the friends’ laughter might mean, this is perhaps a far more familiar scenario for us than a princess and her secret lover.

For many of us, it’s incredible to discover how ancient poetry feels so familiar and relevant in appreciating how frustrating love can be.

The anthology avoids the temptation of only featuring historically important poems. It equally celebrates more recent works, crucial for the future significance of this book.

It gives a voice to everyone as the tribal, Dalit, feminist and LGBT communities each have their say.

As Abhay promises, a more feminist-approved look at women can also be found. Women are often objectified in poetry, usually described for the male gaze, but there are poems that break this mould.

Katyayani’s Champa tells us about a girl who “grew up/among seven brothers” and as flexible as a bamboo reed, sneaks in to become a “black shadow” in her father’s dreams.

She’s expelled from the house and dies with her ashes scattered over the village. However, Champa returns smiling among the cactus weeds that grow “alone and unafraid” outside each door.

In a country known for rejecting girls in favour of boys, it’s hard not to think about modern day issues while reading this poem.

As a poet, Katyayani typically subverts classical texts in her poetry. Instead, she replaces misogynist messages with a feminist critique of the patriarchy.

100 Great Indian Poems doesn’t shy away from the tougher subjects either. In Gopal Honnalgere’s How To Tame A Pair Of New Chappals, the persona warns the reader to keep their “chappals” i.e. workers apart. This is because of the fear that “they may come to know about/independence day, satyagraha,/holidays, working hours, minimum wages and corruption”.

This is a powerful poem and shows how poetry can serve as social commentary and actually become a real call to action. While the poem may address the lazy and corrupt, it ultimately encourages the “chappals” or ordinary workers to stand up in anger.

The poem finishes with the strong, lasting message of: “Now they are good subdued labourers ready to work overtime/For your fat feet.”

Yet, it is the ‘labourer’ who takes away the ultimate message from the subtext beneath the subtext: to never give into this subjugation.

When there are still such huge inequalities in Indian society, this is a crucial message. For those who still live in abject poverty, it’s still important to not fall into hopelessness. 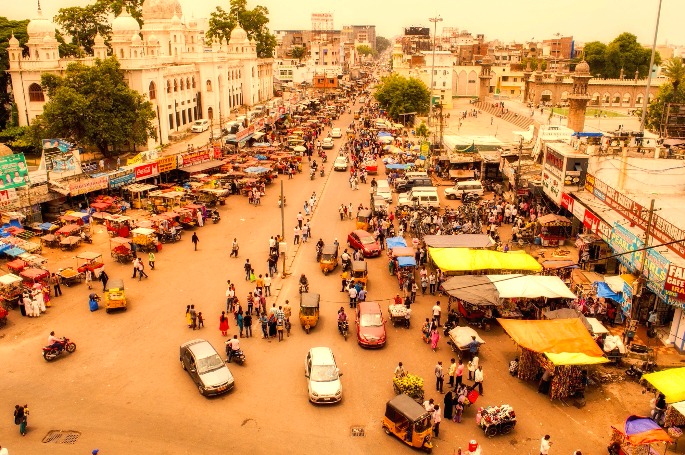 There is one theme that editor Abhay K. fails to mention in his introduction: hope. Combining the themes of social issues and the passionate emotions infused in poetry, modern India is forging its own unique identity.

After all, when we think about great Indian poems, surely we should look to the future too?

Abhay K. talks about picking the poems that move us and Kabariwala by Kavita A. Jindal seems a perfect choice.

One of the few poems in the collection to be originally written in English, the persona talks to a kabariwala, or a scrap and rag dealer. He talks about going away, to somewhere there is “free love” like England where he won’t be a kabariwala.

The poem is notable for its subtitle dating it to Delhi, 1975. Some readers may think of Indira Gandhi’s Emergency in 1975, but Kavita A. Jindal tells DESIblitz about the inspiration behind her poem:

“Kabariwala is based on a true incident from 1975. I remembered it years later and didn’t know what had triggered the thought, but this often happens with random childhood memories.

“His phrase ‘free love’ probably stuck in my head although I didn’t quite know what that meant. It was colloquial speech of the time. I think in those days ‘free love’ may have been a big deal for a young man.”

“It’s a snapshot of a particular time. The excitement of a person breaking shackles and strictures by departing for somewhere new where they can be themselves. This is guesswork on my part, but the kabariwala must’ve had hopes and dreams and was pleased about having the opportunity to move to England.

“My hope for him is that he worked hard and was well-rewarded. Perhaps he gained a better status.

“How times have changed is made apparent in the sentence ‘in foreign / they don’t re-purpose old things.’ Western countries were deemed rich enough to be wasteful but I would wager that India has an equally throw-away culture now. My hope is that readers reflect on that part of the poem too – who recycles, who doesn’t; what is recycled and where?

“Lastly, it’s a poem about childhood and the innocent (possibly ignorant and hurtful) questions kids ask: ‘Will you be a kabariwala there?'”

Kavita raises the point of the ever-changing fabric of India. The poem may seem closer to our time than others, but India has dramatically become more like the west in the last 40 years. Still, during our discussion on the difference between her poem and the others, Kavita shows how the poem maintains a ‘Desi’ flavour, and essentially its Indian heritage:

“The difference is probably in cadence and style. This poem is informal and conversational, yet bound by the strict form I have given it.

“There is direct idiomatic speech, but it makes sense without translation. For instance, I use the words ‘going foreign,’ which is ungrammatical if one were being purist in English, but is just how the kabariwala spoke.

“In rhythm and tempo, the poem straddles two of my languages, English and Hindi. It may spark an interest in a reader who doesn’t know Hindi.

“What is a kabariwala? If I’d titled the poem ‘scrap-dealer’ it would not conjure up local imagery nor do justice to all the different types of kabariwala we have in India.

“This is one of those poems where two languages are inherent and have cohesively formed an interesting whole, although on the surface the poem is in one language. Such a synergy doesn’t happen often, much as I would like it to.”

It’s very true that such synergy of poetry and language can be difficult to achieve. In fact, Abhay K. in his ‘Editor’s Note’, mentions that several great poems like the Rashmirathi don’t feature in the anthology owing to untranslatability.

But on the whole, 100 Great Indian Poems does well to draw together the abundant diversity of the Indian history.

Arranged by title rather than the poet or a chronological order, we are reminded of the timeless nature of poetry. The emphasis then is on the creations themselves rather than their creators.

And it is remarkable to see how we can come across familiar lines from celebrated poets like Kabir, Ghalib, Amir Khusrau, Rabindranath Tagore and Shakti Chattopadhyay amidst some more unfamiliar ones.

The voices of those young and old, enchant us with all rasas or flavours, beyond Sringara. We giggle at the witty humour before another stanza moves us to pity.

But perhaps the anthology’s real skill is appreciating the past while capturing something of India’s future.

Indeed, India is not just small villages and wealthy Maharajas anymore. It’s towering buildings and ambitious adventure-seekers, proud of their Asian identity in new lives at home and abroad.

Whether it’s the love and passion known worldwide from our ancient poetry and Kama Sutra or cheeky poems that capture the same Desi humour as Bollywood comedies, the anthology shows India’s emotional richness to be a constant throughout the ages.

Tapping into the timeless feelings of all its diverse communities, 100 Great Indian Poems is an emotional feast. One that is as rich and flavourful as India itself.

Published on 10th February 2018, the anthology is available to purchase on Amazon now.

An English and French graduate, Daljinder likes travelling, wandering around museums with headphones and getting over-invested in a TV show. She loves Rupi Kaur’s poem: “If you were born with the weakness to fall you were born with the strength to rise."
Kodo’s ‘Evolution’: Taiko Performing Arts at Town Hall Symphony Hall
Satinder Sartaaj brings Punjabi Sufi Music to Birmingham Symphony Hall