There have been some weird and strange South Asian world records broken over the years. We take a look at some of them.

“I took it as a challenge.”

South Asia has a rich and diverse population, including those that are dedicated to strange and wonderful Asian world records.

Over the past decade, there have been records broken, records lost and plenty of individuals that repeatedly excel at being some of the best in the world at what they do.

There are several strange world records held by South Asians.

This ranges from the longest turban in the world to the most motorbikes running over a person.

We explore some of the more unusual South Asian world records which have been recognised globally for their talent and motivation.

The Longest Fingernails On A Single Hand 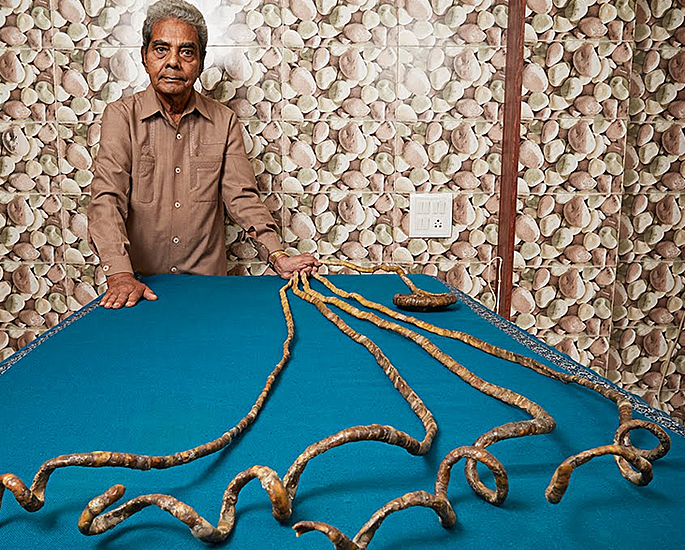 Pune’s Shridhar Chillal, aged 84, is known as the man with the longest fingernails on a single hand, having stopped cutting the fingernails on his left hand since 1952.

Though he is famed for his Asian world record, it wasn’t his intention to make a world record.

Chillal decided to grow his nails after, at school, he accidentally broke a teacher’s nail.

This led to the teacher telling him off and claiming that Chillal would never understand what he had done because he never committed to anything.

Stinging, Chillal decided to prove his commitment by dedicating his life to growing his nails. He told The Hindu: “I took it as a challenge.”

In 2014, he became a well-known Asian world record-breaker, but the price for having such long nails was affecting him.

Though he had a wife, children and grandchildren, his nails still caused him issues.

Chillal struggled with sleeping and the constant weight on his hand, as well as finding simple inconveniences such as the wind a big danger.

In 2018, Chillal had his nails cut and following his wish to have them preserved in a museum, they were on display at Ripley’s Believe It or Not in Times Square, New York.

The Most Times Passed Through a Toilet Seat in One Minute 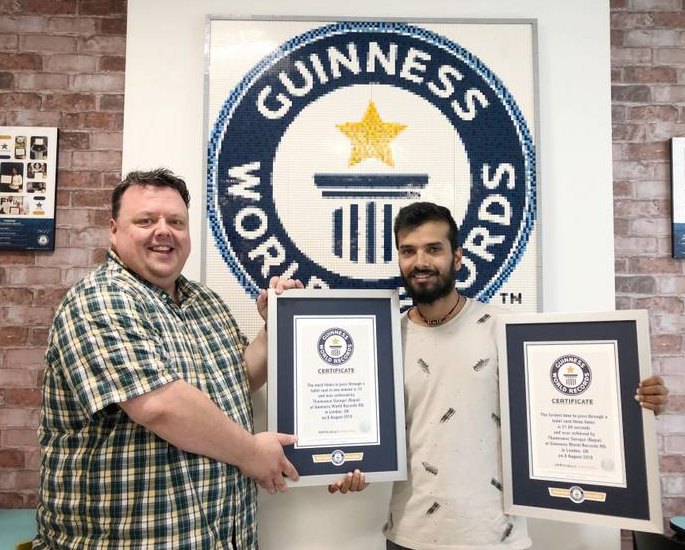 One of the more random Asian world records – who could pass through a toilet seat the most times in a minute – was achieved by Thaneswar Guragai from Nepal in 2018.

Guragai, who has 14 different world records overall, showcased his record in London, bringing his own toilet seat from Nepal, and managed to pass through it 10 times.

He has always been interested in records, having spent a lot of his time doing research on world record holders.

In his research, he found Ashrita Furman, who is known to hold the greatest number of records in the world.

Guragai was often mocked for his attempts and training, but he used this to motivate himself further.

At times, he would spend 10 hours a day training to become an Asian world record breaker in many categories, and his efforts paid off.

Some of these achievements included the longest time spinning a Guinness World Record book on his finger (30 minutes) and the most passes through a tennis racket in 30 seconds (22).

The Longest Turban in the World 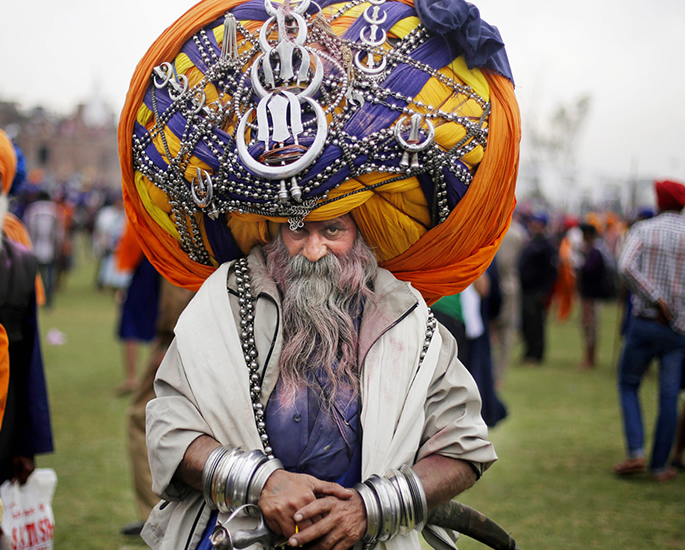 Avtar Singh Mauni, aged 60, from Patiala, is considered a hot contender for Asian world records with the longest turban in the world, at 645 metres in length.

This is the same length as 13 Olympic-sized swimming pools.

Mauni hadn’t always worn such majestic turbans. He began with an ordinary length of 151 metres but gradually increased it until it soon weighed 100 pounds.

As well as his heavy turban, he also wears his ornaments and weapons, combining the weight he carries to 187 pounds or 85 kilograms.

It takes Mauni six hours to wrap the sizeable turban around his head.

As it is so huge, he has to ride a motorbike to the Gurudwara, the only transportation that will accommodate him.

But Mauni doesn’t mind the size and weight of his turban. He claimed:

“I don’t consider it to be a burden… I feel like it is a lotus flower on my head.”

Certainly, it does attract attention and wonder from across the world, but Mauni often wishes for attention more than just his world record.

“Some people just click a photo and run away after a minute.” 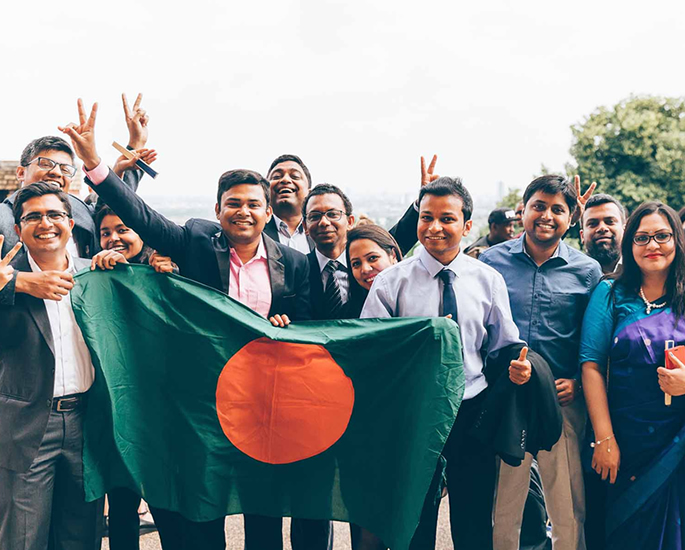 The thinnest nation, as Guinness World Records noted in 2010, is Bangladesh.

Bangladesh overall has the lowest Body Mass Index (BMI) in the world, with the national average for women being 20.5 and for men being 20.4.

What made the nation the thinnest is the generally sparse diet, which mostly consists of rice.

A more shocking statistic that explains the reason for the Asian world record is that more than nine million children in Bangladesh are underweight and have stunted growth.

This is more than half the child population in Bangladesh.

The Fastest Typing with a Nose 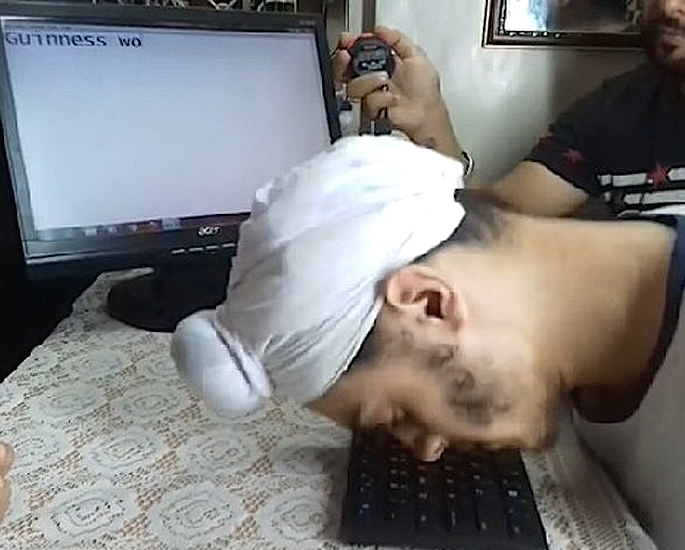 In 2017, Davinder Singh from New Delhi set the world record of the fastest time to type a sentence with a nose.

Not only did Hussain beat this record in 2012, but he also beat the world record for the fastest time to type the English alphabet (3.43 seconds).

This followed encouragement from his family.

Hussain scooped his second world record by typing the sentence “Guinness World Records has challenged me to type this sentence using my nose in the fastest time” in 47.44 seconds.

As the previous record-breaker explained, he managed the quick feat by “[typing] with one eye closed, as it is difficult to locate the keys”.

However, Singh set a new Asian world record by typing in 40.19 seconds. 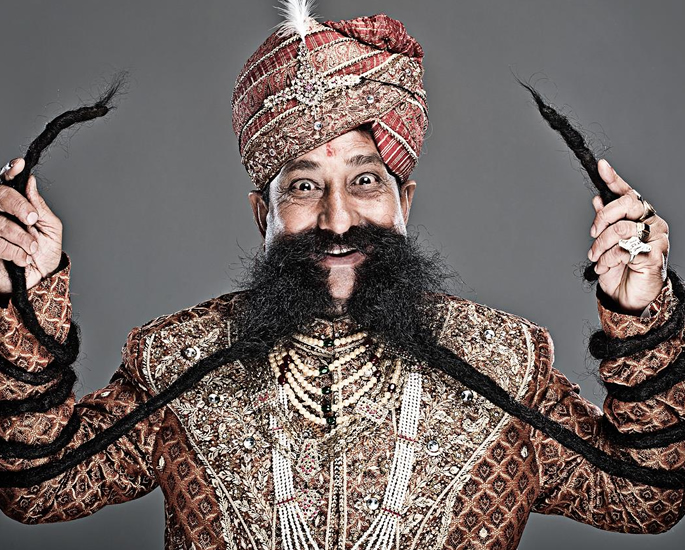 Grown for 32 years, the moustache of Ram Singh Chauhan, aged 65, from Jaipur, is the longest in the world.

Chauhan began growing his moustache in his late teens, explaining:

“The moustache is the symbol of pride and respect… it is priceless.

“It’s a man thing. We are Rajputs. It’s a common practice to sport a moustache in our clan.”

“I massage it and oil it regularly and I wish it every 10 days, which takes a long time.”

Every day he takes care of his facial hair by massaging coconut, olive or almond into it, and doesn’t use shampoo or soap.

He has a place in the German Beard and Moustache Club and even had a role in James Bond’s Octopussy as well as several Bollywood films.

Chauhan’s fans include his wife, Asha, and children, who are proud of his Asian world record.

Asha, who also helps with the moustache care, commented:

“I have grown fond of it. I often told him to shave his moustache off [but] I never meant it.”

With hopes of inspiring the younger generation, Chauhan said:

The Most Rubik’s Cubes Solved While Riding a Bike 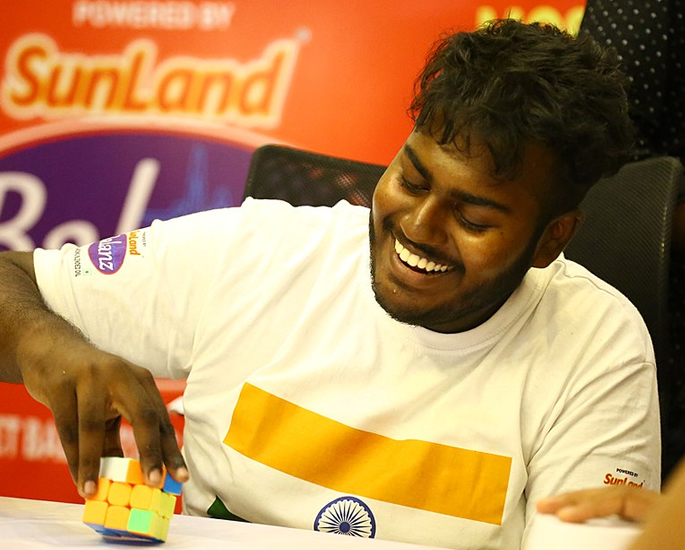 This complicated Asian world record is held by Arumugam PK, aged 21, Tamil Nadu, but is only one of three records held in his name.

Whilst riding a bicycle, PK solved 1,010 Rubik’s cubes in the time of six hours, seven minutes and 44 seconds in 2017. He did this without allowing his legs to touch the ground.

PK’s interest in Rubik’s cubes began when he was in class seven. He said:

“I observed a classmate of mine solving the cube and that fascinated me.

“I bought one and tried solving it. There’s been no looking back since.”

He was inspired by the previous winner, Winfred Michael, and faced constant rejection from Guinness World Records until he was finally accepted.

The stakes were getting higher, as in that time, the record was continuously broken and the time he had to beat got shorter.

PK’s practise paid off, as after spending three hours a day at the KV IIT campus basketball court solving cubes, he was soon awarded the record. He commented:

“I am a proud Indian and wanted to make my country proud by my achievement at a world level.”

The Most Motorbikes Ran Over a Person 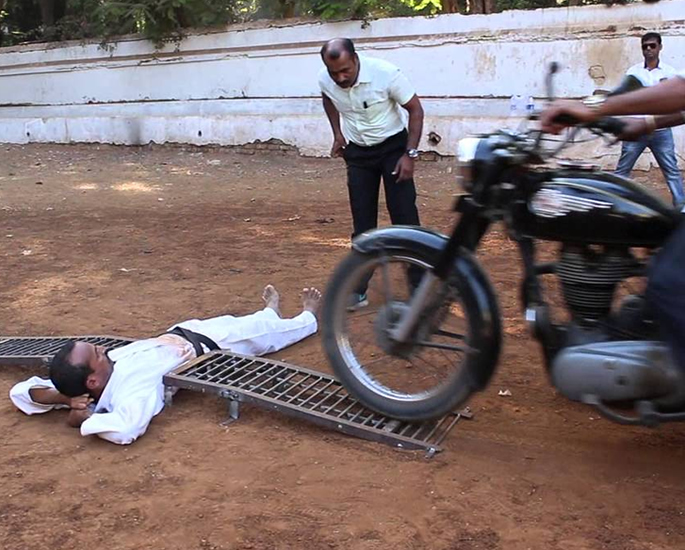 Known as the iron stomach man, Pandit Dhayagude from Mumbai has the Asian world record of the most motorbikes ran over a person.

The 121 motorcycles ran over him one by one in 2016, each with a weight of 257kg. Though the record was extreme, Dhayagude came away unscathed.

Dhayagude, who used to take self-defence and karate lessons, slowly built up his stamina and strength by focusing on stomach fitness.

Dhayagude recognised the stomach as being the part of the body at most risk of disease.

In preparation, he sought out motorbike dealers and biker groups with vehicles over 250kg – the qualifying weight – to help him train for his record.

It was difficult, as many didn’t want to take part in the dangerous activity.

However, Dhayagude was determined to break a world record.

As well as his Guinness World Record achievement, he has also taught self-defence to thousands of young women for free.

He also holds the Limca Book of Records for completing the Virabhadrasana Pose One for three minutes.

The Most Bridesmaids in a Wedding 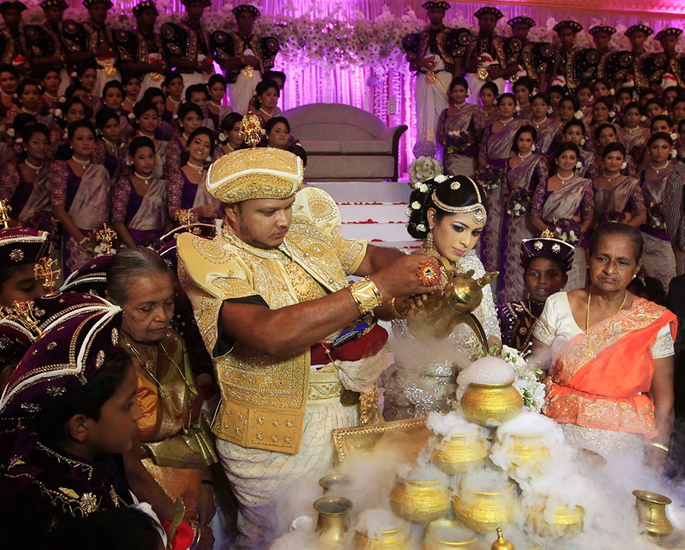 One of the world records in Sri Lanka belongs to Nisansala and Nalin, who broke the record for having the most bridesmaids at their wedding in 2013.

In total, the wedding consisted of 126 bridesmaids, 25 best men, 20 pageboys and 23 flower girls.

Behind the scenes, wedding dress designer Champi Siriwardana took the helm, following her dream to break a record in the wedding industry. She said:

“[It] is no mean feat and one that I cannot achieve alone… there can be no mistakes.”

Siriwardana arranged a press conference on the day of the wedding, bringing attention to the beautiful and jam-packed unconventional wedding.

As a guest of honour, First Lady of Sri Lanka, Shiranthi Rajapaksa, also turned up at the wedding.

Since the 2013 record, it has since been beaten, but the wedding day remains just as memorable for South Asia and for the happy couple.

The Longest Hair on a Teenager 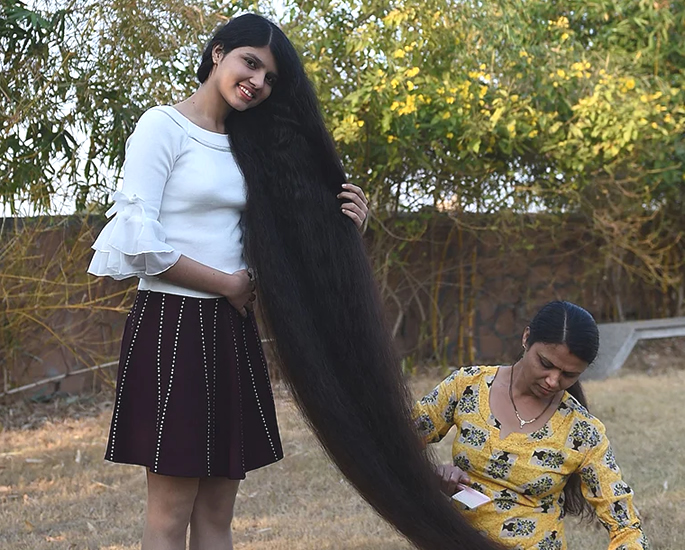 Nilanshi Patel, aged 18, from Gujarat, set the Asian world record for the longest hair on a teenager.

In 2018, she earned the record with hair that was at a length of five feet and seven inches, but a few years later she beat that measurement.

In 2020, her hair was measured to be six feet and 2.8 inches (190cm), though she isn’t eligible for the teenager category due to her age.

Instead, she has the potential to beat the adult record for hair length.

India’s Rapunzel, as some call her, claims it takes 30 minutes to dry her hair and an hour to comb after washing it once a week, but it’s worth it for this Asian world record-breaker.

Patel’s decision to grow her hair long came after a bad haircut when she was six-years-old:

To measure her locks, Patel has to wet it – as the hair is longer when it is wet – and lie on a flat surface to get the most accurate number.

As these Asian world record breakers have taught, hard work and dedication are all a big part of what makes someone stand out and achieve their goals.

Whether it’s persisting with growing hair or spending hours training to improve time and skill, anyone can be a world record breaker when they put their mind to it.

It’ll only be a matter of time before another South Asian person achieves a strange world record.

Sharna is a Film Studies student who loves reading, horror and writing. Her motto is: "You can, you should, and if you're brave enough to start, you will."
4 New FAU-G Features fans should Look out For
Virat Kohli named India’s Most Valuable Celebrity