10 Best Turban and Pagri Styles for the Groom

A groom is not a groom without adorning a turban on his wedding day. Let us take a look at various pagri styles for a groom to choose from.

In the Indian subcontinent, a groom is expected to dress like a king on his wedding day.

This is probably why his ensemble comprises of embroidered sherwanis, jewels and turbans as he arrives riding on a horse or in a swanky car.

A South Asian groom’s attire would be incomplete without a turban. A turban is a piece of cloth tied around the head and is often decorated with a sehra and jewels.

It can be worn by other members of the family but is customary for the groom.

The turban is a beautiful traditional headgear, tied in different ways and is known by several names in various cultures like a pagri, saafa, kulla, and pheta.

Previously, turbans used to be worn only by the nobility and were considered symbols of wealth, prosperity, and royalty.

Unfortunately, turban tying is fast becoming a dying art as the number of people wearing turbans is decreasing.

Several grooms choose readymade hat-like pseudo turbans for their big day to do away with the hassle of turban tying. However, no readymade turban can look as royal and regal as an authentic one.

DESIblitz has assembled a list of ten turban styles for South Asian grooms to choose from. 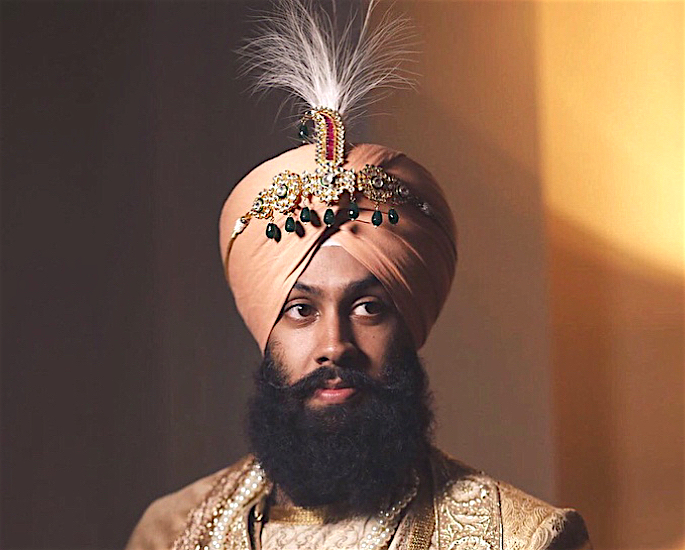 For a practising Sikh, a pagri is a part of his existence and religious identity. They also have specific colours associated with different occasions and worn by different people.

A popular colour chosen for the turban is burgundy or red for weddings, however, a sikh groom, can choose any colour for his turban and even coordinate it with the bride’s outfit. 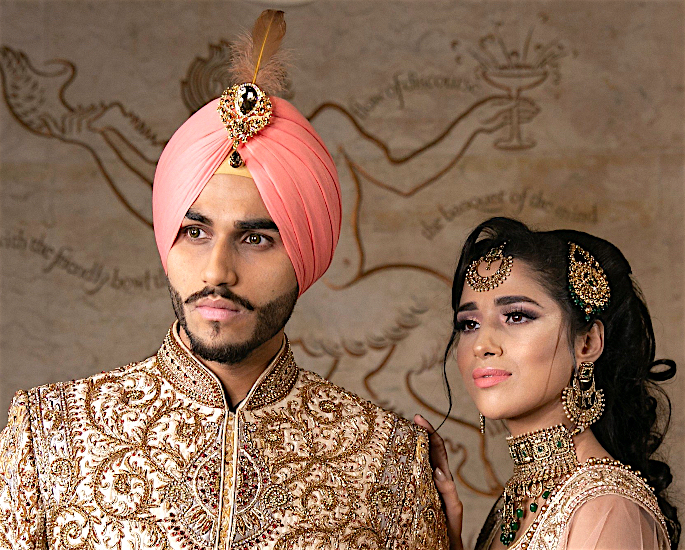 The turban is decorated with a sehra, pearl strings, and kalgi. 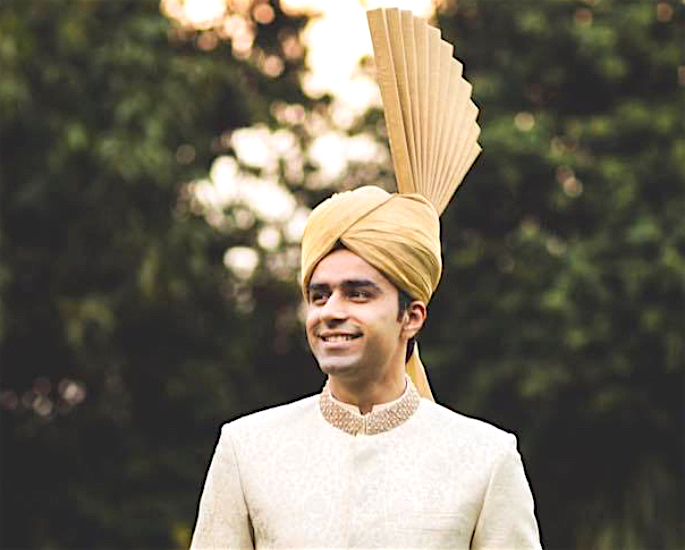 This style of turban tying is popular in Pakistan and is referred to as a kulla or Peshawar pagri. It is a Pashtun-style turban that is named after the city of Peshawar.

This beautiful turban is made from two pieces; a kulla (cap) and a lungee (a cloth wrapped around the kulla).

It stands out because of the fan-shaped edge known as a turra which is magnificent to look at.

It can be worn on a pathani kurta pajama or a sherwani and makes a groom look no less than a nawab (prince). 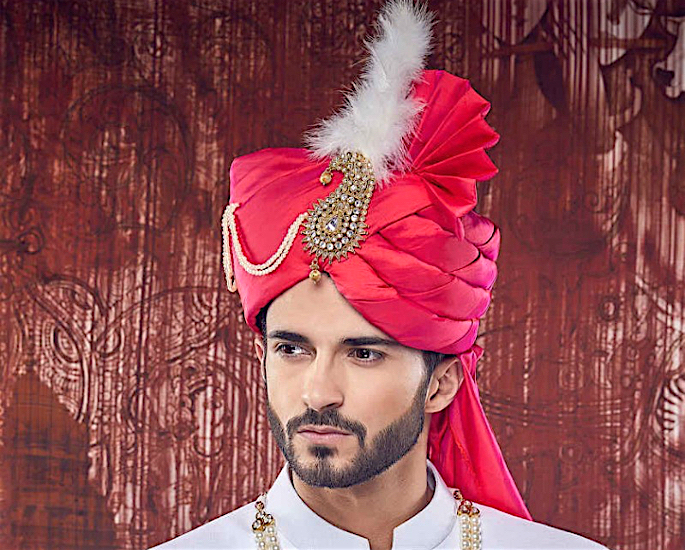 Rajasthan is known for its folk music, sandy terrain, spicy food, forts, palaces, and colourful turbans. A Rajasthani groom’s turban is a specimen of beauty. They are also available in various forms.

The fabric of the pagri is dyed in bandhani or lehariya which are styles commonly found in Rajasthan. It is twisted around the head in beautiful patterns. 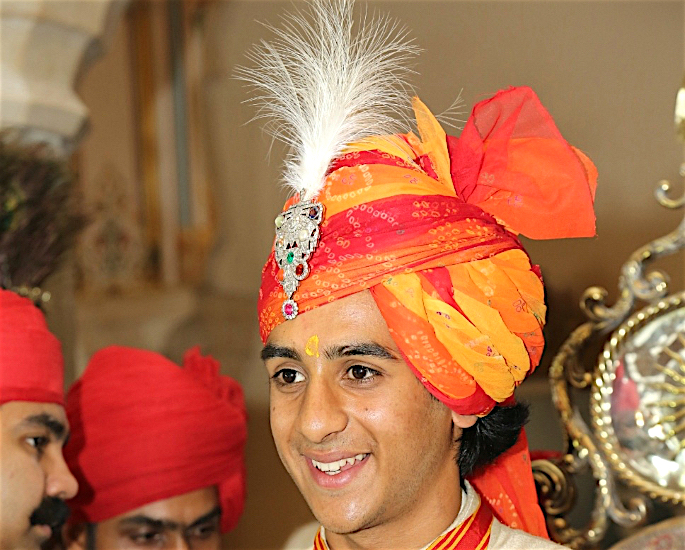 A Rajasthani sehra called a mod is tied on the pagri of the groom as well as on the head of the bride when they take the pheras or vows. This brooch-like sehra further enhances the beauty of the pagri. 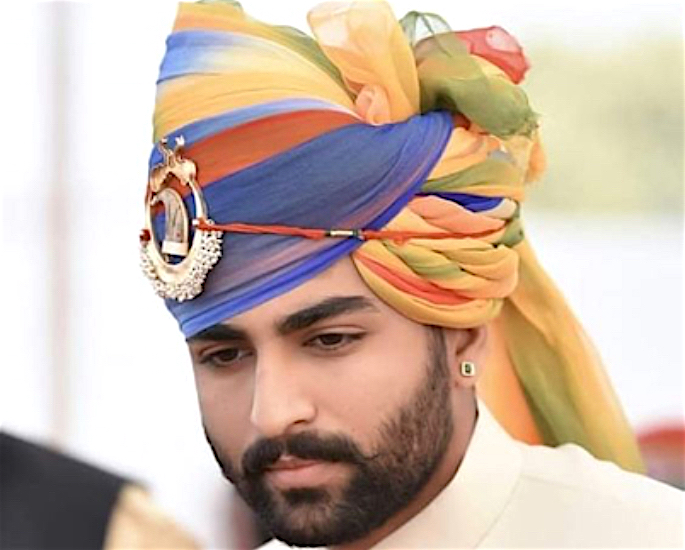 This beautiful multi-coloured turban in which a cotton fabric of about 9 meters in length is dyed in five colours, is named after the city of Jodhpur.

The turban is tied in a manner that all the five colours are visible in the turban. It is also decorated with sarpech made from precious and semi-precious stones.

This multi-hued turban can be worn with an understated sherwani or Jodhpuri suit. The combination of the two will make for a stunning groom. 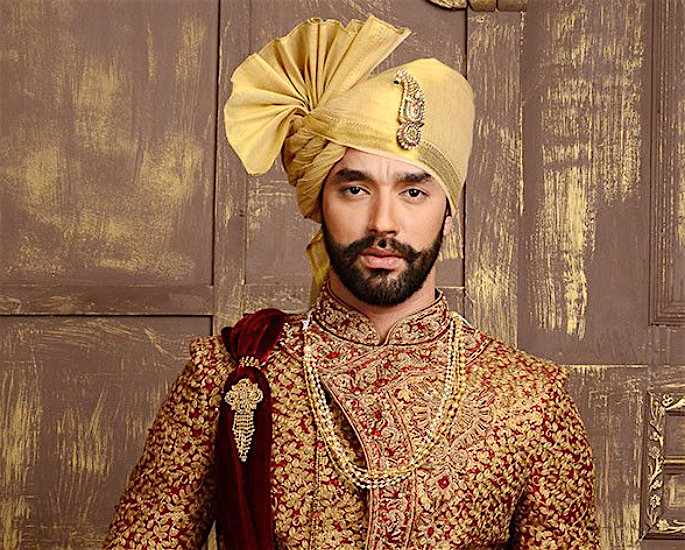 The Marathis call their traditional turban a pheta. It is worn on festivals, important occasions and of course on weddings exclusively in Maharashtra.

Other than the traditional orange and white pheta there is a Kolhapuri pheta famous for its bandhani pattern of colours. Kolhapuri pheta is perfect for any groom, Marathi or not. 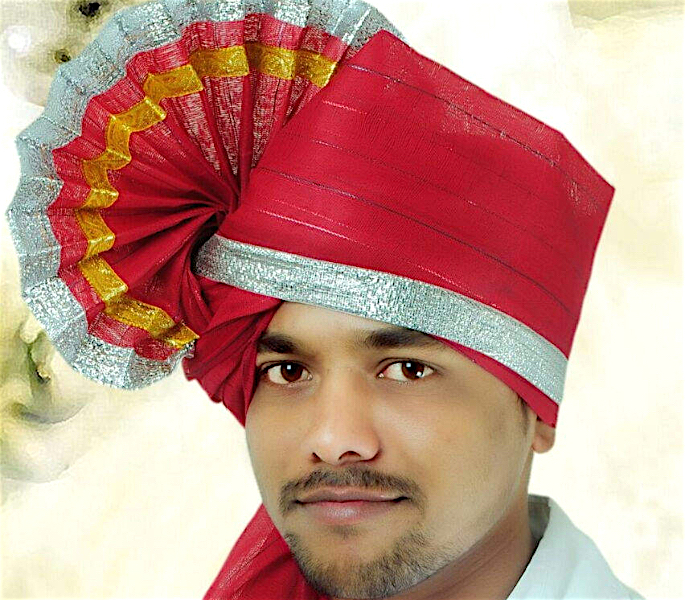 There are numerous styles of draping a pheta and you can pick any you like. Also, known as a pataka, it is a symbol of honour and pride. 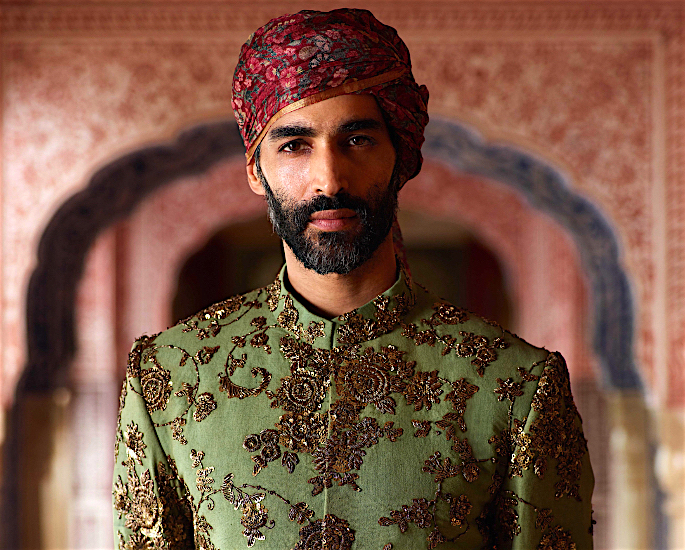 A groom who wishes to experiment with his look on his wedding day can opt for printed saafas which are forever in rage.

They are available in an array of floral prints and various other patterns. You can match the printed saafa with your Nehru jacket or with the bride’s attire. 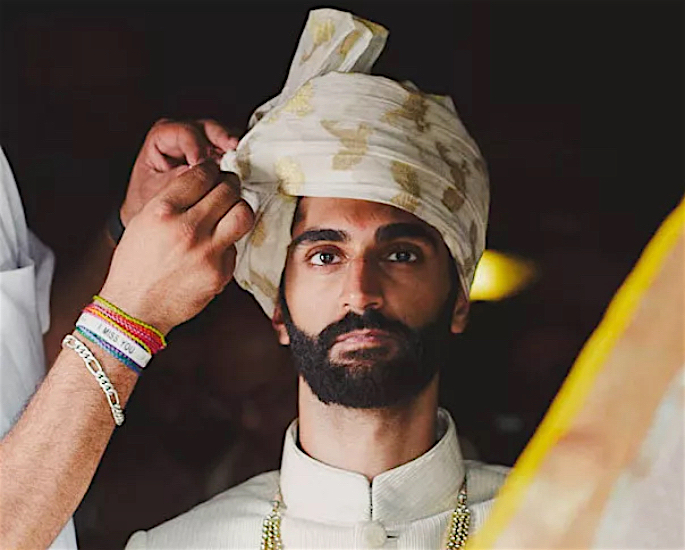 These prints can make a groom look traditionally resplendent and quirky at the same time. 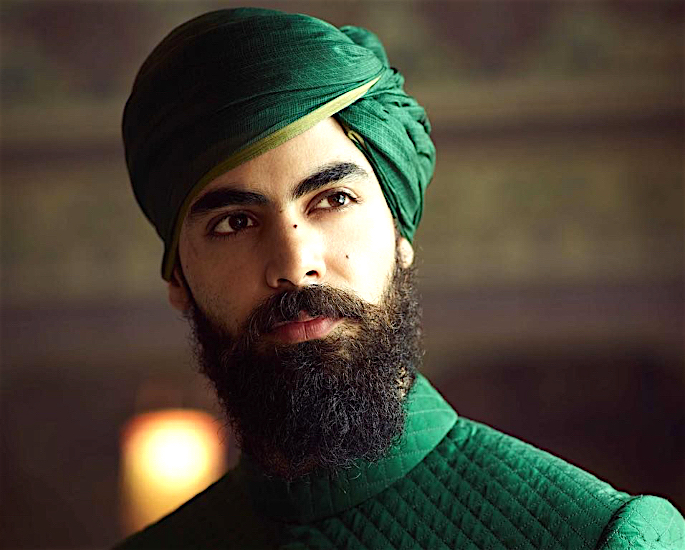 If you do not wish to adhere to traditions on your wedding day and intend to tie your turban rather differently then you can select this understated style.

The monotone fabric with no embellishments, bling or jewellery looks simple yet suave. 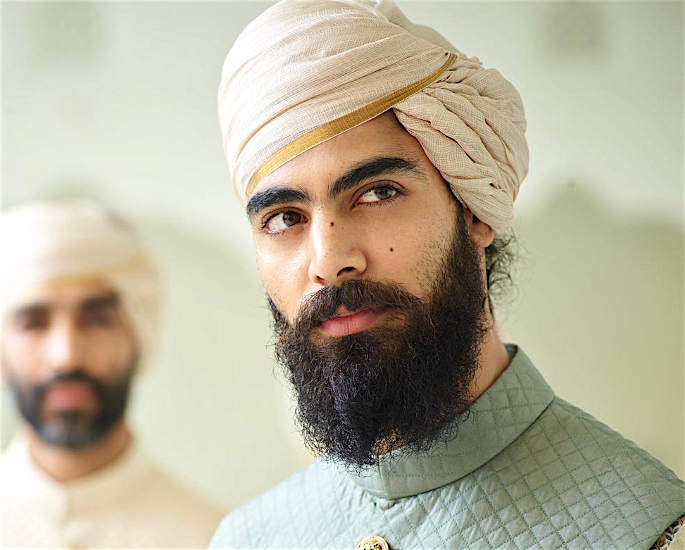 The pagri has no frills and looks like a modern avatar of the traditional headdress. 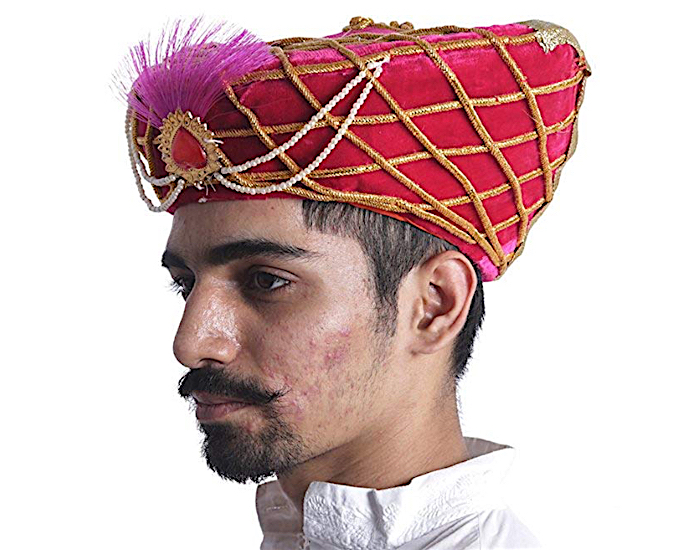 This royal pagri is named after a popular Marathi title called Shinde. Made with the finest of silks, this turban was worn by the nobles and commandants of the Scindia dynasty.

When the Scindias ruled their state, the length of the pagri and the number of jewels it was adorned with was dependant on the stature of the wearer.

Specially trained turban makers called ‘pagarbandhs’ were employed solely for crafting these turbans for the royals.

You can choose to style your pagri in the Shindehshai style if you wish to look like a royal Scindian descendant. 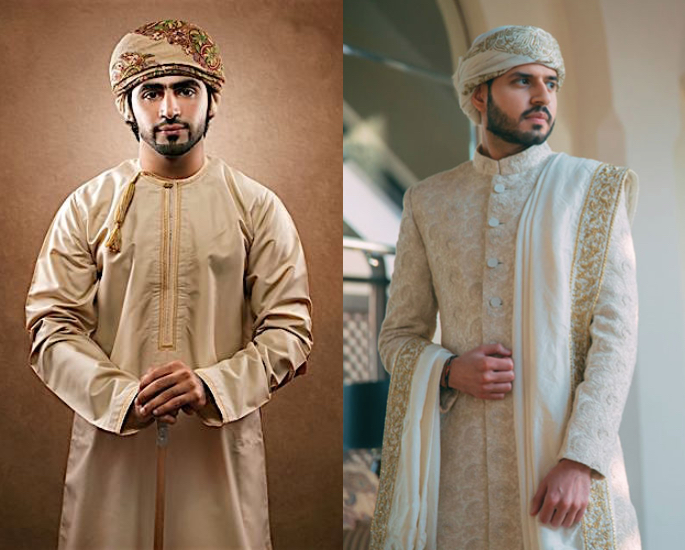 A mussar is a head-turning traditional omani headgear fashioned with cloth made from the finest wool such as pashmina.

People in different areas used to drape the mussar in a particular way which helped in identifying the place they belonged to.

Tied like a bandana, this turban can make a groom look royal and dapper and can go with both a traditional omani attire as well as a sherwani. 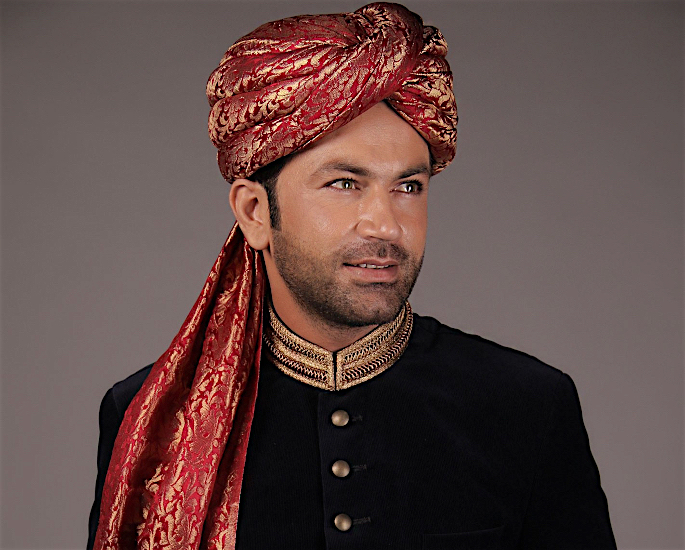 Jamawar is a shawl of brocade woven into the finest of silk made especially in Kashmir. The intricate work of original jamawars takes decades to complete which is why they are very expensive.

Turbans fashioned with these exquisite jamawar shawls will make a groom look as regal as they can.

Embellishing them with feathers, brooches, and fine jewellery a groom will certainly look royal and aristocratic. 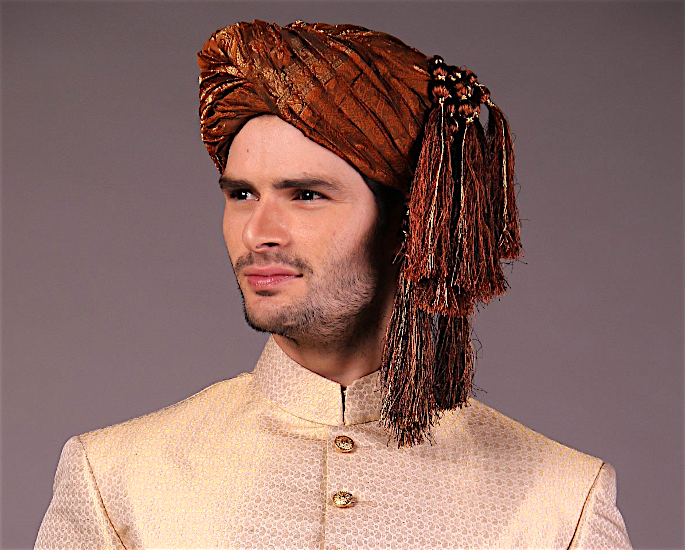 We hope our compilation of turban styles will help you pick the one that works best for you.

Just make sure you get one tied rather than buying a hat-like readymade turban.  The latter makes you look more like a magician and less like a groom.

You can get one tied a day before and wear it the next day for convenience but we highly recommend getting them tied. Look your regal best with these beautiful turban styles.

Parul is a reader and survives on books. She has always had a penchant for fiction and fantasy. However, politics, culture, art and travel intrigue her equally. A pollyanna at heart she believes in poetic justice.
Priyanka’s Mum reacts to Daughter’s Grammy 2020 Dress
Malaika Arora stuns with Bold Fashion Looks