How Artist Raqib Shaw is Representing Kashmir in his Paintings

Raqib Shaw is an Indian-born artist who is loved for his intricate paintings. We look at how he showcases his childhood memories of Kashmir his latest work.

Nestled in his studio, amid the roaring London bustle, sits artist Raqib Shaw.

He is surrounded by his dogs, assistants, and a vast collection of Bonsai trees. Here he spends years creating intricate paintings of envisioned landscapes.

Raqib Shaw was born in Calcutta but spent his formative years in Kashmir.

When he was younger he intended to continue the family trade and become a merchant.

This changed when he visited the National Gallery in London for the first time. He was inspired by a painting of merchants and decided to become an artist.

Raqib takes his background as inspiration for his latest work: Landscapes of Kashmir (2019).

DESIblitz explores how this London-based artist depicts the memories, real and imaginary, of his homeland. 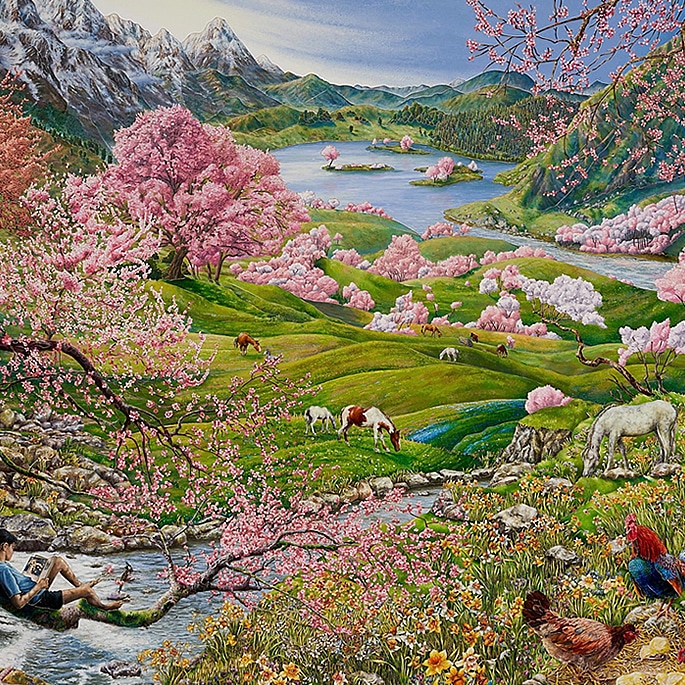 Landscapes of Kashmir is a collection of multiple works by Raqib Shaw, one of which being Four Seasons (2019).

In Four Seasons, Shaw depicts the transition from childhood to adulthood through four separate but connected paintings.

The first painting in this series is Spring (2019). It shows us a fairytale-style image of a young boy sat reading in the branches of a cherry blossom tree.

He is surrounded by idyllic countryside, complete with clear blue rivers trickling down from an inviting highland.

In both the foreground and background are children-book-style farm animals. There is a colourful rooster, a beautiful white horse, and happy cows grazing in the distance.

Landscapes of Kashmir was exhibited at Pace, a contemporary art gallery in New York. During a filmed interview with this gallery, he discusses Spring.

Both Shaw and an art dealer look at Spring together and give their interpretations. They both agree that this painting is heavenly and paradisal. Raqib asserts:

This piece portrays life in Kashmir as idyllic.

The painting depicts a peaceful, colourful and beautiful place to spend a childhood as the boy sat in the branches. 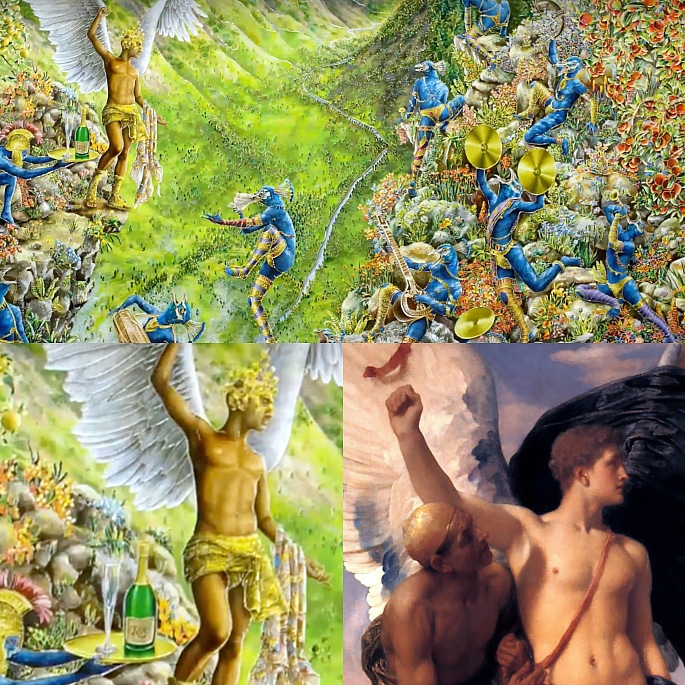 Next up in his collection entitled Four Seasons is Summer (2019). Here the transition to a more ominous depiction of adulthood comes to the surface.

We see a reference to the character Icarus from Frederick Leighton’s painting from approximately 1869, Icarus and Daedalus.

In this intricate painting, the Icarus figure is on the edge of childhood and adulthood. He is being encouraged, however, by an entourage of musicians with blue skin and beaks for mouths.

These creatures are trying to intoxicate the Icarus figure and allow him to fall to his doom.

Despite the ominous feel to this piece, the landscape itself remains equally as idyllic as Spring. Bright contrasting colours portray nature within the painting to be beautiful and radiant.

The protagonist himself is also a perfect example of health and beauty set amongst a flourishing landscape. 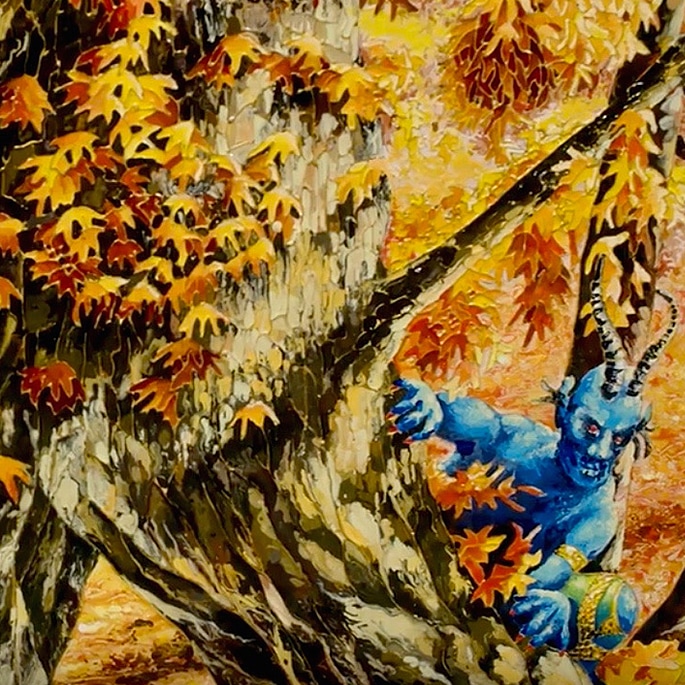 The theme of beautiful landscapes amongst an ominous reality gradually continues into his third piece, Autumn (2019).

In this piece we see the artist, Raqib Shaw, finding shelter in the trunk of a tree within a forest. The forest leaves are painted a spectacularly vivid red and yellow, complemented by Shaw’s use of gold lining.

Frightening blue creatures, similar to those found in Spring, are hiding behind tree branches, however.

They are ready to pounce if the character of Shaw were to leave the safe enclosure of his tree trunk.

If these paintings are based on his childhood memories, perhaps these themes existed during his upbringing.

If so it seems that Shaw had a childhood that was beautiful from a distance. Beautiful like the landscapes depicted in these paintings.

Upon closer examination, however, it seems his memories included significant danger.

Shaw grew up during the Civil War in Kashmir. Perhaps Four Seasons reflects his childhood memories of this. 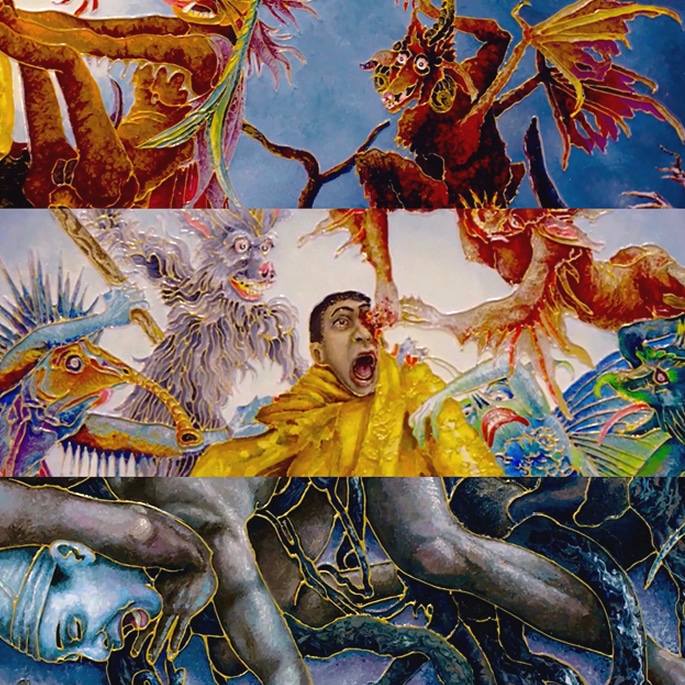 Finally, in Winter (2019) the scene becomes horrific. We see the Shaw character perched upon the top of a dead tree branch. The roots of the tree are composed of grey corpses.

Upon closer examination, some of the bodies are alive and struggling to escape.

Interestingly, they too resemble the artist. Perhaps Shaw wishes to convey the idea that he is attempting some sort of escape from his way of life.

The entire painting is made up of varying shades of grey, black and blue. The Shaw character, however, is depicted in a flamboyant golden gown.

He is surrounded by equally colourful monstrous animals attacking him.

Shaw explains in a video interview:

He then gestures towards the rest of the collection in Four Seasons and explains:

“Then we go through these phases [Summer, Autumn] and we end up here [Winter].”

It is in this painting that the tone of the series shifts so dramatically from ominous to overt horror.

Likewise, the depiction of Kashmiri landscapes also experiences a shift. Gone are the vivid greens, oranges, yellows and pinks from previous pieces in the series. They have been replaced by darkness.

The landscapes no longer look radiant and flourishing, but instead, appear desolate and comfortless.

Ode to the Valley of Wonderment 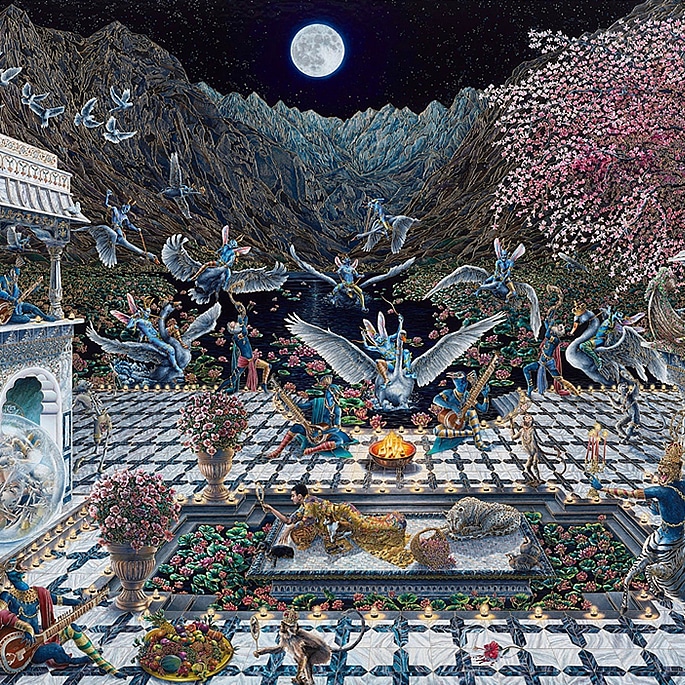 Raqib Shaw’s Landscapes of Kashmir is also made up of the piece Ode to the Valley of Wonderment (2019).

This piece is incredibly intricate. It could easily be cropped into a dozen smaller paintings.

For example, in the bottom centre of the painting, there is a monkey gazing at his own reflection. In the centre left there is a blue half-human half- bird creature playing the drums.

There is so much to see in this painting.

In the centre we see Raqib Shaw being depicted again. This time in a relatively peaceful, serene portrayal. He is, like the monkey below, regarding himself in a mirror.

Behind him is a chaotic scene of creatures flying towards him on giant swans. The protagonist is comforted by his dogs and luxurious surroundings but is calmly unaware of this potential danger.

Here the notorious gold lining in Shaw’s work is particularly impressive in the painted Kashmiri mountainscape.

The centre of the mountainscape is illuminated by a beautiful moon. It bringing us back to a more idyllic depiction of Kashmir.

A Kashmir that is once more beautiful and flourishing, aided by the blooming reappearance of cherry blossom.

Allegory of Memories through Monozukuri 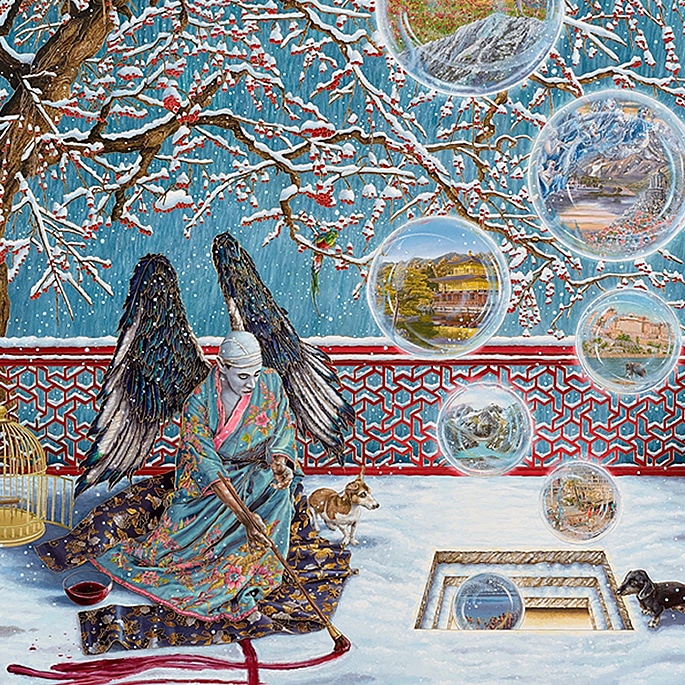 Here we see Shaw as the protagonist once again. He is painting with a shade of red curiously similar to that of blood.

The process of this piece was intensive.

It began with a photo shoot of Raqib Shaw, which drew inspiration for pencil sketches. Eventually, these sketches were translated into the painting found here.

Then there is the second contrast. The Shaw character is dressed in colourful clothes, but his hair, tucked away in white cloth, appears unstyled.

A third contradiction can be found when examining the bubble-like memories. Beautiful memories are painted, but all of them are sinking into trap never to be visited again.

Here it appears that the artist, now in the process of manufacturing his own work, is reminiscing in his memories of Kashmir.

Every bubble in this piece represents an idyllic landscape. Not all, however, resemble Kashmir. One, for example, looks like a Japanese temple.

As an artist who draws inspiration largely from Japan amongst other regions, this painting contrasts the new with the old. We see Shaw’s childhood in Kashmir against his current inspirations as an artist.

Perhaps painting these bubbles of landscapes sinking into a trap is Shaw’s way of conveying that he does not wish for these memories to be lost.

Shaw’s depictions of Kashmir in Landscapes of Kashmir (2019) are mixed. As are all memories.

What all these pieces have in common is their intricate detail. They are also all able to provide a curious insight into the mind and background of Raqib Shaw.

Shaw shows us a variety of landscapes, from snow-dusted trees to idyllic mountainscapes to vivid blue rivers. Each piece allows us to reflect on our perceptions of Kashmir and memories of our own childhood landscapes.

Ciara is a Liberal Arts graduate who loves to read, write, and travel. She’s interested in history, migration and international relations. Her hobbies include photography and making the perfect iced coffee. Her motto is “stay curious.”
15 Top Pakistani English Novels You Must Read
Brides marry Groom’s Sister in these Gujarat Villages