While India is famed for traditional artwork, a new generation of artists are making their mark. Here are seven popular contemporary Indian artists.

A new generation of contemporary Indian artists is becoming much more sought after than traditionalists.

Art from the Indian subcontinent has gained popularity over the last decade.

Prices for contemporary artwork is reaching millions of pounds at auction.

The most renowned artists in India are still modernist pioneers such as Gaitonde, Souza and Mehta.

Their artwork is among some of the most expensive Indian paintings sold at auction.

Although they are the most well-known artists in India, younger generations of artists are much more sought after on the global stage.

Their methods of producing are like no other and are showcased in a variety of different media.

We explore seven of the most popular contemporary Indian artists and some of their works, which have captured people’s imaginations. 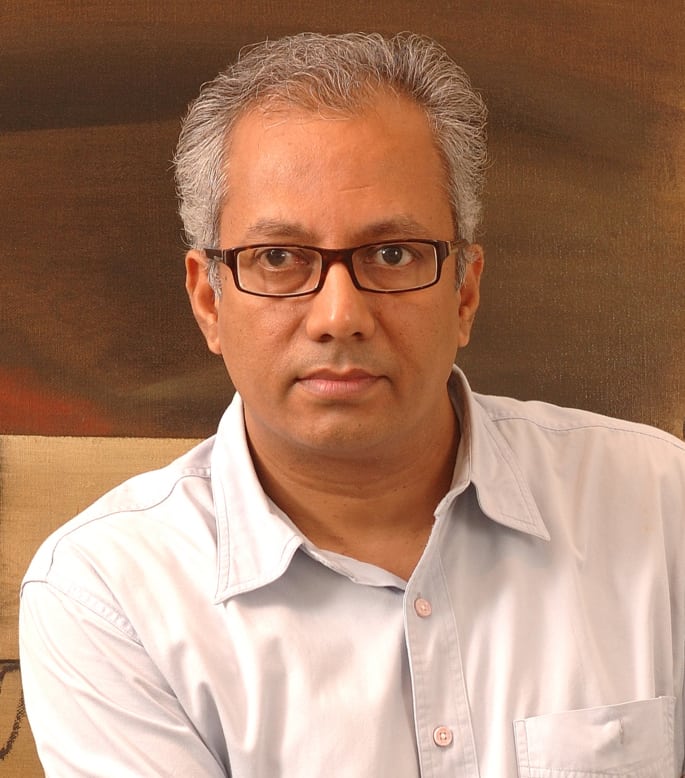 Mumbai born Atul Dodiya is among the most popular contemporary Indian artists.

His work is also sought after by art enthusiasts.

Dodiya’s paintings are in the same auctions as some of the most important modernists like Tyeb Mehta and Francis Newton Souza.

They are responsible for some of India’s most famous paintings, which have become instantly recognisable among art fanatics.

Dodiya’s paintings take influence from these artists and many others but he re-interprets their traditional style through a contemporary perspective.

His artwork engages with both Indian political and art history in a way which will last in the memory of those who view his work. 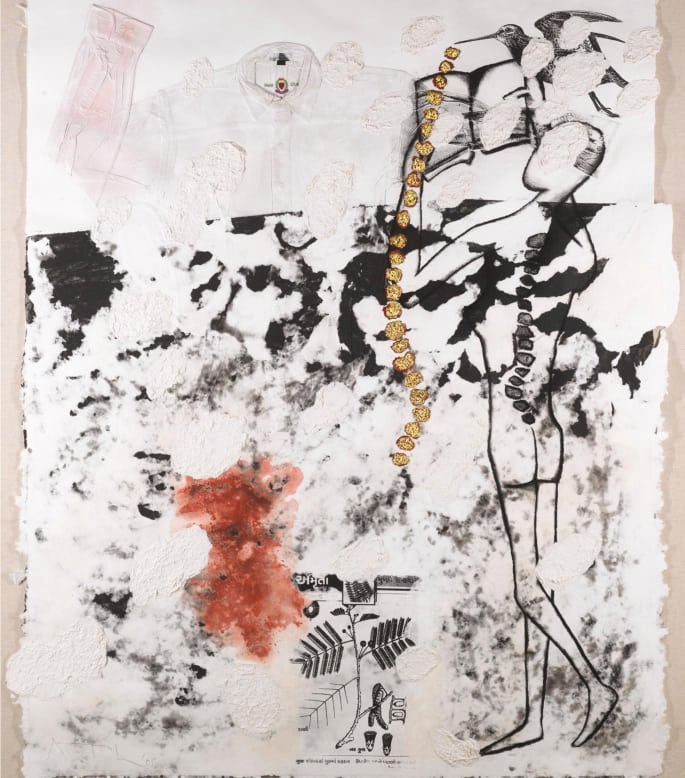 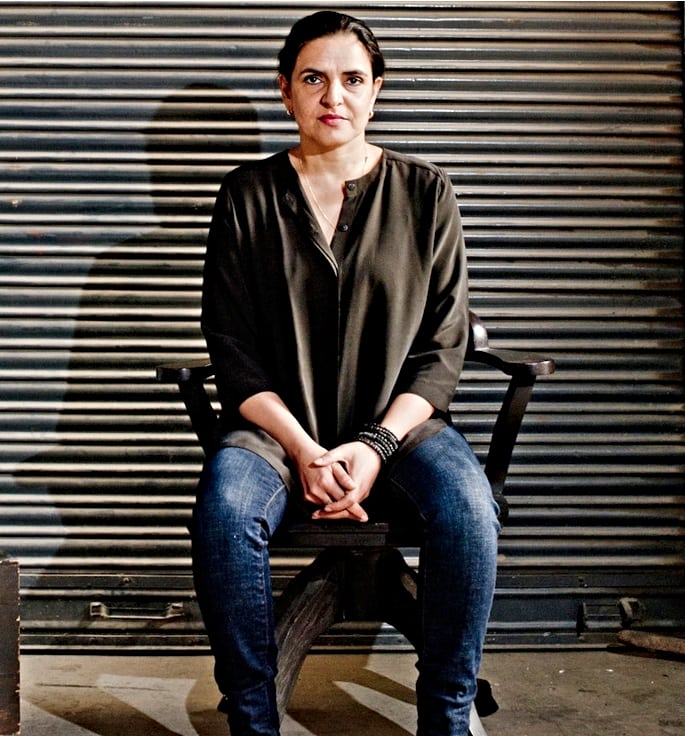 London-born Bharti Kher moved to New Delhi to fully commit to her role as a contemporary artist.

Her work has seen her become one of the most popular contemporary Indian artists.

Kher’s style features a combination of painting, sculpturing and installation.

She often incorporates bindis, the popular forehead decoration worn by Indian women, into her work.

They are mainly of animals and nature.

Her work has received success at global auctions.

Bharti Kher became the top-selling Indian female artist when her piece ‘The Skin Speaks a Language Not Its Own’ sold for £1.1 million (Rs. 103 Crores).

It sold at Sotheby’s London auction in 2010 and surpassed her husband Subodh Gupta’s selling record of £1 million (Rs. 94 Crores). 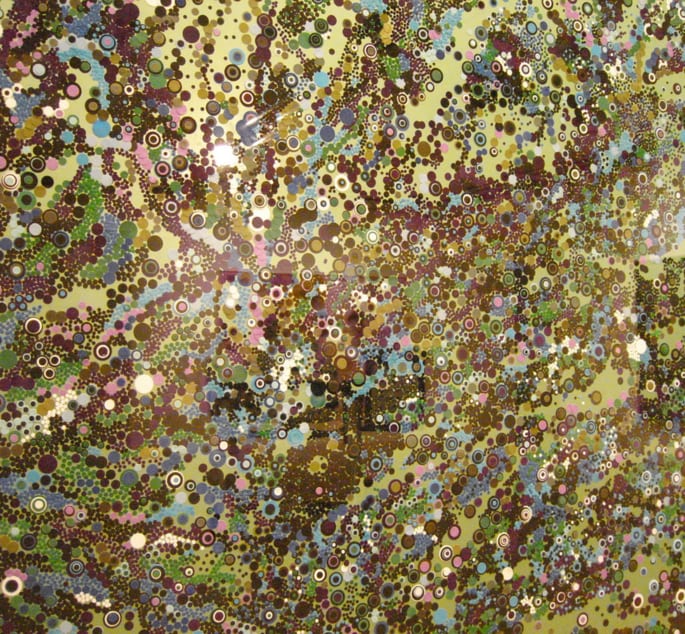 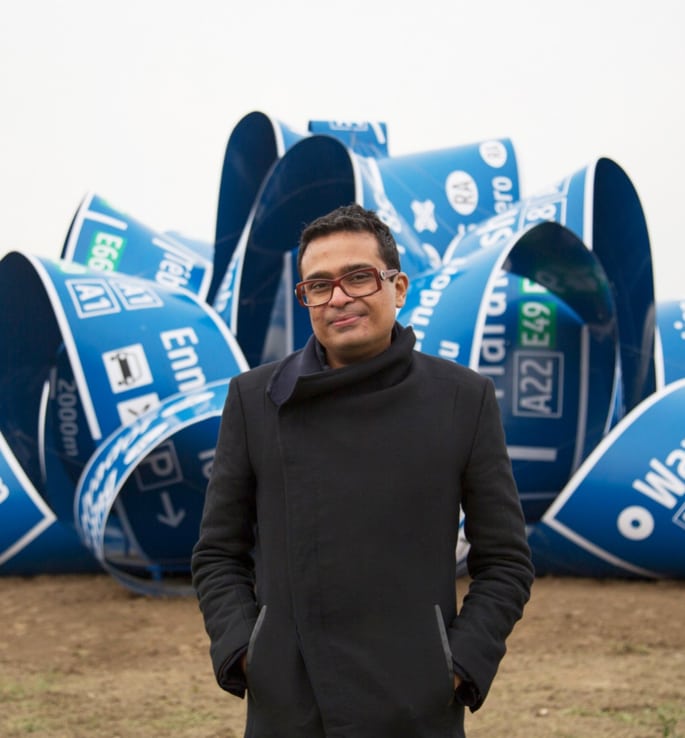 The already established contemporary artist creates paintings, sculptures and photography, to name a few of his art formats.

A lot of Kallat’s work is based on his encounters with the multi-sensory environment of Mumbai as well as the events which have contributed to it’s making.

His style highlights his concern for the socio-political history of the city.

Kallat has referenced the ironies of migrant worker’s lives and labourer’s in the cities of India.

Kallat’s message within his art has increased his international reputation, especially during Sotheby’s New York auction in 2007.

It was the first dedicated sale of Indian contemporary art where Kallat’s auction record was £55,000 (Rs. 55 Lakhs). 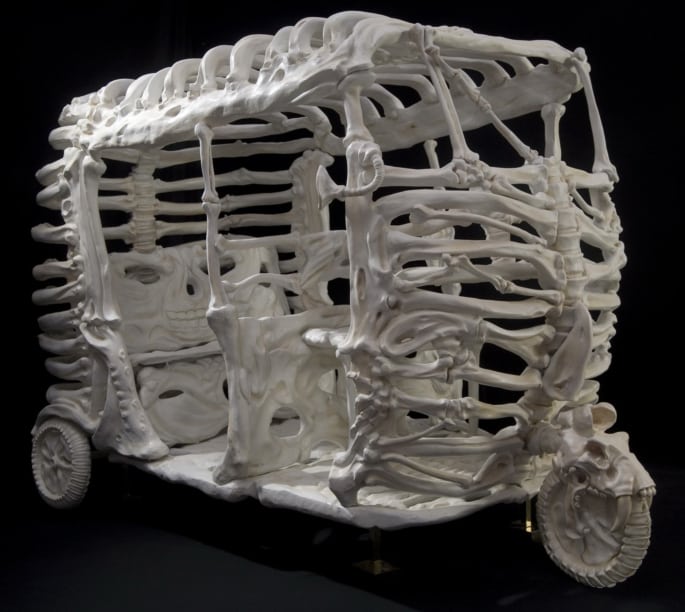 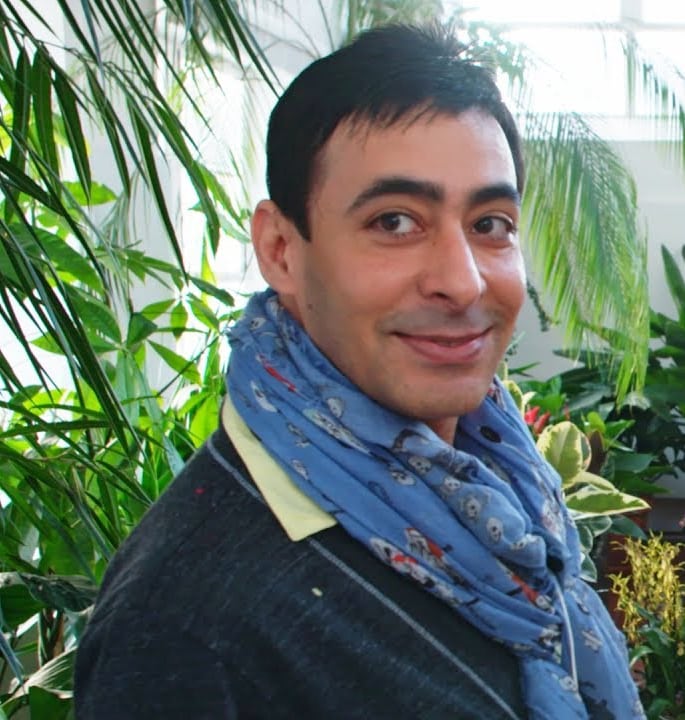 The London-based artist shot to international fame at 33.

Before that, Shaw had little recognition outside of London.

Shaw is known for his very detailed paintings of imagined paradises on jewel-like surfaces.

A typical painting by Shaw has many stages.

It begins with drawings on paper, which then is transferred onto a panel.

A stained-glass liner is then applied. The piece is then finished with crystals and glitter for extra ornamentation.

His works echo the styles of European painters Holbein and Bosch.

Shaw brings into the modern day by incorporating different sources.

This includes mythology, poetry, literature and history to name a few of his inspirations.

The long process to create a piece of art shows Shaw’s dedication and his recognition as one of the best Indian contemporary artists is deserved. 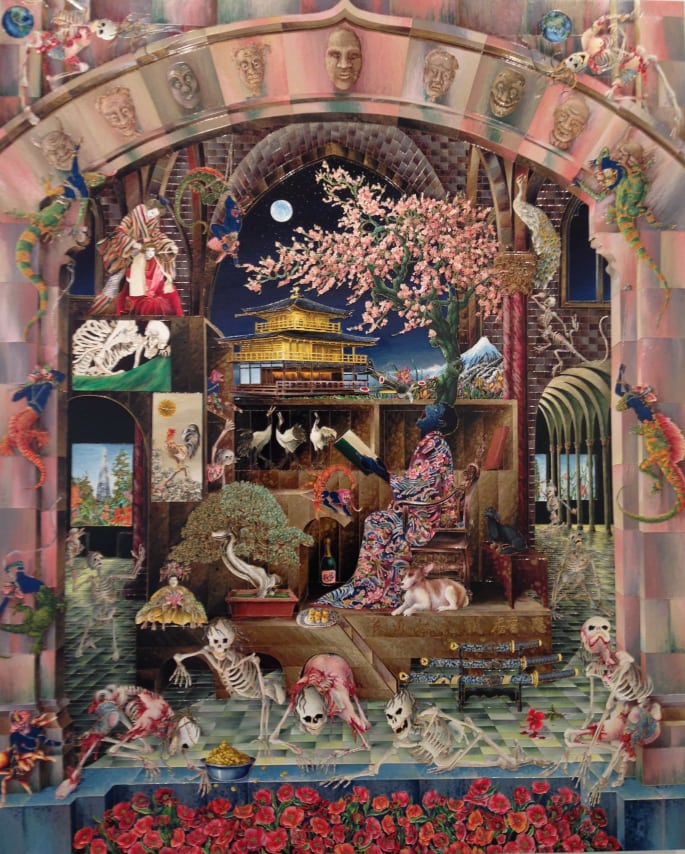 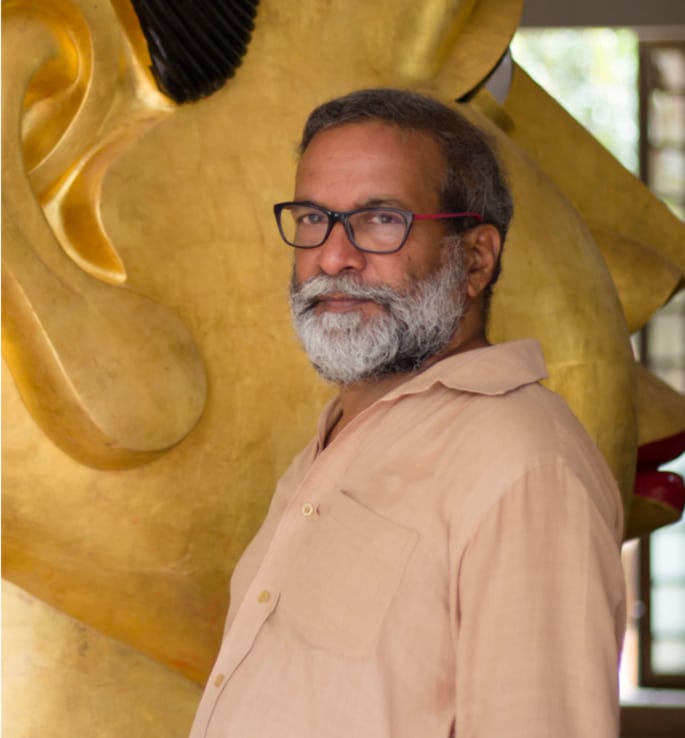 One of the most recognised styles of contemporary art, Reddy’s works are some which stand out massively.

His giant female heads fuse together folk sensibilities with the traditions of Hindu sculpture.

They are decorated in bright colours and usually have wide-open eyes and bold facial features.

His intention is to stage the multifaceted femininity that is once rooted in the past whilst embracing the contemporary world.

Reddy’s inspiration comes from different sources such as ancient Indian and African sculptures.

His works are extremely popular on the global stage. 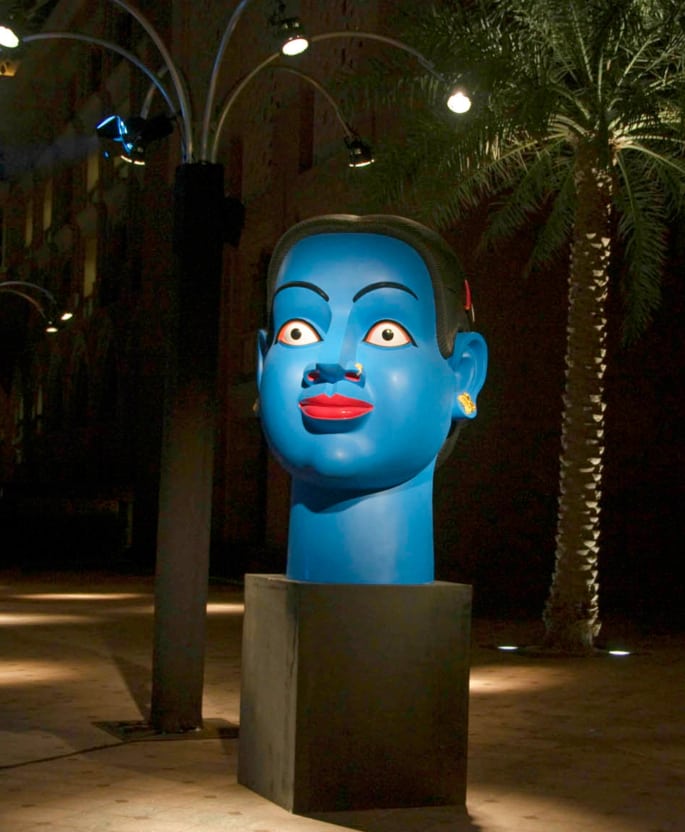 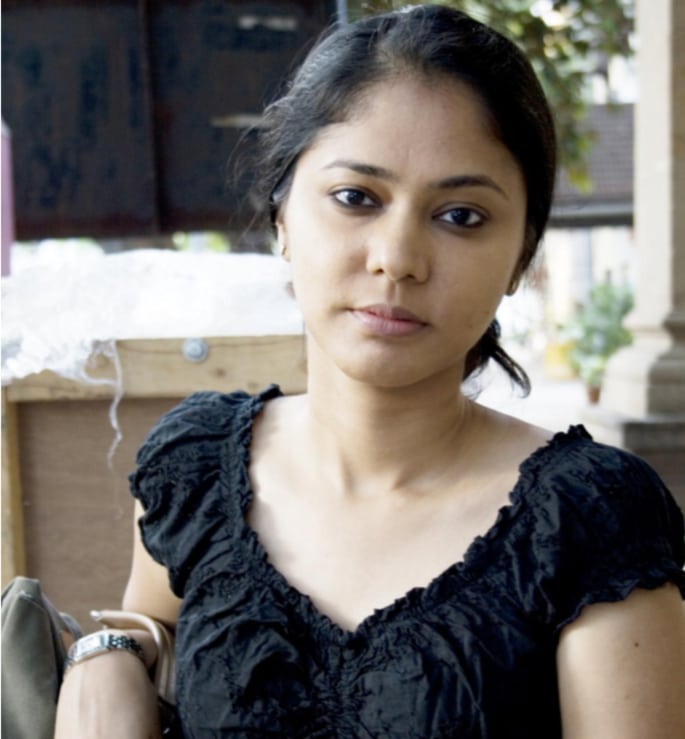 Shilpa Gupta has quickly risen to stardom due to her multimedia artforms which have wowed worldwide audiences.

She is a new media artist who has become very popular for addressing different barriers in India in different ways, especially video.

They include gender and social class barriers.

Her interests lie in human perception and how information is transmitted in everyday life, which is shown in her work.

Gupta’s work has received international recognition at auction as some of her pieces have reached prices of £38,000 (Rs. 30 Lakhs).

She is highly sought after and has worked with top art galleries and makes appearances for prestigious contemporary art events.

Despite only being 42, she is well-established as a contemporary Indian artist.

She is popular with both private and public collections. 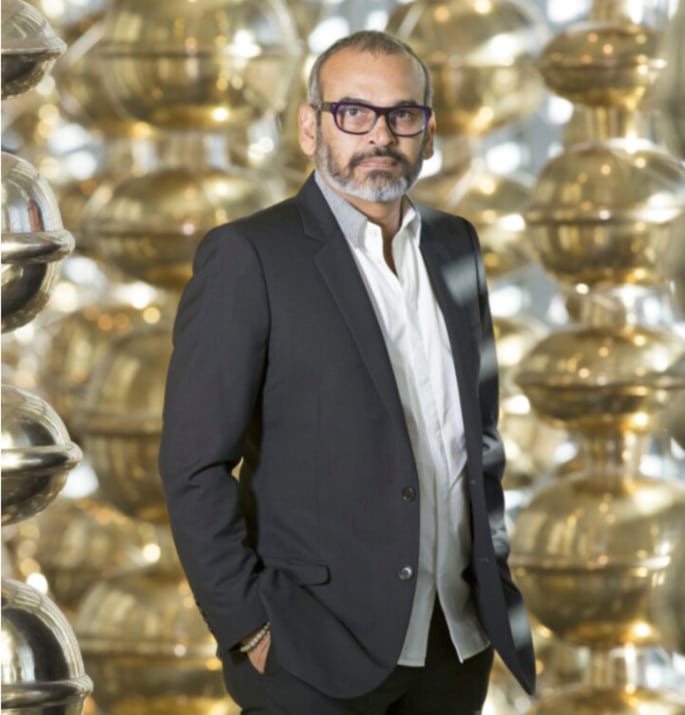 The husband of Bharti Kher and the most popular contemporary Indian artist.

Gupta is known for incorporating everyday objects with are synonymous with India.

These supposedly ordinary items help to make sculptures which reflects the economic transformation of India.

They also relate to Gupta’s own life and memories.

The icons of everyday Indian life are transformed into artworks that are globally recognised.

He originally began with paintings but soon moved into a variety of different media such as sculptures.

Gupta’s art style has gained him international popularity at auctions.

Although he just uses simple things as his inspiration, the imagination has made Gupta into the most popular contemporary Indian artist. 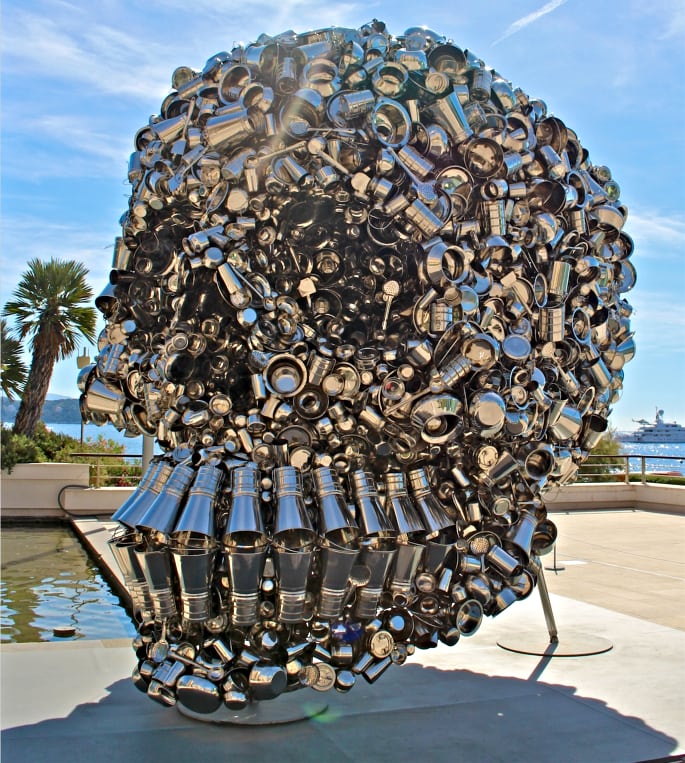 Contemporary Indian art is on the rise as a result of new techniques incorporated to create artwork.

All seven artists take unique approaches when creating their art.

Their work is something which carries a deeper meaning, usually addressing India’s wider society.

This is all through a piece of art, which are becoming more popular among art aficionados.