There is an influx of modern British Asian artists who are adding a cultural twist to the artistic industry. We look at the top 5 to explore.

"The intent behind each piece is to educate"

There are a plethora of emerging and established contemporary British Asian artists redefining the artistic landscape.

These figures dabble in a range of creative lanes such as drawings, paintings and vibrant illustrations.

However, all of their pieces ooze with the same hypnotic imagination and cultural aesthetics.

This is brilliant as it embraces Desi artistry and provides a better representation for British Asian artists overall.

Although, the creative scope for British Asians has always lacked the same enthusiasm given to more traditional channels such as medicine or the sciences.

But, the celebration and upwards trajectory of Desi artists is more prominent than ever before.

Therefore, it is only right that we take a look at the best British Asian artists to keep your eye on. 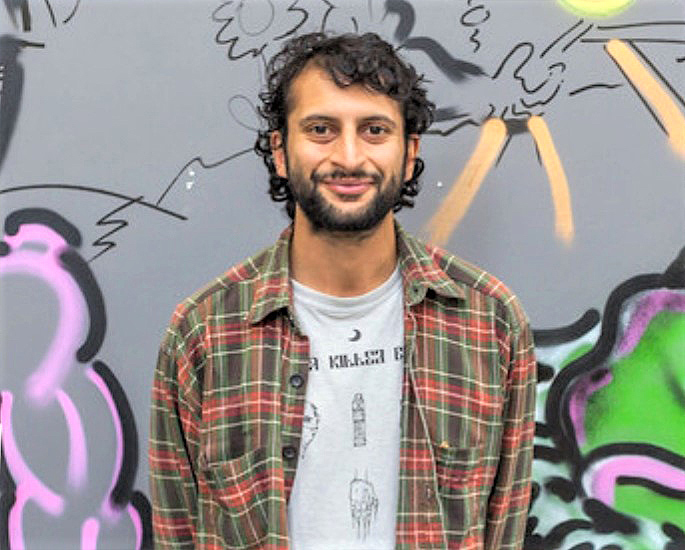 Born in 1985, Hardeep Pandhal is a mesmerising British Asian artist from Birmingham, UK.

The Glasgow (Scotland) based-creator and his fantastic animations, illustrations and cinematic work are gaining notoriety.

His work is based upon cultural identity, mixing his British and Punjabi cultures to depict racism, satire and mythology. Hardeep’s pieces don’t symbolise the history of South Asians in a typical way.

Instead, using a psychedelic and comical approach, he moulds a narrative that pokes fun at traditional views on being British Asian.

He aims to push the viewer into a state of self-reflection. Whether they are British, South Asian, or from another background, his art is thought-provoking and fresh.

This is enhanced through Hardeep’s short animations that are superbly lit with colour.

These videos use the artist’s sketches and rap to form a creative account of Indian heritage and experiences.

Interestingly, one of the main reasons why Hardeep decided to have such a focus on identity was to become closer with his mother.

His mother spoke Punjabi but Hardeep couldn’t. So, he used art as a way of communicating with her.

His mother knits different garments, which Hardeep then embroiders with portraits. Anyone from rapper 2Pac to Indian figures can make an appearance on the knitwear.

Besides building a bond between the pair, it gave Hardeep a means of connecting with his mother without language. 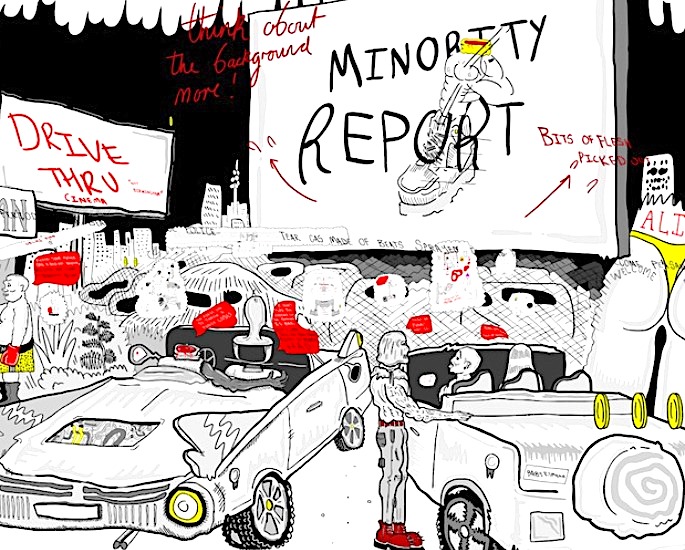 This is exactly what is portrayed through his illustrations. He aims to connect with the audience without speaking.

Notable works such as Goonda Life and A Nightmare on BAME Street have caught the attention of many galleries and organisations.

Therefore, it comes as no surprise that the powerful artist has been nominated for many awards.

Hardeep’s formidable run shows no signs of slowing down as he looks to carry on innovating his craft for future British Asian artists. 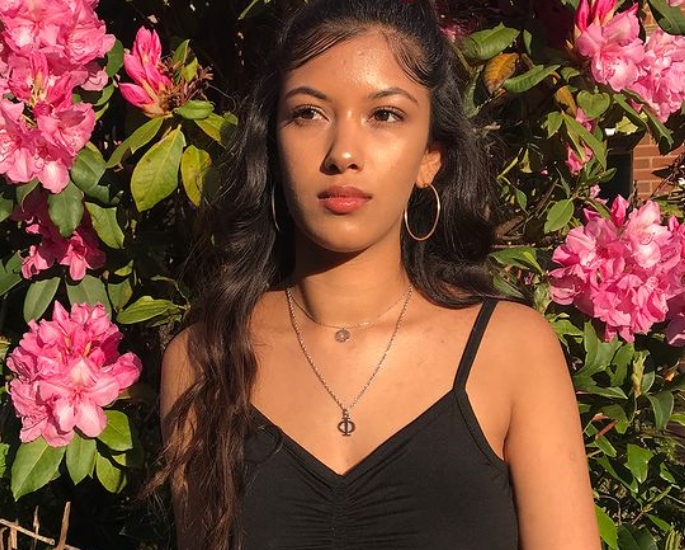 British Indian artist, Shaw, is a captivating illustrator and graphic designer who aims to represent a diverse society through art.

The London-based creator does extremely well in forming simplistic yet celebratory images that promote Desi culture, body positivity and heritage.

Although her real name is Rajvi, the artist uses the alias ‘Shaw’ to limit judgements that can come with one’s name.

In 2020, Shaw spoke to the empowering, Asian Woman Festival, highlighting this point about her name:

“It doesn’t let people judge me upon first impression and you can’t assume anything from it eg. my gender, age, religion, race etc.”

“I like that it has a bit of mystery to it.”

Although no matter what name Shaw uses, her magical artwork speaks for itself.

Having started drawing as a child in the waiting room of her mother’s beautician practice, The qualities of Shaw have gone from strength to strength.

Shaw’s illustrations capture the idea of representation, which stem from her anguish at not seeing enough of ‘herself’ when growing up:

“The characters I saw that were brown, were heavily stereotyped and made me push away from my culture rather than accept it.

“The characters that I looked up to didn’t look like me and this lead to a lot of identity issues and a strong belief that Eurocentric features were more beautiful than my own.”

This incredible sense of awareness and foundation has given Shaw’s work a deserving spotlight. 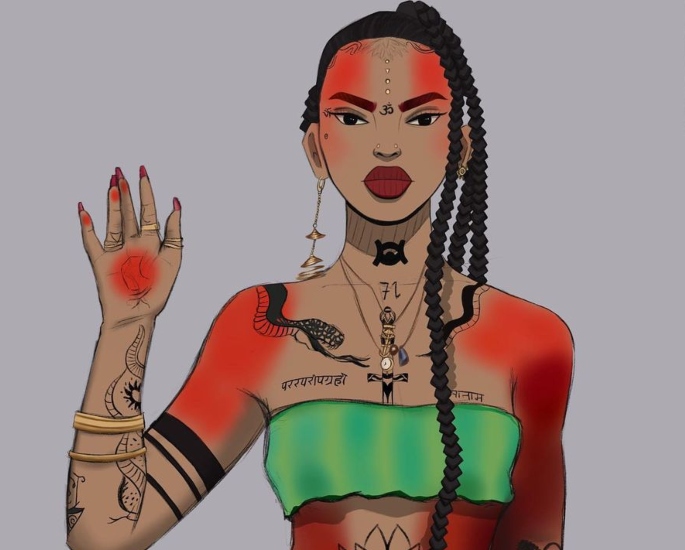 Shaw has also applied her magnificent skillset to showcase other cultures and women of colour. This magnifies how she wants to redefine artistic representation.

Her use of tonal colours, sharp linework and robust silhouettes puts South Asian culture within a modern setting at the forefront.

This has enabled the starlet to deservedly gather over 4000 followers on Instagram while gaining notoriety from the wider artistic community. 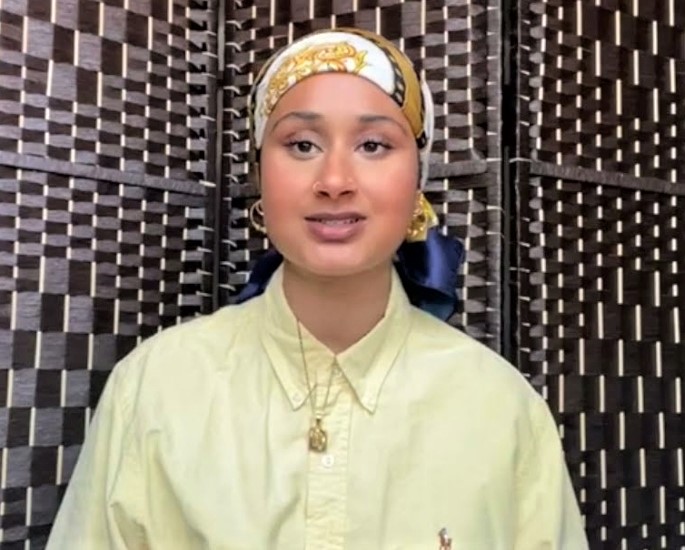 Haseebah Ali is a British Asian artist from Birmingham, UK. What makes Haseebah such a wonderful illustrator is her ability to use traditional techniques for more contemporary art.

Admittedly, the printmaker wants to go on a journey with her pieces.

Her love for lino and oil paintings has allowed Haseebah to appreciate the long process to create the final project.

Focusing on cultural themes, political circumstances and society, her work is focused on educating – both herself and the audience.

So, her illustrations are not just forms of expression, but a social commentary of what is happening in the world at that specific time.

This gives the pieces of Haseebah a certain spellbinding richness.

For example, her 2020 self-portrait for the youth arts organisation, The GAP, captured a juxtaposition of freedom and isolation during the UK’s Covid-19 lockdown.

The gripping painting embodied an abundance of emotions, whilst showcasing the mindset of many people during that time. 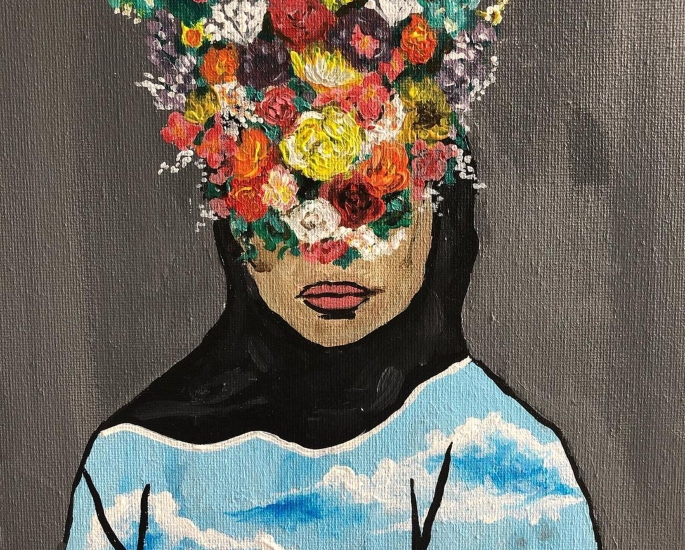 Impressively, Haseebah only graduated in 2018 from Birmingham City University in visual communication illustration.

In a short space of time, the artist has already stamped her mark on multiple exhibitions. This was done more so with her Syrie collection.

The Royal Birmingham Society of Artists gallery described the motivation behind these pieces, stating:

“She [Haseebah] discovered that many people either did not know about the crisis or were interpreting media narratives with negativity.

“Ali, therefore, created a body of work that reflects an empathetic view of the situation.”

“Focusing on the displacement of people and the resulting emotional turmoil caused by displacement, rather than the political context.”

It was this vivid portrayal of a complex matter that Haseebah did so with imagination and anguish. These exact qualities are what make the Birmingham-based artist such a poignant figure.

Having gone on to work with mega-corporations like WaterAid in 2021, the British Asian artist will surely see more future triumphs. 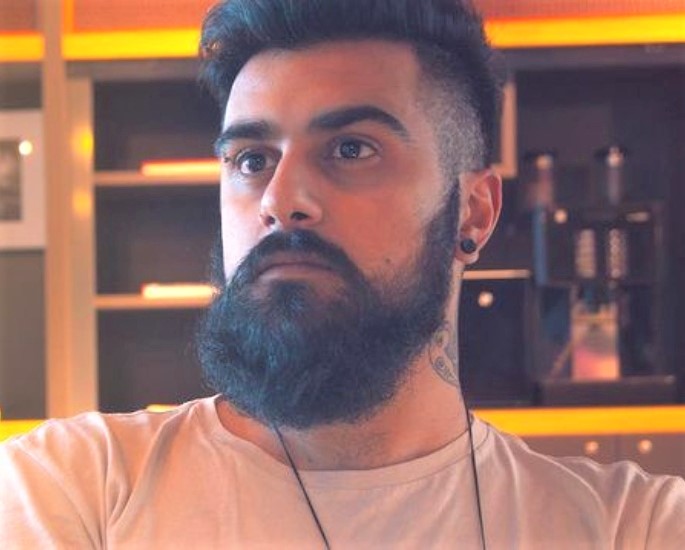 Vik Kainth is a groundbreaking artist from East London who is using his majestic skills to innovate the way we engage with art.

Although he takes inspiration from artists like David Carson and Cristiano Sequeira, his pieces are entirely original.

He uses bright hues of colour, curvaceous lines and Desi elements to uphold the authenticity of South Asian culture.

An avid creator of classical Indian art, Vik uses modern platforms to evolve the way we perceive his work. It is the intricacy and geometric qualities in his artwork that are admired ferociously on digital mediums.

The creativity and realism feature in his illustrations, as are the neon streams and settings, which transcend his catalogue.

Pieces such as Squat Palace show a South Asian woman in traditional attire getting ready for a heavy squat.

Whereas, paintings like Chori Chori, Chupke Chupke depict an exhausted maharani smoking against a city backdrop. 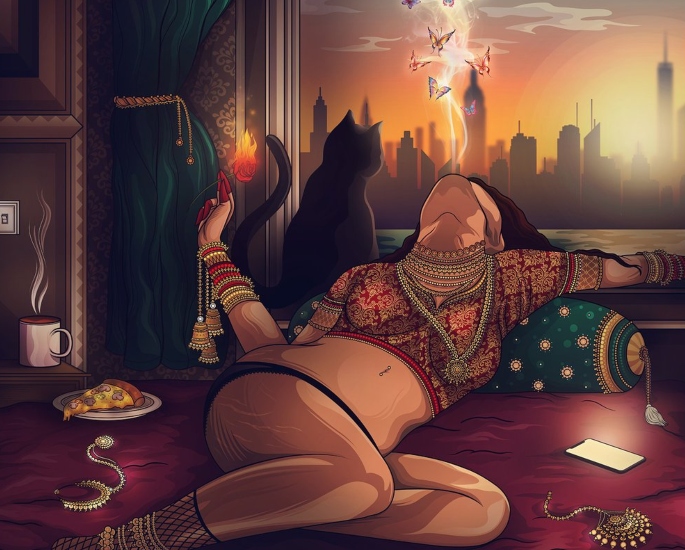 Talking about this specifically on his Instagram, Vik mentions we’re:

“Living amongst a blinded generation who tend to assume everything is amazing and perfect 24/7. But do they ever understand or believe that real mental struggles exist?”

Here, the artist beautifully encompasses what his artwork signifies – the strength of perception. It is this ideology that has served as the basis of all of Vik’s work.

He wants to create traditional artwork that has a visually appealing aspect in a gallery but is just as crisp on a tablet or smartphone.

However, what’s more, appealing about Vik is how he shows his massive Instagram following on the exact artistic process he goes through.

His powerful time-lapses allow young artists to see the detail, complexity and dedication that go into producing a masterpiece.

This is vital in motivating the next collection of Desi artists, with Vik serving as a catalyst for those looking to utilise their creativity.

Again, this emphasises how the British Asian artist is breaking down barriers. A lot of South Asian artists are reluctant in exploring more sexual pieces, however, why should these areas still be taboo?

The inclusion of these topics within South Asian artwork is needed. It challenges outdated views whilst promoting inclusivity and free exploration for budding artists.

Having such an exceptional stance on art and helping others, Vik is a tremendous addition to British Asian artists.

He continues to broaden the artistic scope while forming awe-inspiring pieces that capture the elegance of South Asia in the most imaginative way. 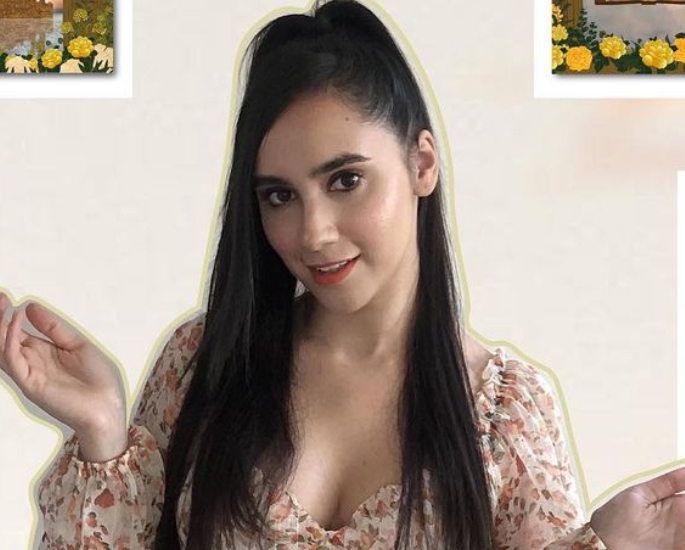 Gaby Gohlar is a British Asian creative who prides herself on expanding communities past patriarchal mentalities.

An avid believer in challenging old ideologies, Gaby hopes her illustrations describe the world as we see it.

This includes self-reflection, sexuality and traditions. The creator dives into this further on her website, revealing:

“The intent behind each piece is to educate, learn, encourage and normalise ‘taboo’ discussions to create a supportive community.

“Therefore, posing a comparison between South Asian ideologies and its ability to be accepted today can begin to initiate tough conversations.”

The striking skillset of Gaby is clearly visible in all of her creations.

From Bollywood marriages to India’s farmer’s protest, the emotion, vibrancy and detail she achieves are incredible.

Not forgetting her unique handwork allows each element of her paintings to be individually and collectively compelling.

Although both figures are prominent in the piece, the subdued addition of a nude woman in the background reflects homosexuality.

Also, the fact that both women are staring into each other’s eyes pushes the aura of intense affection.

Her intuition of mixing the correct colours, capturing the emotion of her topic whilst still igniting conversation is exhilarating. 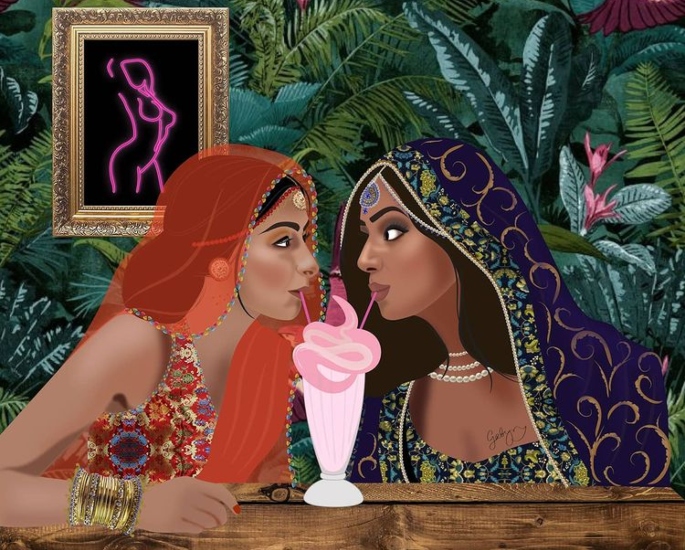 The mesmerising pieces of Gaby are certainly sending shockwaves throughout the industry, leaving fans and artists stunned.

But, she has also featured in the likes of the J’aipur Contemporary Exhibition, Brown Sugar Podcast and Product of Culture collective.

Additionally, Gaby’s expertise has allowed her to infiltrate product design with her pictures.

Plastered on canvases, notebooks and greeting cards, Gaby does not lack when it comes to progress.

Her success is also an ode to the Desi work ethic and her fearlessness when it comes to thriving in an underrepresented area.

Although her career is only getting started, she is still on a formidable run of showcasing the creativity of British Asian artists.

With such beautiful, original and cultural concepts, these creators are definitely expanding the artistic space. Their pieces ooze with authenticity, vividness and passion.

Whilst encompassing all the elements that make South Asia so intense, these illustrators’ modern techniques is a welcomed change to art.

It enables them to highlight the wonders of Desi communities, fashion and history in a refreshing and engaging way.

So, it is exciting to see how the next generation of British Asian artists embraces these influential figures.

There is no doubt that the impact of these artists will help them transcend the standard of South Asian illustrations.