"I love the viewer to become the artist of my work."

Inkquisitive a.k.a Amandeep Singh is renowned for his bold artwork to portray popular culture and global issues.

Keeping his finger on the pulse, Inkquisitive joined with the world’s leading streaming service, Netflix, to depict the main character from the hit movie The White Tiger.

Through his creativity, Inkquisitive innovatively uses bright colours and vivid images to relay the story of Balram from The White Tiger.

Inkquisitive depicts Balram, the main character from The White Tiger, who grew up in poverty and manages to work his way into becoming a driver for a rich family. Eventually, Balram finds his way to success.

Using colours and creating eye-catching images, Inkquisitive painted his representation of Balram and recreated Balram’s car from the movie.

He completed the images with a tiger at the top of the car to illustrate Balram’s accomplished stance in society at the end.

Inkquisitive “loved” the theme of the underdog and “hustle amongst the wider social context of India.” 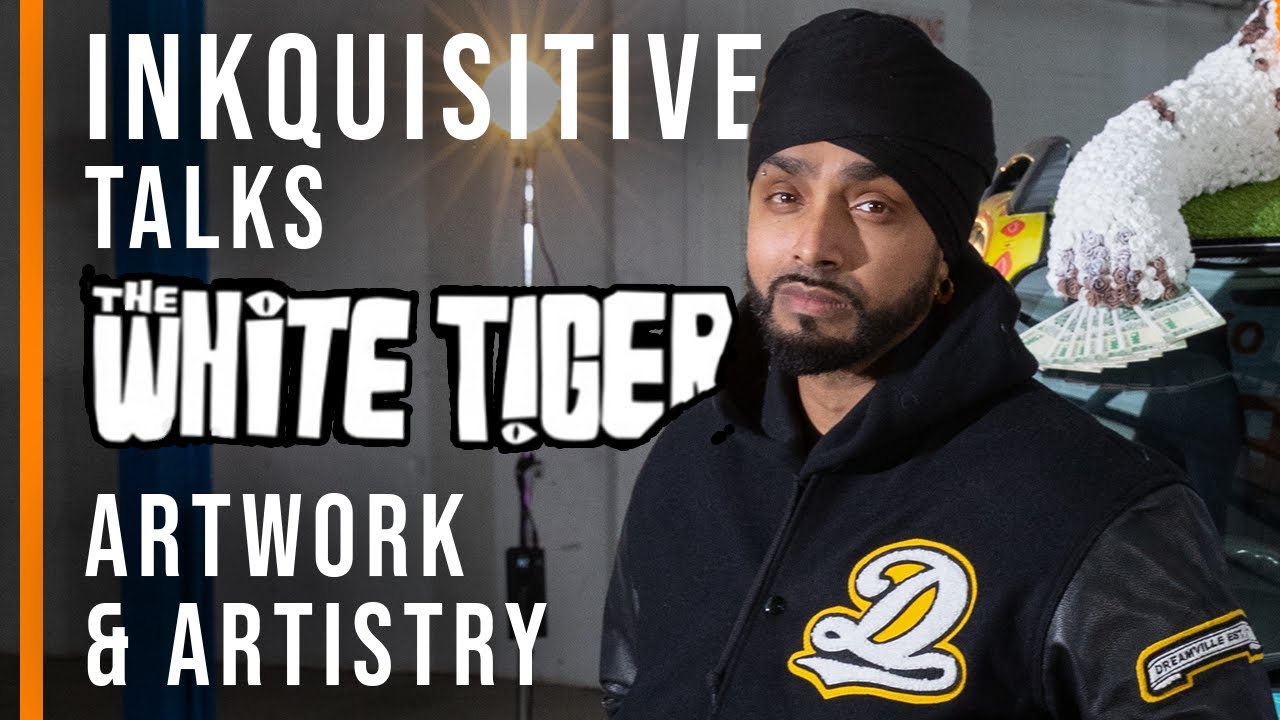 Inkquisitive’s collaboration with Netflix is symbolic. He is enthusiastic about the project:

“It’s great that Netflix is giving British Asian artists a platform to share their work.”

The partnership with Netflix came at the perfect time for Inkquisitive who is renowned for his work. It has been a decade since he embarked on his artistic ventures.

The White Tiger has been longlisted for seven BAFTA awards. It is another achievement for the incredible artist who already has fans across the globe.

Inkquisitive speaks exclusively with DESIblitz about The White Tiger and his artistry. 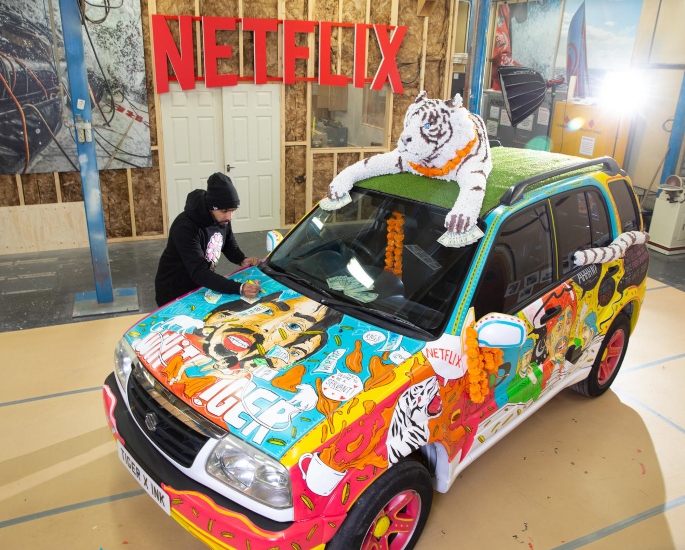 Being approached for this meaningful project in creating artwork for The White Tiger immediately had Inkquisitive’s artistic thoughts flowing.

The artist explains his first thought when hearing The White Tiger:

“Even when I was approached. It was colours.”

“How am I going to make this bright?”

When it comes to selecting colours for his work, Inkquisitive doesn’t follow any rules or routines. However, it is very important for him to not overthink his creations.

He doesn’t preplan his colours or creations. So, there is no mismatch between his imagination and outcome.

Inkquisitive prefers to allow his artistry to effuse naturally, saying:

“I’m very much more focused on showcasing something more natural and letting my hand go for a walk.”

What is essential for Inkquisitive is making his work striking. He believes it is a way to get people engaged in his art.

Contrasting colours is one way to achieve this, particularly “blending brights and dark colours.”

Another contrast that Inkquisitive experienced whilst working on The White Tiger project was that he was painting a car. Learning how to adapt he says:

“I had to completely change it up to car paint but we managed to make it happen.” 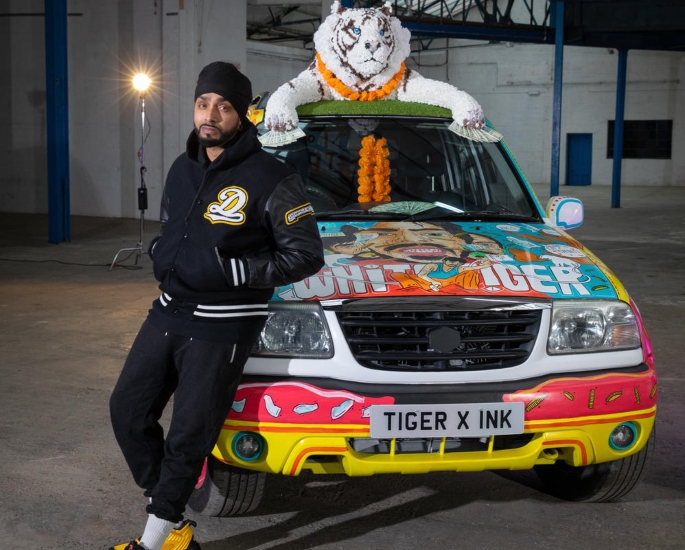 Though the Indian culture of The White Tiger was something that Inkquisitive was already passionate about, he “loves using Indian inks.”

This isn’t something new for the amazing artist, as he grew up watching his father illustrate calligraphy as simplistically as putting “pen to the nib.”

This sparked Inkquisitive’s passion for art and benefitted his work for The White Tiger.

This time, Inkquisitive’s art was depicted on a car. However, he reveals memories from his childhood, stating:

“I loved that idea of something leaking onto a piece of paper and then blending.”

The Indian inspiration from his childhood led him to The White Tiger on the decade anniversary of his artistry.

Balram’s story is creatively depicted on the car. The “complete taxi” is based on Balram and his evolution in The White Tiger.

Balram is rhythmically illustrated on the vehicle. The left-hand side of the car exhibits Balram’s background “coming from rags.”

However, skillfully crafted is a holistic view for observers of Inkquisitive’s art. The other side of the car symbolises “the riches.”

Encircling the car to gain a complete perspective, the evolution of Balram’s story is revealed. Inkquisitive describes how he communicates his art with viewers:

“I love engaging my audience into a story within a story.”

In this way, he illustrates on the car, Balram’s complete journey from poverty to financial success.

The prospect of completing and presenting an immaculate project was absorbing.

Inkquisitive was given seven days to complete his intricate artwork. He managed to complete it in four-and-a-half days.

Putting in long days, he says he forgot “everything else.”  He was dedicated to his prolific work and enjoyed seeing it “building every day.”

Inkquisive’s masterpiece is clearly a product of hard work and creativity. Balram’s character is developed through different angles and viewpoints of the car. 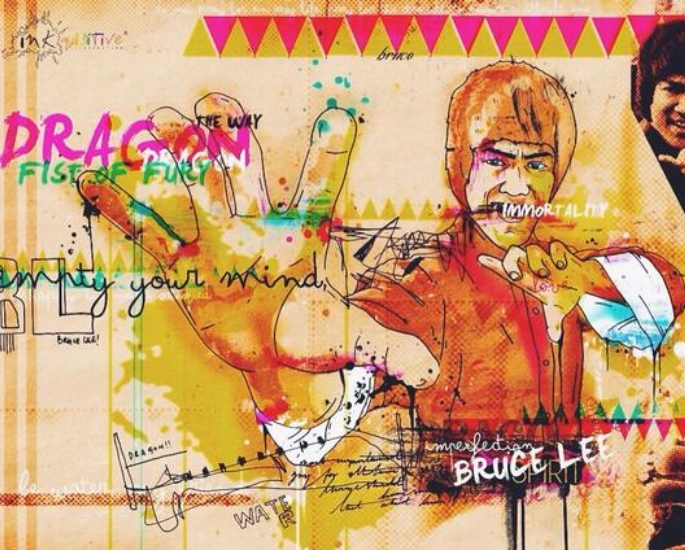 With an extensive art portfolio, it is intriguing how Inkquisitive started his career. The poignant, Bruce Lee, was a driving force for Inkquisitive.

Bruce Lee was one of his first paintings. Inkquisitive’s work of perfection impressed the right people as he recalls:

“His daughter happened to see it and she shared it.”

Clearly, Inkquisitive’s Bruce Lee painting was a stroke of genius.

Inkquisitive also has a clear Desi influence. He remembers his creative style forming due to his piece on Indian freedom fighter, Bhagat Singh.

His showpiece was a hit and “got spread everywhere.”

“And that started raising alarm bells. Who’s this guy?”

From there, Inkquisitive’s name spread and he became a force to be reckoned with in the creative industry.

Behind this great artist are many muses. He is a fan of fellow artist, Basquiat.

Inkquisitive divulges the little-known fact that he is also a children’s illustrator. His secret passion is embossed on him.

He has a golden ticket Wonka tattoo on his arm.

This young artist believes in going beyond the realms of reality and exploring the imaginary. He encourages looking beyond the horizons sensibilities:

“Why do we have to live in what we have? There’s so much more to it.”

Accordingly, Inkquisitive implements this into his work.  In-line with his global outlook, Inquisitive doesn’t “shy away from speaking the truth” through his artistry.

He “loves a subliminal message” and likes his audience to create their own interpretations of his creations:

“I love the viewer to become the artist of my work.”

Inquisitive’s artistic vision expands beyond the audience looking at his work. He places the viewing in the artistic position:

“My ambition is to create other artists looking at my work, making them the artists.”

Inkquisitive’s achievements are truly inspirational and he offers advice to British Asians seeking a breakthrough in the world of art.

Consistency is key, according to Inkquisitive. Being grateful for his heritage, he says:

“I’m very grateful to be, number one, Asian.”

He adds that he is fortunate to be “riding the flag and holding it as a representation for South Asians.”

Inkquisitive emphasises that passion for your creative work is essential. He encourages South Asians that it’s about “standing for your right.”

Inkquisitive draws on his own experiences over ten years of his artistry:

“I’ve been put down so many times in the ten years doing this. I could have stopped in the first two years. I believe in my work. I have a calling.”

Inkquisitive speaks of the significance of individuality. He suggests that upcoming South Asian artists ask themselves how badly they want to succeed in the creative industry.

Sharing three Desi things about himself, of which two were about food, he told us:

“I’m a strong believer in Bhangra. 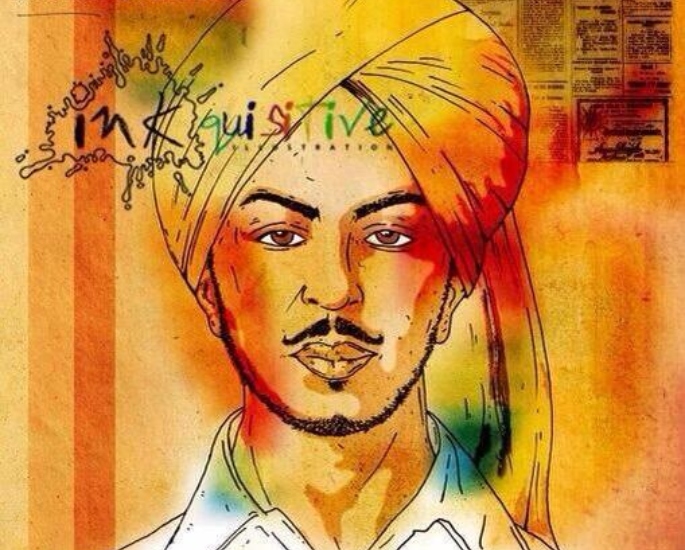 Inkquisitive is an inspiration for his symbolic art. This includes the collaboration with Netflix for The White Tiger and his viral Bruce Lee work.

His ten years in the art world have been filled with achievements and perseverance.

With a global vision and firm belief in looking beyond the surface and allowing the viewer to create, Inkquisitive’s art is masterful.

His portrayal of Balram is unparalleled and not one to miss out on.

The movie that marked Inkquisitive’s tenth-year celebration, The White Tiger, is available on Netflix.