The Art of Contemporary Indian Cooking

Thankfully, the days when the vile Vesta curry was the be-all and end-all of the British understanding of ‘Indian cuisine’ are but a distant memory.

The nation’s food culture has come a long way, and now incorporates Indian food as a very vital part of a vibrant multicultural mix.

And nobody better embodied the spirit of the UK’s appetite for a spot of spicy adventure than The Incredible Spice Men.

Since Cyrus Todiwala and Tony Singh teamed up on our TV screens last year, viewers have been inspired to ‘Indianise’ anything and everything – from bread and butter pud to good old gammon. 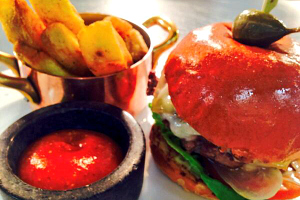 But cross-cultural mashups don’t always work so well. In the wrong hands, they can be absolutely disastrous, giving rise to such culinary calamities as chicken tikka masala lasagne, ‘curry’-flavoured baked beans and chocolate chicken curry.

Misguided inspirations, a lack of understanding of flavour or a poor grasp of Indian cooking technique can leave a very bad taste.

On the other hand, when you hand things over to a highly-skilled chef with an intuitive understanding of Indian cuisine, tradition and modernity can coexist; each perfectly complimenting the other.

The approach is heralded as modern indeed, incorporating classical French flair in a similar ‘innovative Indian’ manner to Vivek Singh, who pioneered the upmarket approach at The Cinnamon Club a decade back. 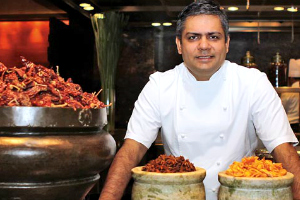 But there’s also some recognisably Raj-era influences at play; displaying how British and Indian cuisines have comfortably co-existed and cross-pollinated since the 19th century.

Four centuries before, Goan’s cuisine was being shaped by the Portuguese who arrived in 1498. And now, Cyrus Todiwala is shaping London’s restaurant scene with his very own premises exploring Portuguese-influenced preparations.

In a world where foodies have endless appetite for the new and novel, it’s a bold move – showing how delving back to the distant past can actually be deeply innovative.

Turban Street Cafe’s Ash Bhatia is just as excited by exploring heritage cuisine as Cyrus is. Both chefs examine both the roots and shoots of Indian dishes; placing emphasis on origins as they seek to take a dish into new territory with a bit of boundary pushing. 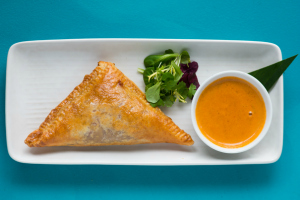 Over at The Park Cafe in East London, managed by Cyrus’ son Jamsheed, the menu often has a subcontinental slant. Chai flies out of the kitchen, and classic British brunches are given a distinct Indian accent.

Talking of Indian Accent, the New Delhi restaurant that goes by that very name is reinventing Desi dishes left, right and centre – de- and re-constructing and redefining expectations.

In Britain, Meera Sodha has the same aim. Her new cookbook, Made In India is subtitled Cooked In Britain, and she, just like the tome, is influenced by both countries and cuisines. 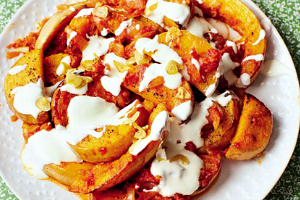 The recipes are at once authentic and achievable. The proof of the pakora is in the sales figures; accordingly, the book shot to the top of Amazon’s bestsellers list instantly.

Masala Library might sound literary, but it’s not literally a house of books; rather, a house of haute cuisine. Mumbai’s own molecular gastrohub, if you will.

Jiggs Kalra’s food makes you stoke your chin and lick your lips. Memorable dishes like mishti doi sorbet lollipops make you smile – the humorous presentations underpinned by four decades of serious research by the chef.

Another chef serious about modern Indian food is Gaggan Anand – whose ethos at his eponymous restaurant, Gaggan Bangkok, is ‘authentically Indian, globally-inspired’.

The menu reads as a many-chaptered book; featuring items including ‘Treasure These Shells’ – Konkani clams with Chardonnay; the futuristic papdi chaat, ‘Chowpati Year 2050’; and a devoted ‘When India Met Italy’ section. 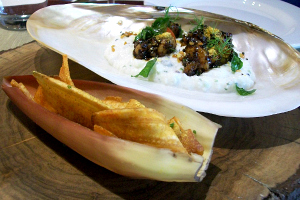 In Brighton and Ireland respectively, the Curry Leaf Cafe and Iyers offer absolutely authentic Indian meals miles away from whence they came.

Then you have Britain’s ultra-modern Indian innovators – Atul Kochhar, Dev Biswal and That Hungry Chef Pratap Chahal – all taking subcontinental cuisine in yet more diverse directions.

Make room, too, for myriad supperclubs and street food artisans; all working hard to hone the fine art of introducing both authentic and contemporary Indian dishes to a new and very receptive audience.

One thing’s for sure – Indian cuisine is evolving. Forget the ultimate destination; just sit back and savour the journey.

Food writer Zoe has no ties to the subcontinent beyond a deep love for its cuisine. When not eating, you’ll find her writing, talking, or reading about Indian food. Her motto? 'The food supplies the tie that the umbilical cord did not.'
Glasgow’s Best Desi Restaurants
Flavours Restaurant ~ Food with an Exotic Twist